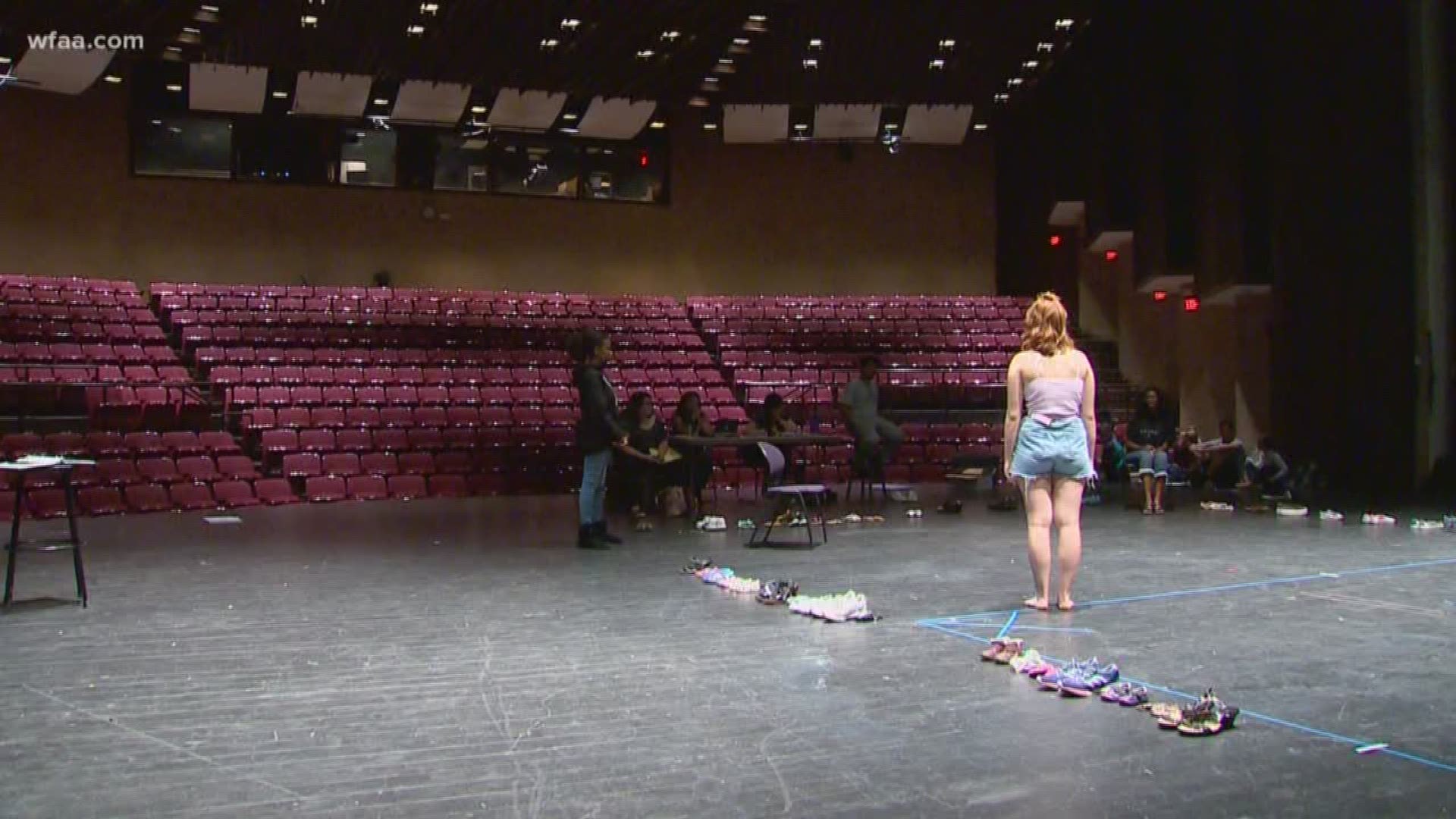 “So, it was 154 shots in five minutes. Continual. All in five minutes. It was fast,” she said, with panic in her voice. “Do you open the door when you hear all that racket out there and that noise? I didn’t know what to do and I told the kids that.”

It was a rehearsal for a play, and Angie was convincing in character – maybe because her lines weren’t written for her. They were said to her.

“To actually go and meet these people,” Angie said. “That was intense.”

Angie portrays a second-grade teacher from Sandy Hook Elementary in Newtown, Conn., who huddled with her students and survived a 2012 mass shooting.

Angie and other teenage members of Dallas-based Cry Havoc Theater Company traveled to Newtown and Washington, D.C. during their spring break. In May they attended the NRA convention. They recorded interviews with victims of gun violence and backers of the second amendment and turned the interviews into a script for Babel, a documentary-style play now in rehearsals. Babel refers to the Tower of Babel, the biblical story of people who speak different languages.

“It’s such a polarizing topic that when you’re in the same room with people with an opposing view, it’s something you avoid speaking about,” Angie said. “To actually see some improvement and to make compromises and change, we all just need to start talking to each other about it.”

“I say in every interview that I’m not anti-gun,” she said. “I am a gun owner who thinks there should be certain limits and limitations in access to guns for certain people and certain types of weapons.”

“It’s really important to represent as many points of view as we can so that when somebody comes to the show there’s at least somebody they identify with,” she said.

The production also touches on suicide by gun.

The process has taken an emotional toll on the teenagers who’ve been working on it since January.

“Sometimes we have debriefing circles and we’re like, ‘Oh my God! I’m so sad all the time!’ or ‘I’m overwhelmed’” Angie said.

But she said it’s also given her a new respect for differing opinions.

Her castmate Trinity Gordon, 18, portrays a mom who lost a son in the Sandy Hook shooting.

“You really have this responsibility to tell their story in the most accurate and genuine and authentic way you can,” she said.

Trinity graduated from Skyline High School in May and in the fall will attend Columbia College in Chicago to study theater.

“The Santa Fe shooting happened the day before prom and I just had to turn my phone off,” she said. “I needed to enjoy the weekend. I’d been working on this for six months and gun violence had been surrounding me.”

“I think the truth of this production is that no one has an answer,” she said, “and that’s really hard for people to admit.”

Richards Bim choked back tears as she described how proud she is of the actors.

“They’re from different neighborhoods and different backgrounds. They go to different schools. They’ve traveled together and sometimes have not gotten along,” she said. “They figured out how to get along and they’ve tackled a really difficult topic. So, I think that watching them do that gives me hope that maybe the rest of us could [do the same].”

Babel opens July 6 at Hamon Hall, in Dallas’s Winspear Opera House. An art installation will accompany the show. The installation features 7,500 shoes, which represent the estimated number of people who’ve died by gun violence in 2018.