Flights were delayed or canceled at Dallas/Fort Worth International Airport and Dallas Love Field. 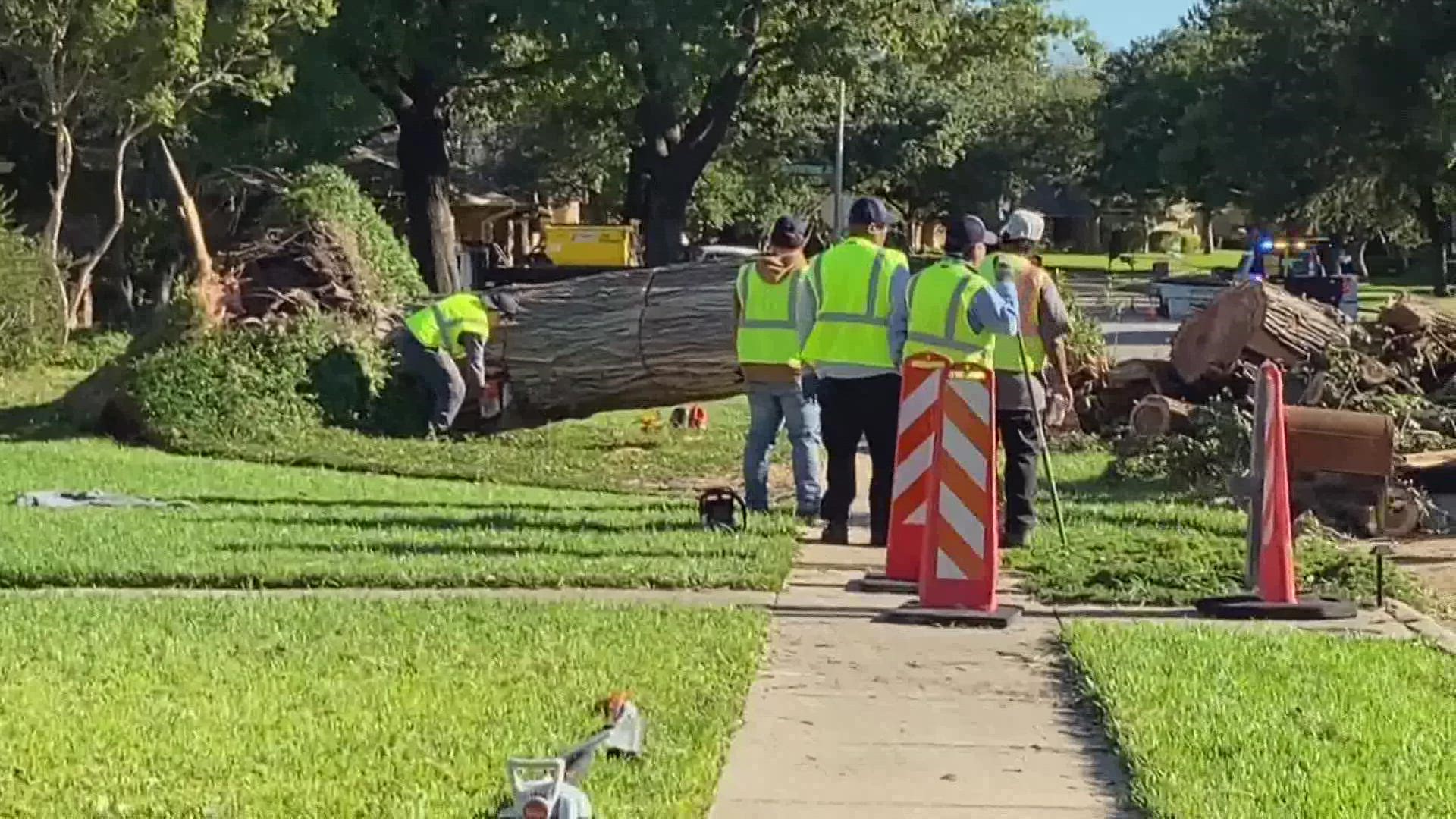 Shortly before 6 p.m. Friday, Oncor was reporting 656 power outages impacting 10,025 customers across Texas. During peak outages on Thursday, over 100,000 customers were left without power due to winds.

Viewers shared images of toppled trees, blown over barns, and twisted trampolines, thanks to the powerful gusts.

When will the strong winds end?

Notice how wind gusts really start to decrease around sunset. There will still be a breeze this evening into tonight, but nothing close to what we have dealt with yesterday and today. #wfaaweather pic.twitter.com/zDKgkBEzeG

We're keeping track of any weather-related delays and conditions here:

Oncor, as of 6 p.m. Friday, was reporting 656 power outages in Texas, impacting 10,025 customers, according to its online outage map.

In North Texas, outages were reported in McKinney, Dallas and Arlington, among other cities on Thursday. Around 2,600 customers are still without power in Dallas and Tarrant counties, according to the latest report from Oncor.

Oncor posted a weather alert to its website, warning about the windy conditions. The electric provider said it was prepared to respond to any outages caused by the gusts. To report an outage, call 888-313-4747, test OUT to 66267 or use Oncor's online outage report.

Among the outages was a widespread outage in northwest Carrollton, which knocked out power to several traffic signals in the area of Hebron Parkway and Texas 121, police said. Officers will be in those areas to help direct traffic.

Along with crews from West and East Texas, Oncor said it deployed crews from out of state to help make repairs throughout Texas. Contractors from neighboring states and Alabama and Missouri were among those deployed, according to Oncor.

The company could not confirm the number of transformers that were affected in the service area, but did say that downed transformers contributed to 100,000 outages Thursday. Transformer incidents are tracked whenever the transformer comes into contact with anything, be it debris, patio furniture or other equipment. Dallas Fire-Rescue said it responded to 52 transformer calls Thursday.

The entire 1500 block of Elm Street had to be shut down for a time on Thursday afternoon after "large debris" was seen falling off of the 9th-floor pool deck of the National High-Rise Residences at 1401 Elm Street, Dallas police said.

#TrafficAlert in the downtown area. https://t.co/zEVp0UnNHZ

DFR working hard to keep debris from falling onto our streets. Stay safe and avoid the area for now. pic.twitter.com/eTYyEl1gID

Just before 7 p.m. Thursday, American Airlines said it canceled 250 arriving and departing flights out of D/FW due to weather.

Because of the wind, the airport was only using diagonal runaways.

An airport weather warning was issued at DFW until 5 p.m. Friday due to strong wind gusts.

Dallas Love Field on Thursday morning was experiencing delays, on average, of 32 minutes for inbound flights at their point of origin, according to FlightAware.

Despite the delays at Love Field, Southwest officials said their operations were "running pretty smoothly" with no major weather issues.

"Extreme care is urged during all outside activities where there is potential for grass fires to get started," the Weather Service said in a statement.

In Shackelford County, about 140 miles west of Fort Worth, crews worked to put out a large grass fire along Highway 283. The highway had to be shut down in both directions near County Roads 190 and 191.

Officials said high winds fueled the fire. According to the Texas A&M Forest Service, the fire was 100% contained as of 9:30 p.m. and 191 acres were affected.