Denton police, fire chief issue plea for drivers: 'Move over or slow down'

"Luck was on our side this time, but [in] hindsight we could be dealing with severely injured, if not fatalities," said Denton Fire Chief Kenneth Hedges. 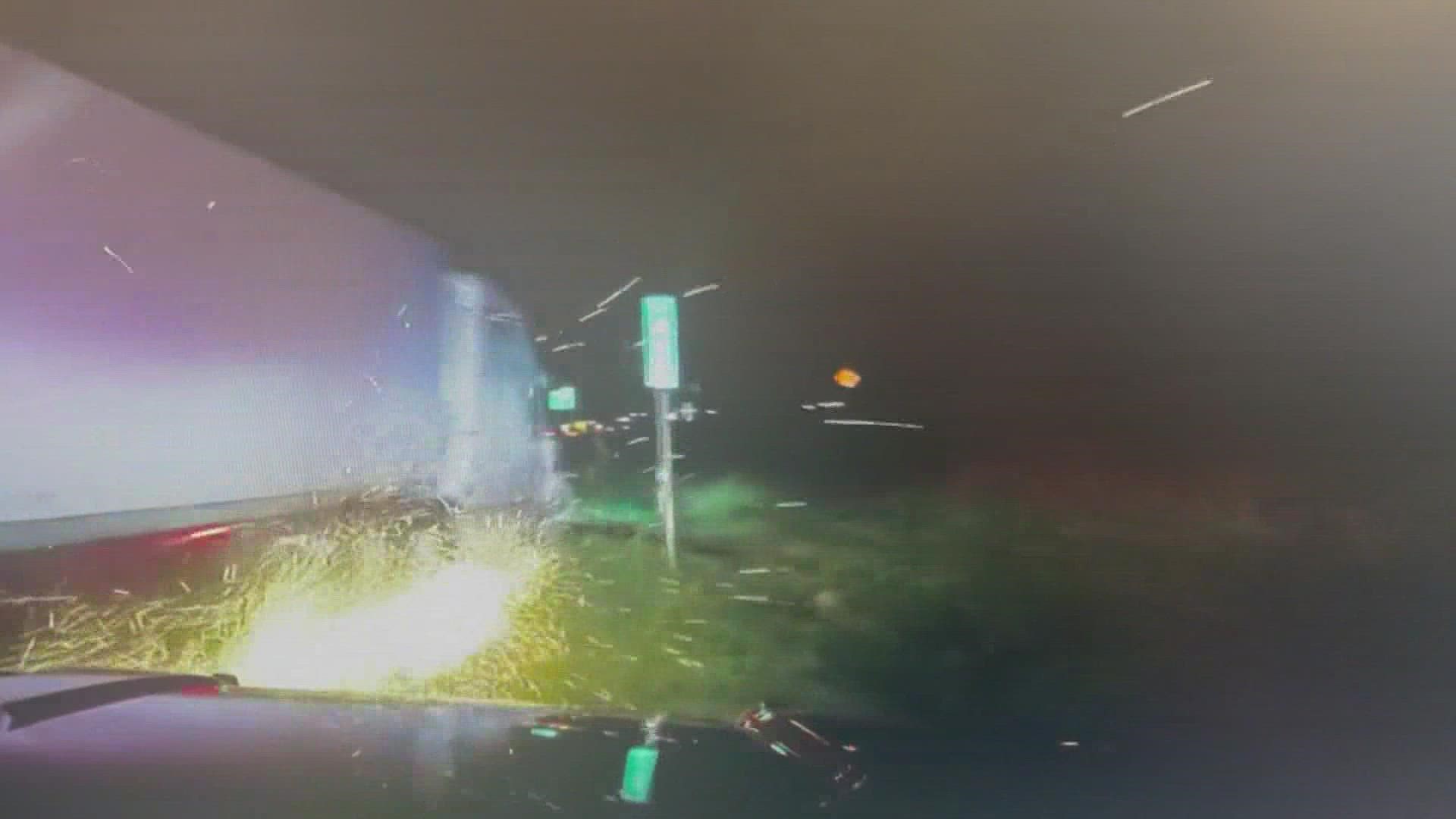 DENTON, Texas — From first responders to construction workers, their jobs are dangerous along some of our busiest roadways.

Video of a Monday night wreck along Interstate 35 reviewed by Chief Kenneth Hedges of the Denton Fire Department is proof.

"Once the video was uploaded and I was able to review it internally, that's when that surreal feeling hit that we very well could have had five severely injured, if not killed, employees from one minor incident," Hedges said.

What started as a small grass fire Monday night on I-35, just north of Elm street in Denton, could have ended much worst.

"I did do a count," Hedges said. "Twelve seconds after they left their position, the tractor trailer comes into the camera view.”

The driver of a big rig plowed through two fire vehicles used to block the roadway.

"Luck was on our side this time, but hindsight we could be dealing with severely injured, if not fatalities," Hedges said.

It’s also a reminder of the importance of Texas’ “Move over or slow down" law.

As someone whose goal is to protect his team at all costs, Hedges can barely stomach the what-ifs.

"Worst case scenario, you had five employees standing there in the exact location and the truck slid through," Hedges said. "How do you approach five different families and say you failed on your job to protect your employees?"

This tweet from Denton police Chief Frank Dixon reinforcing the dangers while working alongside busy highways. The city has seen three emergency vehicles struck in the last 30 days.

We have had 3 emergency vehicles struck in the last 30 days, including 2 fire apparatus last night. Please pay attention, don’t drive distracted or impaired and move over or slow down. Someone’s life depends on it! #RelationalPolicing https://t.co/JXYEDGTwic pic.twitter.com/kONitSUYD1

"I want people to understand that it's not just first responders who were out trying to protect with this 'Move over or slow down law', it's everyone out doing a service, whether it's a tow truck driver, maintenance crew, a construction crew, or first responder," Dixon said.

Texas law requires drivers to move over a lane or slow to 20 mph below the posted speed limit when approaching emergency or other highway construction vehicles using visual signals or flashing lights on the roadside.

Less than six months ago, Dallas police officer Mitchell Penton was killed while blocking a crash scene on the Central Expressway.

RELATED: Dallas Police sergeant who survived being run over by SUV takes to the road again to honor fallen officers

His death and others across the state is why both chiefs believe this video should serve as a reminder of the dangers posed while working alongside busy highways.

"Everybody needs to be able to go home safe at the end of the night," Dixon said.

The driver of the big rig that plowed through the two barriers had a severe head injury and was transported to the hospital. The investigation into the circumstances surrounding exactly what led to the crash is ongoing.