Testimony begins in trial of doctor accused of 'carnage' 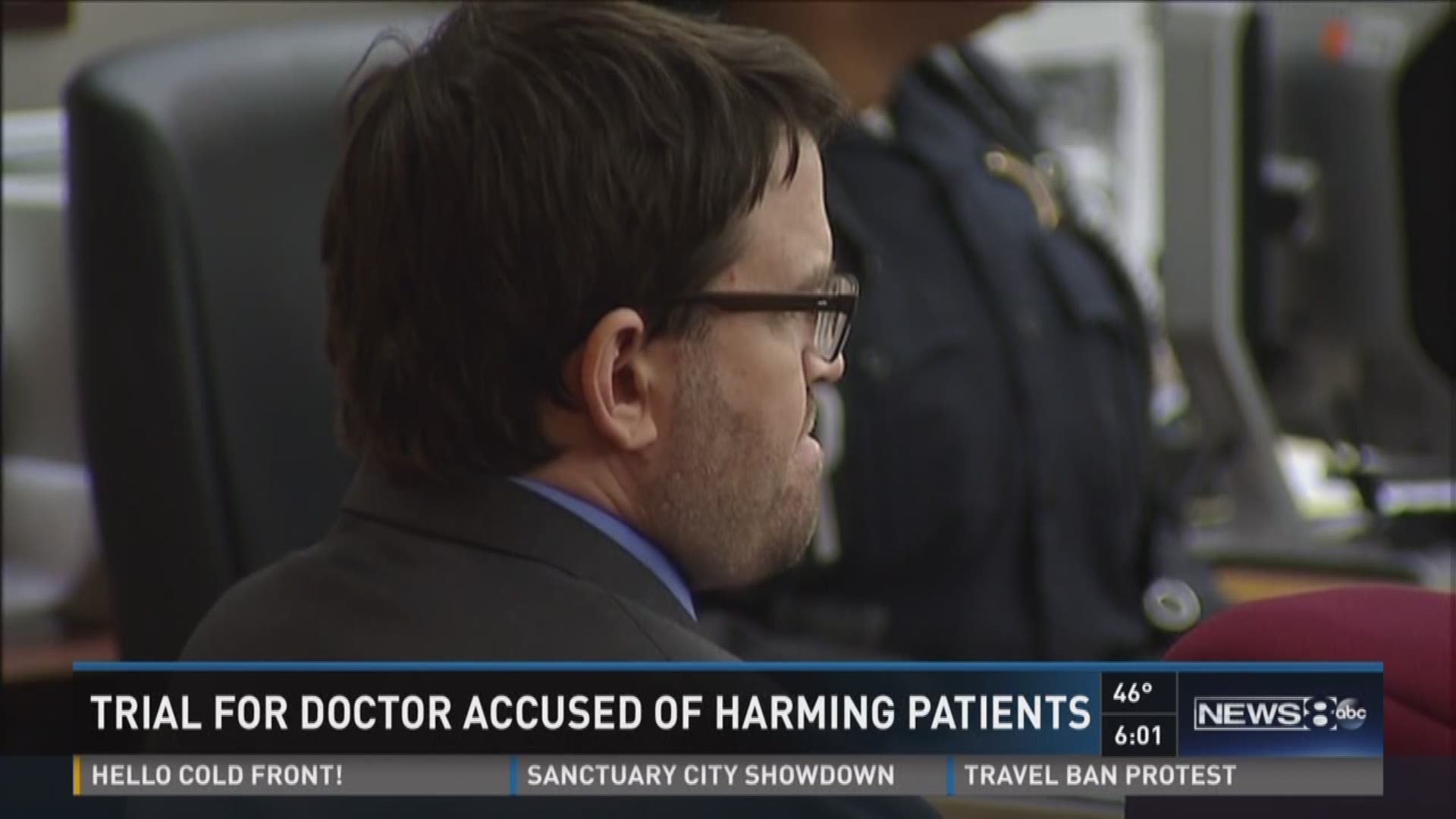 “The carnage he caused was not a mistake or an accident or just malpractice,” Michelle Shughart told jurors.

In her opening statement, Shughart described the litany of botched operations, paralyzed patients and deaths connected to surgeries performed by the once-respected spinal surgeon. He was stripped of his license to practice medicine in 2013.

The patient in that case, Mary Efurd, rolled into court in a wheelchair to testify against the doctor she blames for putting her there.

She'd gone to Duntsch in 2012 because of chronic back pain. Then 74, she woke up from spinal fusion surgery at Dallas Medical Center in excruciating pain.

“I could not move my feet and legs,” said Efurd, a former teacher’s aide. “I couldn't turn over in the bed. And my thought was something is wrong.”

When the hospital administrator told her that Dutsch wanted to operate again, “I said, ‘He will never touch me again. I said something is wrong, bad wrong.’

The hospital kicked Duntsch off the case and brought in Dr. Robert Henderson.

“He did virtually everything wrong so to be able to do everything that much wrong I felt that he must have known at some point in time how to do it right,” Henderson said. “It was that egregious.”

Henderson testified for hours in court describing the extent of the botched surgery: Holes in the bones that shouldn’t be there, holes in the outer membrane surrounding the spinal cord causing spinal fluid to leak and an amputated nerve root.

A screw had been put in the wrong place and an implant device wasn’t even in the spine. It was just lying in the muscle, he said. And Duntsch had destroyed muscle to make a tunnel to put the device into.

The surgery had gone so horribly wrong that he thought Duntsch might even be an imposter.

“I became concerned about whether he was a physician and was a surgeon,” Henderson said.

“Why?” the prosecutor asked.

“Because it was such a tragedy inside what had happened,” he responded.

The mistakes were so horrific he requested a photo of him and sent it to Duntsch's former fellowship director asking if it was Christopher Duntsch. The director's response, that's him.

“Did he follow the Hippocratic oath?” the prosecutor asked.

“It's a major tenet. First do no harm. He certainly didn't,” Henderson said.

On the same day he operated on Efurd, Duntsch also operated on 64-year-old Floella Brown. Her surgery was earlier that day.

“The defendant took off too much bone off her spine and cut her vertebral artery, depriving her brain of the oxygen rich blood that it needed and overnight she had a stroke,” Shughart said. “As Floella’s brain is swelling and she is beginning to die, he goes into Mary Efurds surgery.”

Prosecutors also are expected to present testimony from other former patients: Barry Morguloff, who woke up from surgery unable to feel his foot. Jerry Summers, Duntsch’s childhood friend, is now unable to walk, dress himself for feed himself after a botched surgery at Baylor Plano Hospital in 2012. Summers has feeling in his arms and legs, but he can’t move them.

A few weeks after Summer’s surgery, a school teacher named Kelly Martin decided to have surgery before going on a cruise.

Baylor forced Duntsch to take a leave of absence from operating, but didn't report the botched surgeries, testimony showed. Duntsch resigned from the hospital. Not knowing about his history, Dallas Medical Center hired him. In his first week on the job, he performed the surgeries on Efurd and Brown.

Duntsch's attorneys agree he made mistakes. They just say prosecutors can't prove it was knowing, reckless or intentional. The trial is expected to last several weeks.

Dutsch is currently in the Dallas County jail, where he's been since his indictment in 2015.