A second mother who received a uterus transplant has given birth in Dallas. 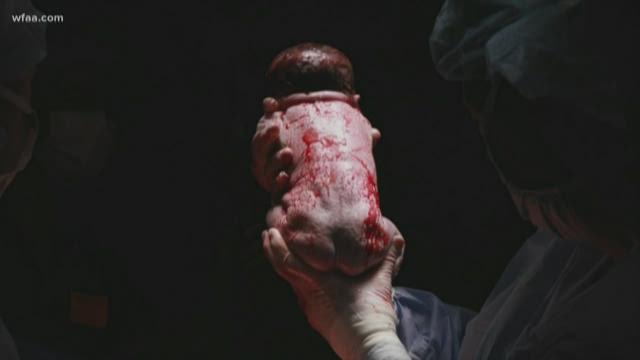 A second mother who received a uterus transplant has given birth in Dallas.

You know you’re important when an entire team of doctors shows up to celebrate your birthday.

“This is a great moment for all of us,” said Dr. Giuliano Testa, transplant surgeon and leader of Baylor’s uterus transplant clinical trial. “You can see we are very happy."

They’re all smiles for a healthy baby girl born in February weighing 6 pounds, 7 ounces. She is the second baby born at Baylor to a mother who received a uterus transplant. The first baby—a boy—was born to another woman in December.

“It's very exciting every single time,” said Obstetrician Robert Gunby. “Of course, the first one has a special place in your heart; You can't replicate a first time again, but it's still just as exciting as the first time for that family."

One in 5,000 women is born without a uterus meaning their reproductive system starts to grow but doesn’t completely develop. The condition is called MRKH – which stands for Mayer- Rokitansky- Kuster- Hauser syndrome. Through a major research trial, doctors at Baylor University Medical Center in Dallas screened donors and recipients to match them, and ultimately to give more women with MRKH the chance to carry and deliver their own babies.

“We spend a lot of time with both recipients and donors asking the motivation-- the why's -- because I think that is a good question to know,” said Dr. Ann Marie Warren. “What is fueling that decision-making to go through this process?"

The process is incredibly complex and very new. The fact that Baylor has now delivered two healthy babies puts them at the top of their game. So the Dallas researchers are sharing what they’ve learned from doctors in Sweden and Brazil who have also delivered babies following uterus transplantation, with big names in American medicine like Cleveland Clinic, Mayo Clinic, Yale and Cedar Sinai. Their goal is to replicate more such births.