Across the tornado zone, hundreds of other families are either underinsured or completely uninsured. But according to the federal government's count, not enough households were impacted to qualify for FEMA individual assistance.

ROWLETT -- All that's left of Lindsay Diaz's first home is a shell of a building on Calypso Drive.

Windows are busted, the floor rippled, and the ceiling is open to the sky.

Until the tornado hit on December 26, she lived in her half of the duplex with her infant son. They survived, but Diaz, 30, was soon hit with another blow: She learned her insurance wasn't enough to rebuild. 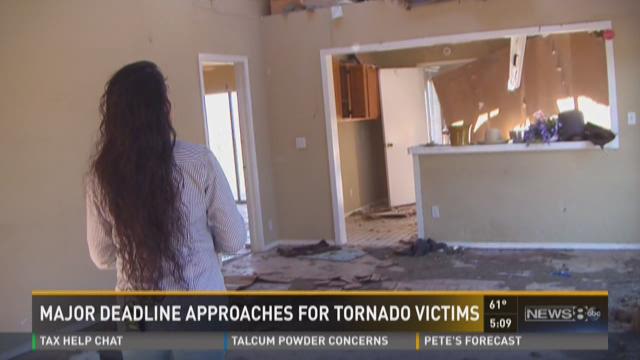 Across the tornado zone, hundreds of other families are in the same position -- either underinsured or completely uninsured. But according to the federal government's count, not enough households were impacted to qualify for FEMA individual assistance.

FEMA is providing assistance for municipalities to rebuild and clean up, but it's no comfort to homeowners like Diaz, who are trying to figure out how to bridge a big funding gap.

"I was very upset," she said. "I was looking forward to FEMA helping us and providing the extra funds to rebuild."

Lindsay Diaz and her infant son survived the December 26, 2015 tornado that struck their Rowlett home.

She has created a GoFundMe page to try to raise the funds herself, but there is a chance the FEMA decision will be reversed.

The State of Texas is now appealing FEMA's decision and hopes a nine-question survey will make the difference by updating the household count. They're asking anyone impacted by the tornadoes to fill it out, either on a computer or mobile phone at this link:

The deadline to complete the survey is Sunday, February 28. In Rowlett, they're alerting residents with roadside flashing signs.

"We're trying to do everything we can to get everybody to respond," said Brian Funderburk, Rowlett's city manager. "In some cases, it may not be their home. They could have had medical issues, or maybe their car was damaged."

When Diaz heard about the survey, she filled it out immediately and sent it to neighbors. She's hoping word gets out, and that this count can secure federal assistance.

"If you go through Rowlett, at a lot of homes, nothing's being done to them. Maybe people are waiting on the funds," she said. "The sooner we get this, the quicker we can rebuild and get back into our homes."