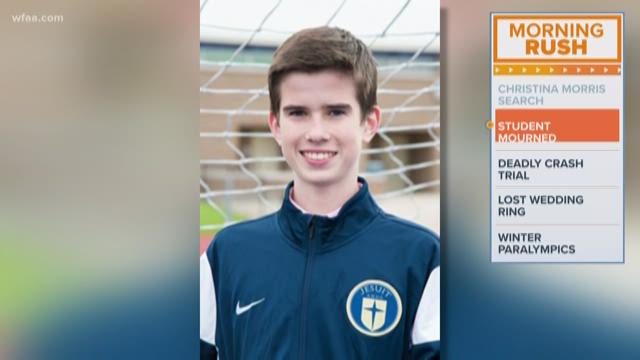 A fatal accident on the Dallas North Tollway near Walnut Hill on Wednesday evening has killed a teenager.

Around 10:15 p.m. a white Mercedes car was traveling north on the Dallas North Tollway near Walnut Hill. Authorities say traffic was slowing or stopped for a lane closure in a work zone.

Police say for an as yet undetermined reason, the driver of the Mercedes, 29-year-old Terrelwin Jones did not slow down and struck several vehicles including a Ford pickup, a black Toyota pickup, an Acura and a Nissan Maxima.

The first car to be hit was the 2012 Acura TL driven by 40-year-old Neil Delaney. 15-year-old Jesuit student, Guy Delaney was a passenger in that car.

The Acura caught fire after the impact. Both Neil and Guy were taken to Parkland Hospital. Guy died as a result of injuries he got from the impact. Neil sustained non-life threatening injuries.

Jones was not injured in the accident.The occupants of the Nissan Maxima, Toyota Tacoma and Ford F-150 sustained non-life threatening injuries.

The roadway was closed until approximately 4:30 a.m Thursday.

Right now the investigation is ongoing and no additional information is currently available.