Last year, 3,600 students enrolled in Dallas ISD and met qualifications as homeless. This year, that number climbed to 4,400. 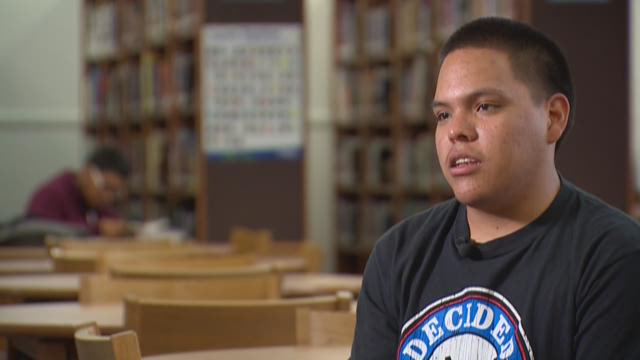 DALLAS – As if high school isn't hard enough, there's one thing that Julian Rodriguez never liked to talk about.

"I don't want people judging me on my background,” he said.

But the graduating senior agreed to speak candidly to WFAA about growing up with no place to call home.

"My dad was selling drugs when I was little. There was a point we had two cars, a truck and our own house and anything else we wanted. Then he got caught up and went to jail for a little bit," explained Julian.

When his dad went to jail, Julian and his family were left homeless.

"I could have been homeless and had nowhere to go. Anybody could have just closed their doors on us and told us no and there are some people out there like that,” he said. “That's what keeps me grateful is that people were open to [it], even if it was just for the night and that's all they could offer."

For ten years, he and his siblings bounced from bed to bed and couch to couch with relatives and friends.

Still, he stayed in school and on Saturday, Julian will graduate in the Class of 2017 from North Dallas High.

His story is part of a troubling trend at Dallas ISD. The rising cost of real estate and the lack of affordable housing in this city have led to a 25 percent increase in homeless students in the district.

"We have a lot of families that are living in hotels and motels. The shelters are full. That's a big problem we have right now," said Mark Pierce, who manages DISD’s Homeless Education Program. "We want them to feel like coming to high school is a safe place to be."

Last year, 3,600 students enrolled in Dallas ISD and met qualifications as homeless. This year, that number climbed to 4,400.

"A lot of our things come from community donors," said Sherrie Cleaver, the social services advisor at Dallas ISD, as she showed a neatly organized room with clothes and hygiene products for those children.

Dallas ISD is adding what it calls “drop-in centers” at high schools across the district. They’re intended to provide homeless students with everything from food and clothing to DART passes and school supplies.
Pierce said he is now beginning to get requests for air mattresses.

"Sleeping bags go primarily to the hotels because if you have a family of four or five living in a hotel room, there's going to be at least one or two kids sleeping on the floor for one reason or another," explained Pierce.

"I was kind of star struck that I made it to college," said Julian.

Texas Tech accepted Julian and he received almost $10,000 in grants.

Separately, Julian's dad got out of jail, has a job now and last year got him and his siblings off the street.

"Me and my dad, we do a lot of talking,” said Julian. “He's proud of me and that although he didn't give us the best life growing up, he just wishes we would make the right decisions for us."

At age 17, that’s something Julian has done.

"In five years I plan on graduating from Texas Tech, the college of my dreams and on my way to start the career of my dreams,” he said adding that he wants to be a doctor.