In the beauty of the Great Trinity Forest, the ugly signs are everywhere with plants ripped up and ground trampled. 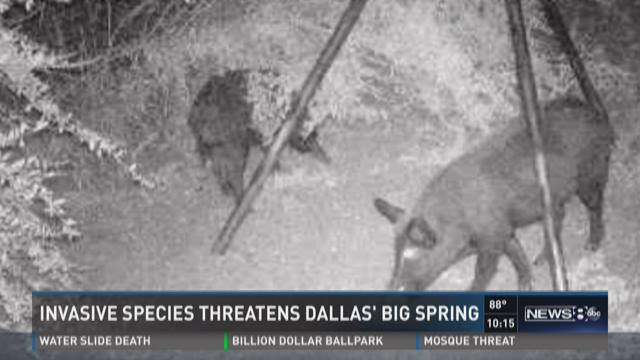 DALLAS -- In the beauty of the Great Trinity Forest, the ugly signs are everywhere with plants ripped up and ground trampled.

"It looks like someone has fired an artillery shell here," said conservationist Ben Sandifer as he surveyed the damage along the bank of Lemmon Lake.

Sandifer says the culprit is clear. It's all damage from feral hogs. He's seen the animals in the forest here for years, but now he says the invasive species has gone too far out of control damaging the land and the environment.

"It is getting much worse," Sandifer said. "The perfect conditions for hogs exist here, where you have an ample supply of food, ample supply of habitat and you don't have any predators here."

He says they're now destroying parts of Big Spring, the natural site in the Great Trinity Forest that was protected from humans earlier this year as an historic landmark.

"Unfortunately we're seeing wave after wave of hogs come into the Big Spring area, which has seen an enormous amount of volunteer work, plantings that can be destroyed by feral hogs," Sandifer said.

Different parts of the forest are controlled by different parts of city government, so Sandifer would like to see a citywide trapping program put in place, like the one operated by the City of Dallas Park and Recreation Department.

"You're dealing with an animal that is incredibly smart, which is one of the reasons that we have an exact protocol in place on how we do our trapping," said Brett Johnson, the senior environmental coordinator for the department who manages the trapping program.

Brett Johnson, the senior environmental coordinator for the department who manages the trapping program, says trapping is more effective than hunting.

Johnson has been studying the feral hog problem in North Texas for over a decade and joined the city earlier this year to develop solutions. The animals are known destroy parts of public parks, leading to costly repair work.

He showed News8 a trap that is equipped with a wireless camera and remote control operation. The department is using a strategy to ensure that the hogs don't learn to fear the traps and avoid them.

"Our ultimate goal with the program is not to educate the pigs and to see a reduction in damage," Johnson said.

He says trapping is more effective than hunting, and that more pigs have been captured as ground has dried over the summer.

City government is expected to meet later this month to work on a wider approach to the feral hog problem. Sandifer says in order to protect sensitive natural sites, a broad and aggressive trapping program is essential.

"The problem is that, while we have a really good Parks and Recreation Department that's coming up with solutions, other departments haven't gotten on board yet," Sandifer said.