Authorities are reviewing Brian Clyde's social media activity as they search for a motive and the gunman's state of mind. 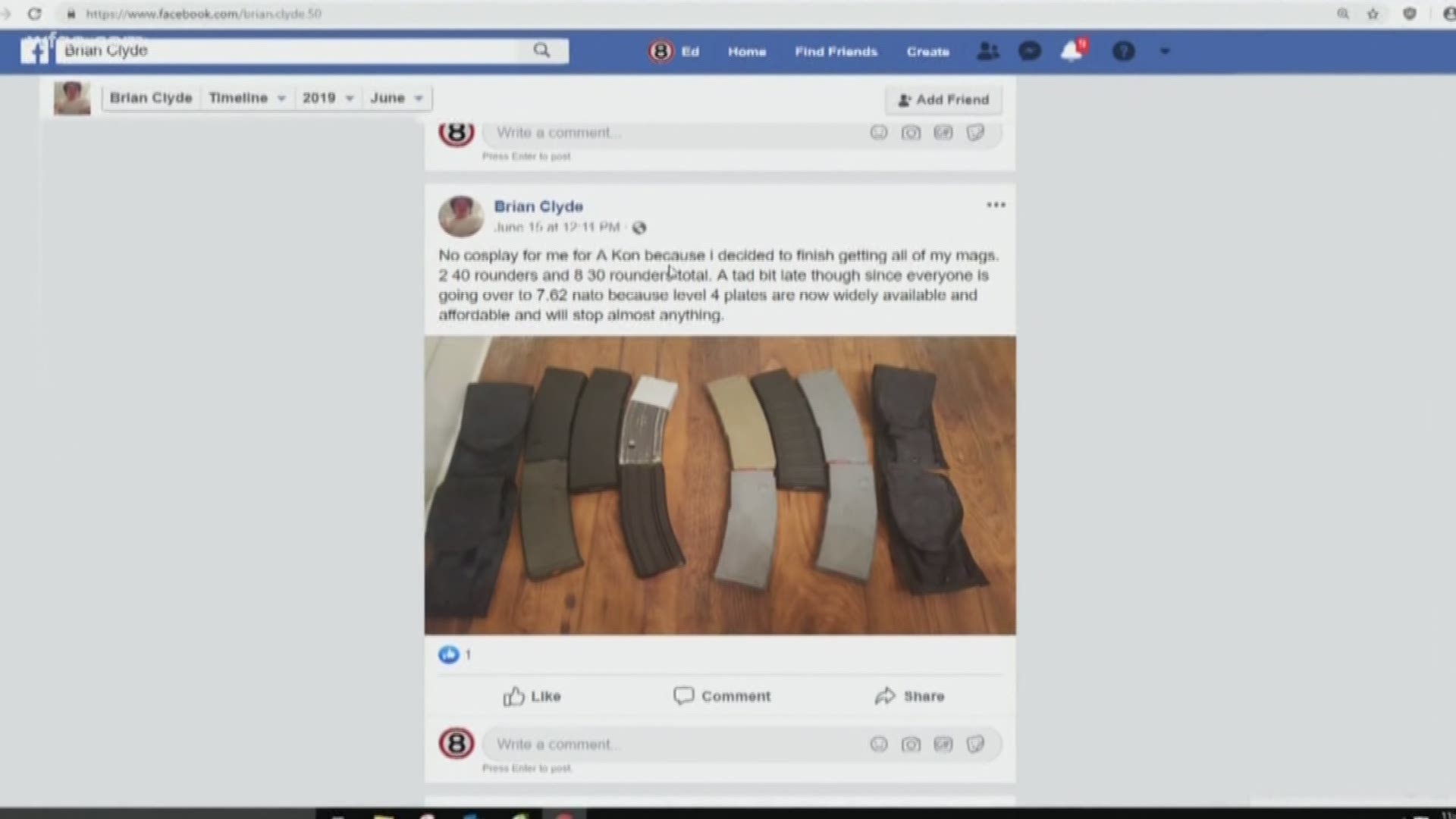 DALLAS — Brian Isaack Clyde was masked and armed with five 30-round magazines when he was shot outside a federal courthouse Monday in downtown Dallas.

Hours after he was killed in an exchange of gunfire, his social media was under scrutiny by law enforcement in search of a motive.

Clyde, 22, withdrew from Dallas Independent School District in March 2012, according to district officials. He enlisted in the Army on Aug.10, 2015, attaining the rank of private first class in the infantry. He was honorably discharged Feb. 17, 2017, records show.

Clyde only served a year-and-a-half in the Army because he could not pass his physical training test and was not deployable. That's according to several individuals who served with Clyde in the 101st Airborne at Fort Campbell, Ky.

FBI officials said Monday Clyde was not known to them or under investigation at any point. But some of his social media posts, while not illegal, are disturbing.

Clyde’s Facebook page features multiple references to guns, the military, gaming, pop culture, swords, and cosplay — dressing up as fantasy characters, including in suits of armor, and reenacting battles.

RELATED: Gunman killed in shootout with officers outside federal courthouse in downtown Dallas

Only in the past few months did his posts turn sinister.

Some of Clyde's posts refer to him buying assault rifle parts and assembling them. The practice is legal, but can be used to assemble guns that cannot be easily traced. It’s unclear if the weapon used Monday was made in this way.

Here are some highlights from his now deactivated Facebook feed:

Clyde posted a disturbing video of himself talking about wanting to eat people. “You don’t want to get in my way when I’m angry because I don’t see you as a person. I see you as food.” Later, he says: “I want to eat you. You’re going to be tasty.”

He posted an image of what appears to be the lower portion of a rifle. “Getting incomplete lowers is one way to get around California's asinine gun laws.”

He made what he called an AR-15 ASMR video in which he records himself loading a rifle.

He posted videos of himself shooting a revolver and a semiautomatic rifle at a paper target outside somewhere. “I have the power of God,” he says. “I’m going to get you for what you said to me." The bottom of the rifle magazine has some sort of symbol painted on it, according to Clyde, “…so that way when you die, it takes away your soul. This here’s an evil weapon, y’all.”

He posted a video of himself giving a speech at a ceremony where he received an outstanding student award from Del Mar College in Corpus Christi. “Military has always been big in my family, and so has education,” he says at the podium. “My mom has a master’s degree, and she’s also from another country." He then apparently references his service in the U.S. Army. " When I got out, I really didn’t have any other options, so I figured, go to school. That’s what my mom would have wanted.” He also alludes that he received help from the military to go to school.

He recorded a video of himself drinking red liquid saying: “I’ll show you who’s power is greatest…”

On the day strong storms with damaging winds swept across North Texas knocking out electricity to hundreds of thousands of people, he posted a video of himself in a dark room with candles lit. He brandishes a rifle and says: “I don’t know how much longer I have, but a [expletive] storm is coming. However, I’m not without defense. [Expletive] ready; let’s do it.”

The FBI said they are also talking with family members as they work to get an idea of Clyde's state of mind.