The City of Dallas said Tuesday it will look at installing a fence around the abandoned Reunion Arena parking garage after it discovered more than 100 vehicles were using spaces in the shuttered structure daily. 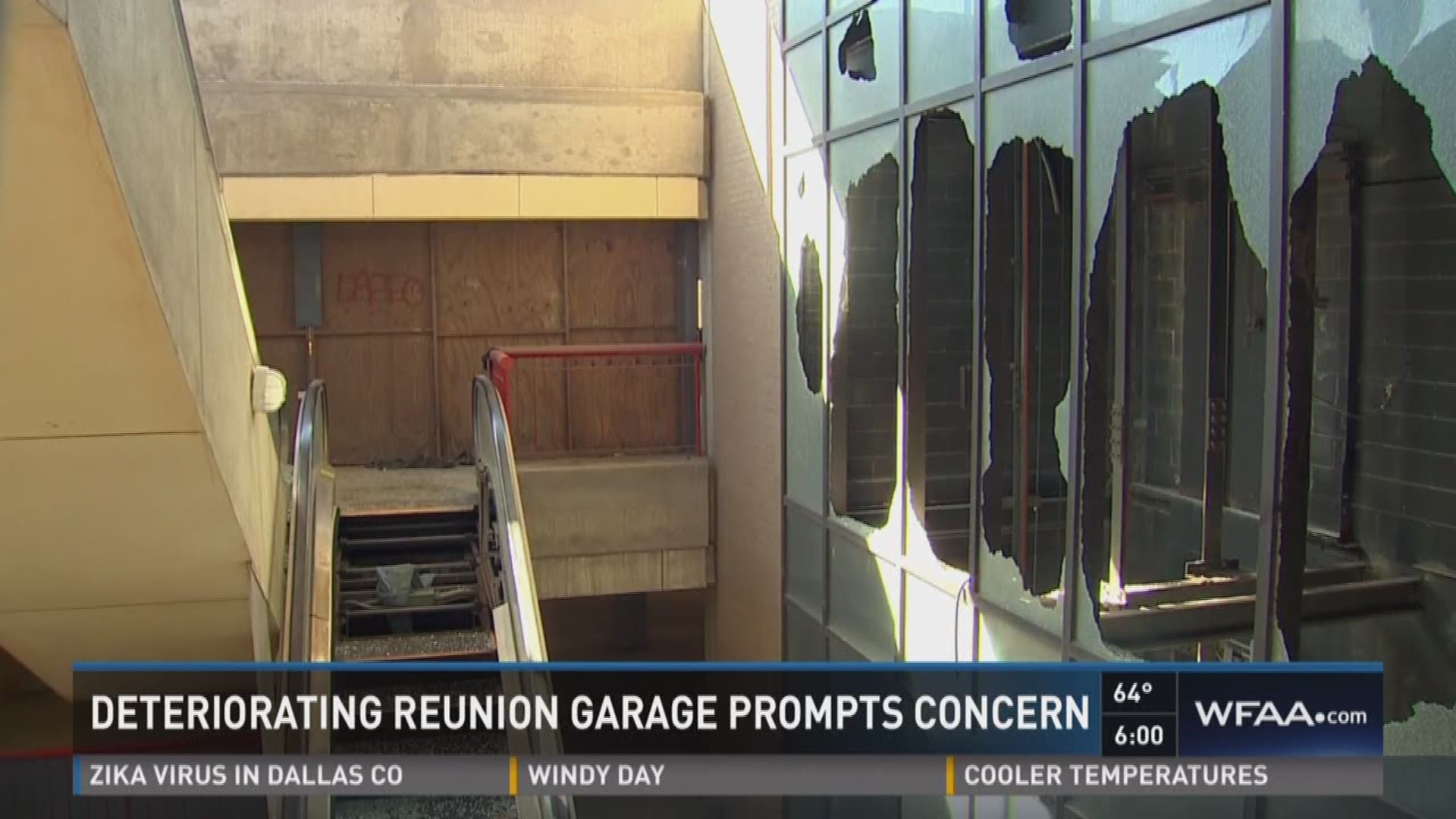 DALLAS — The City of Dallas said Tuesday it will look at installing a fence around the abandoned Reunion Arena parking garage after it discovered more than 100 vehicles were using spaces in the shuttered structure daily.

The garage has been closed to the public since 2008, more than a year before the demolition of nearby Reunion Arena in November 2009.

The abandoned escalator inside the parking garage that once served Reunion Arena in downtown Dallas. (WFAA)

The city still owns the four-story garage at 501 Memorial Drive, sandwiched between the Houston Street and Jefferson Boulevard viaducts.

The top floor has several shattered windows with glass lying in parking spaces. There is plenty of graffiti and a broken escalator easily accessible to anyone.

“It looks like a low-rent horror movie,” said Dallas City Council member Philip Kingston, who found the conditions to be unacceptable.

Hundreds of motorists have been using the abandoned Reunion Arena garage for free parking. (WFAA)

There are concrete barricades blocking some entrances to the garage, but WFAA found some entrances open on both viaducts on Tuesday, as well as a ramp leading to the roof.

City spokeswoman Sana Syed said no one should be inside the abandoned parking structure, but we found dozens of vehicles parked there on Tuesday.

A woman told us she works for the city-owned Omni Dallas Hotel, and was told to park there by her employer.

Ethan Spears said he works two jobs for employers in both the Omni and the Hyatt Regency hotels, and parks in the garage every day.

Syed said the city did permit Omni employees to park on the roof of the garage while the hotel built an underground parking facility.

“That project wrapped up months ago, so we’re telling them now no one should be in there," Sayed said. "If it continues, we’ll boot their vehicle.”

While the Reunion Arena garage was closed years ago, hundreds &nbsp;of motorists are still using parts of it for free parking. (WFAA)

Spears said he and several other downtown employees count on free parking in close proximity to their jobs.

Syed said the city continues to spend approximately $100,000 annually maintaining the garage structure. That cost includes $72,000 for fire suppression, maintenance and repair, and $28,000 for electricity.

Syed said the city won’t make any moves on the property until it has a better feel for where potential high-speed rail routes will run through the southwestern part of downtown.