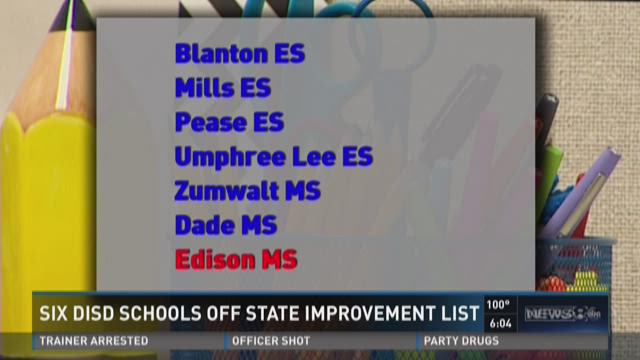 The Accelerating Campus Excellence (ACE) initiative was started in 2015 to recruit the highest rated teachers in the district to teach in seven struggling schools.

DISD said Tuesday based on a review of raw data from STAAR tests, it projects six of the ACE campuses to receive a "met standard" rating when the Texas Education Agency releases 2016 accountability reports to the public on August 15.

"School districts around the state will receive the report on Friday," TEA spokesperson Lauren Callahan said. "Any district that tells you one way or another before then is guessing."

The ACE program focuses on providing financial incentive to top principals and teachers to relocate to some of the lowest performing schools in the district.

The program started at Blanton, Pease, Mills and Umphree Lee Elementary - along with Zumwalt, Dade and Edison Middle School.

DISD says all but Edison Middle School, in west Dallas, are expected to come off the "improvement required" designation.

“All children have a right to come to a school where they are safe," Washington said.

Dade struggled with multiple fights on campus during the 2014-15 school year and cycled through three building principals under former superintendent Mike Miles.

Karen Rosales is going into eighth grade at Dade when school starts in just under two weeks.

She says the difference between her sixth and seventh grade experience at Dade was noticeable.

"There were a lot of drama and a lot of fights in sixth grade," Rosales recalled Tuesday. "Seventh grade was much better because the teachers were there to tell you what’s going on, what to do and what not to do and what’s better for you.”