Dallas Mayor Mike Rawlings announced at City Hall Tuesday he wants to form a task force to discuss the fate of the monuments. 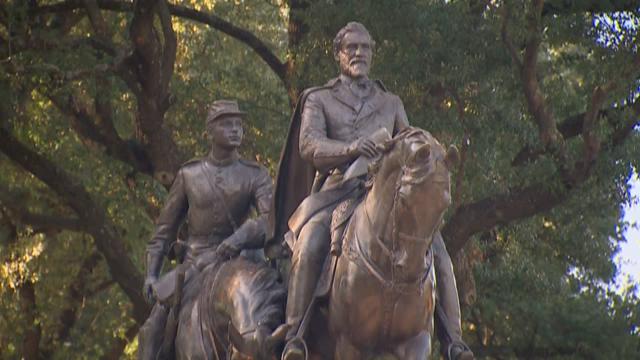 It may have sparked from debate over removing Confederate statues, but the hate in Charlottesville, Virginia, was shared.

"What this weekend shows is it's not over," said attorney Brian Lidji.

Lidji is Jewish, born and raised in Dallas, and watched as men in Virginia last weekend waved flags that flew when Nazis worked to eliminate his race. WFAA spoke at the city's Holocaust Museum and Center for Education and Tolerance, where he serves on the board, about perspective.

"Lee Park was a very fun park to go to when I was growing up," he said. "I never associated it with anything ugly, but if one day I went there, and there was a statue of Adolf Hitler, I would say a picnic wouldn't be quite as much fun or relaxing."

It is a common history of persecution that helps Lidji to see what Confederate statues and school names mean to ancestors of slaves. And in Dallas, the question looms of what to do with them.

"It's easy to jump on the bandwagon and say tear them down," said Mayor Mike Rawlings Tuesday afternoon.
"But I hesitate, and I do that because I realize that the City of Dallas is better is stronger when we are united."

Mayor Rawlings announced at City Hall Tuesday he wants to form a task force to discuss the fate of the monuments. He asked the Truth, Racial Healing and Transformation initiative and Dallas' Holocaust Museum to advise it. Here's what Lidji thinks it can offer.

"Empathy…you know, a little understanding about how it feels on the other side," he said.

Many say that will be needed through what remains an emotional debate.