Four years ago, five Dallas officers died when a man hijacked a protest against police brutality and began shooting at anyone in uniform. 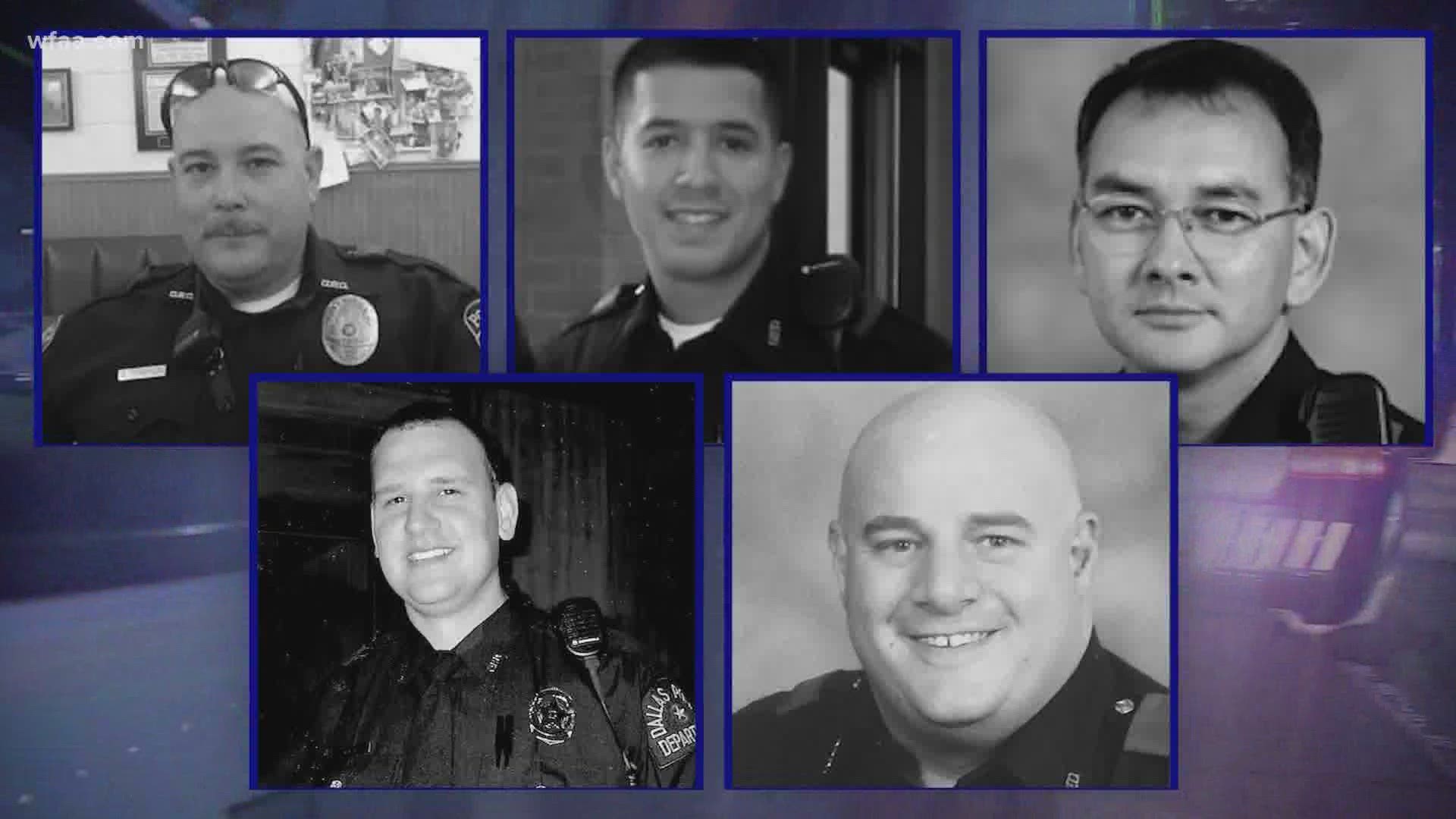 DALLAS — As marchers took to the streets of Dallas most every day of June, police were by their side.

It wasn’t always without tension, but police left every protest alive.

In July of that year, videos of two separate incidents – the deaths of Philando Castile in Minnesota and Alton Sterling in Louisana – had sparked anger and led to protests against police brutality across the country.

On July 7, 2016, marchers took to the streets of downtown Dallas, rallying against the killings of black men by white officers across America.

The march was peaceful until a 25-year-old man hijacked it, aiming his anger and guns at local police.

“I remember how the information came out. We have an officer down. Then you hear another officer is down,” recalled Sgt. Sheldon Smith, president of the Dallas chapter of the National Black Police Association.  “Then you start hearing names - names of people you know.“

Sgt. Ivan Gunter had been working right beside Ahrens, Krol and Zamarippa. He was their supervisor.

“All of them were unique. They had incredible skill sets,” he said. “Overall, they loved this community, and not just the city, the entire community. They brought that to everything they did.”

In the days following the ambush, Dallas united in grief and gratitude for those who are brave enough to wear the badge.

But in May of this year, yet another video reminded America that some who wear the badge shouldn’t.

Marchers took to the streets in Dallas, and the same officers who lost five brothers four years ago did their duty protecting the protesters.

And they did it without animosity or anger.

“A lot of people might think we are against people protesting, but it’s the exact opposite,” said Smith. “We will protect you as you protest, even if it’s against us.”

In years past, the city of Dallas has marked the July 7 anniversary with a public memorial. But because of the COVID-19 pandemic, the Dallas Police Department held a virtual private ceremony on Friday morning.

Gunter said he leaned on his faith to find forgiveness for what happened to his colleagues, knowing it’s not the peaceful participants’ fault.

RELATED: 'Everybody Love Everybody': Man's mission after July 7th ambush

Senior Corporal Terrance Hopkins, president of the Black Police Association of Greater Dallas, is in charge of tactical planning for special events in Dallas – like protests and presidential visits.

Dallas police officers hug on the night of July 7, 2016, when five of their brothers were killed in the line of duty.

He admits he hasn’t fully dealt with what happened four years ago.

But he does understand the Black Lives Matter movement.

“When they say Black Lives Matter, it doesn’t mean for you to come back and say, ‘Well white lives matter too, and blue lives.’ It’s not a competition.” he said.

“This is where we have to sit down as human beings and adults and have empathy.”

Credit: Eric Alvarez
Protesters make their way through downtown Dallas on May 30, 2020. Around 700 people gathered in response to the death of George Floyd.

Smith said the Black Lives Matter movement now has the attention of every police officer and every community across the country.

“People are hearing what the African American community has gone through for many years, and I think the policing issue is just one part of it,” he said.

“I’ve been black all my life. I was black before I was a police officer,” he added. “The key to becoming one nation is we have to communicate with each other and respect each other’s differences.”

But still, they serve — every day, even a day as painful as this.