Customers given umbrellas, water as they wait for over an hour outside DPS mega center in triple-digit heat

One customer told WFAA that she had been at the center for four hours and had yet to renew her license. 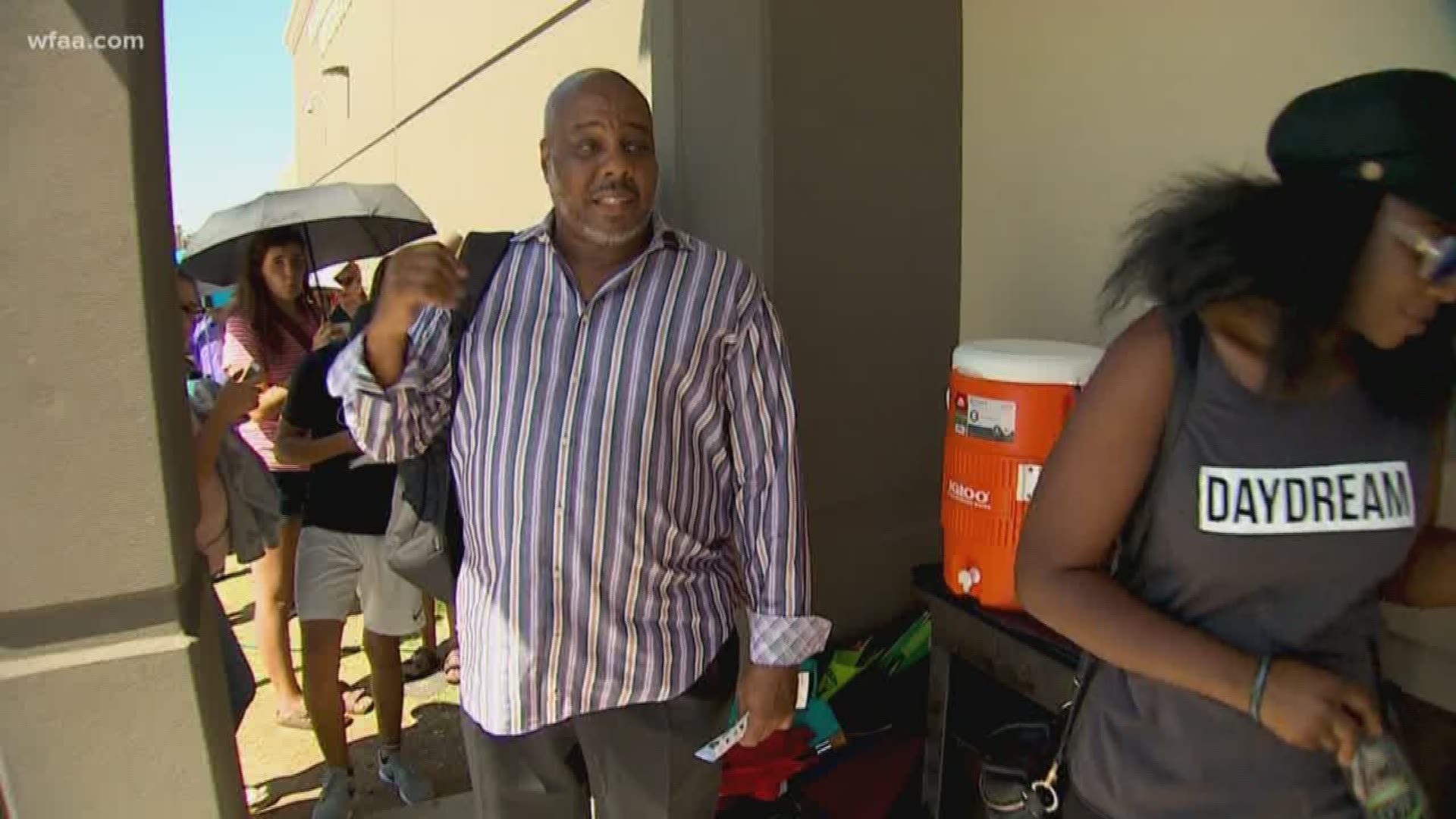 CARROLLTON, Texas — North Texans who didn't get an early start at the driver license mega-center in Carrollton on Monday experienced a rude awakening when they had to wait outside in the triple-digit heat because the center was at capacity.

The temperature reached as high as 101 degrees in the afternoon.

Complimentary umbrellas and water were at the ready.

It's not the first time the mega-center has seen issues like this, last summer the Department of Public Safety told the Dallas Morning News that it frequently dealt with overcrowding and lines wrapping around the building on Mondays and Fridays.

Last Friday, WFAA was sent photos from a customer waiting outside who was at the back of the line.

The mega center in Carrollton has one of the worst average wait times in Texas.

In fact, WFAA learned in May that seven out of the 10 worst combined-wait times are in North Texas.

State guidelines say a customer should wait no longer than 30 minutes for renewal, and 45 minutes for a new license.

Lanna Wood, from Corinth, only needed to renew her license. She said that she stood outside for around an hour before she was let inside and given a ticket.

When we talked, Wood said she had been there for four hours and hadn't been seen yet.

"Everyone has just been miserable and has been complaining about it," Wood said. "I've been here for four hours and probably still have another hour to go.

The Department of Public Safety admitted to lawmakers during the last legislative session that it was understaffed.

Governor Greg Abbott even signed a bill into law that would extend the expiration term of Texas licenses from 6 years to 8 years in hopes of alleviating lines.

But Zane Burks told WFAA that more needed to be done. He waited outside for over an hour and a half to get a Texas license after recently moving into the state.

"Luckily, it was only 88 degrees then," Burks said. "There were people that heard there was a 4-hour wait inside and they just left."

An official kept customers in the loop during the entire time WFAA was there, however.

Multiple times he came outside and let people know that they were taking a risk by standing outside because it was likely they may not be seen.

Still, lawmakers have argued that wait times shouldn't be this long.

In fact, mega centers like this debuted in 2012 to streamline the process.

But with wait times still being an apparent issue after the session, one might question if more still needs to be done.

A study was also approved by lawmakers during the session that would look into if the Department of Motor Vehicles would be more properly fit to take over the issuing of licenses from DPS.

That study must be done by September 2020.