Well-known vendors from the Texas State Fair will be at the Tate Farm in Rockwall on Saturday from 2-8 p.m. 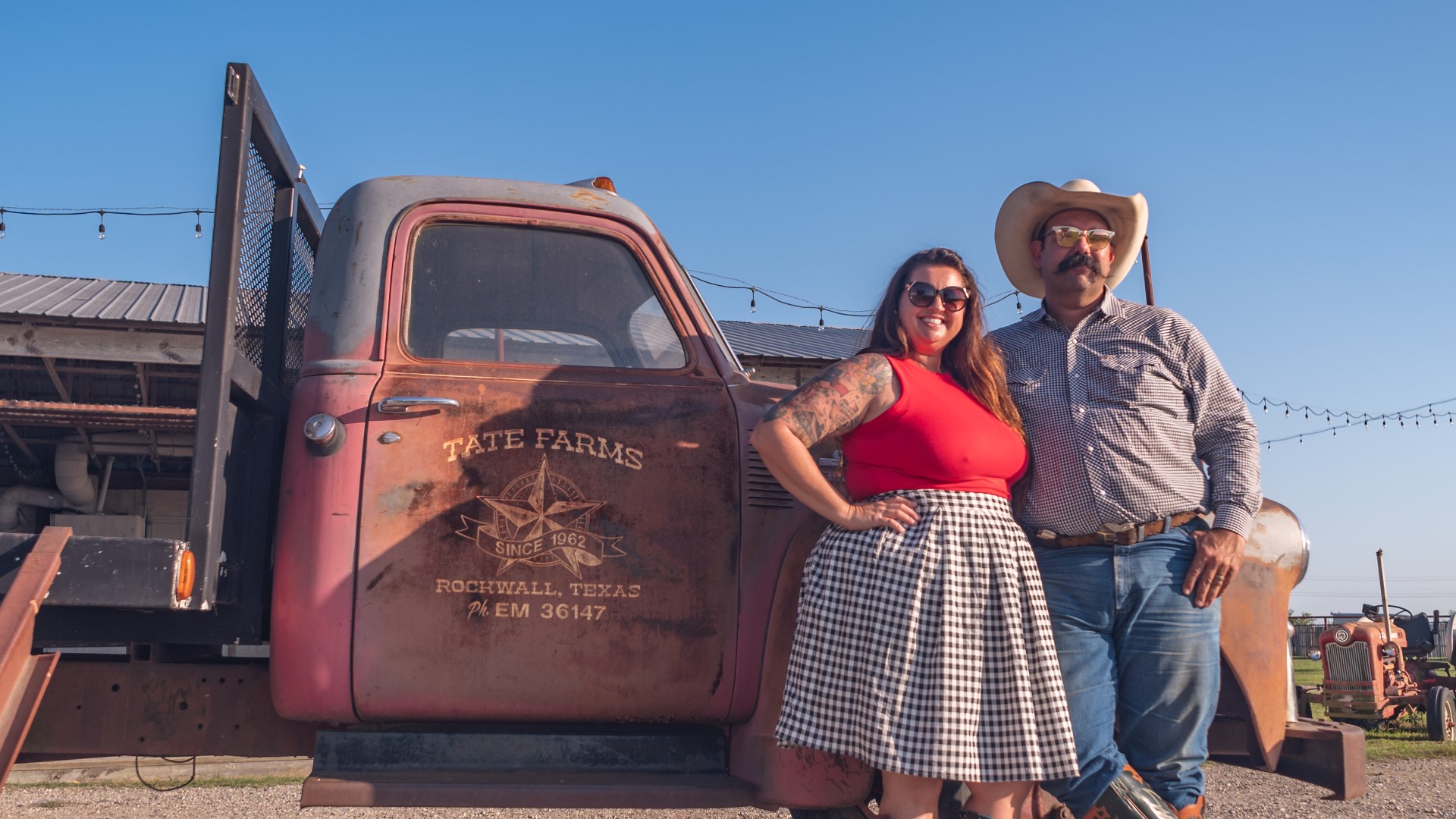 ROCKWALL, Texas — A Rockwall couple who made headlines nationwide in 2017 for having a State Fair of Texas themed wedding, is opening up their farm to well-known vendors from the fair this weekend.

Their intent is to give vendors a chance to make up some money they’ll lose this year, all while offering an opportunity for folks to get their "fair fix" since it has been canceled due to the coronavirus pandemic.

The only thing the state fair is offering this year is a drive-thru opportunity.

The Big Tex Fair Food Drive-Thru opened Friday, which allows fair lovers to get food from some of their favorite vendors and a photo with Big Tex. The lovable mascot is now standing tall and wearing a mask.

RELATED: No State Fair? No problem. Get a taste every weekend through Oct. 18

You can even win a midway prize by playing a game from your car.

It’s a solid alternative, but still not the same if you ask Melissa Tate.

Tate is a State Fair of Texas super-fan. Every year, she attends all 24 days of the storied event.

She even has a tattoo of Big Tex on her arm.

“My birthday falls during the fair season,” Tate said. “I just love the tradition, I love to see Big Tex go up, but I also love to see the same vendors every year. We do everything. We go to the museums, the exhibits, the car show, we’re doing so much more than just the rides and the food.”

Her husband Evan enjoys the fair just as much as she does. He proposed to her underneath Big Tex, and in 2017 the couple had a state fair themed wedding on Evan’s family farm in Rockwall.

The event had fair food (even Fletcher’s Corny Dogs), a Ferris wheel, and games too.

“We built the Midway out there,” said Evan Tate. “We did all the lights, Melissa made the bunting, and we did everything on our own.”

The wedding was dubbed the "Tate Fair of Texas."

Tate laughingly chimed in, saying that she made her husband aware of her fair love when they were dating.

“When we first met and started dating, I was like, OK, we met in July and state fair season is six weeks away. I just want you to know I go every day, are you OK with that?” Tate said with a chuckle.

Credit: www.nbarrettphotography.com
Tate and her husband Evan share an embrace on their wedding day.

So with the fair being canceled, Tate is obviously crushed but understands the reason the event couldn't go on this year.

“It was super sad,” Tate said. “The loss of those traditions was hard for me. But the first people I thought of were the vendors. This is their bread and butter. This is how they make their money. So what are those people going to do?”

So Tate had a wild idea, why not do what she and her husband did in 2017 but with masks and social distancing?

“My thing was, we have space. We can do this here,” Tate said.

“With a smaller scale situation, we thought we can pull this off,” Evan Tate said.

So, on Saturday from 2 p.m. to 8 p.m. for one time only, the Tate’s will host a number of fair vendors on their farm for "Tate Fair of Texas" part 2.

Credit: Chance Horner
An aerial photo of the Tate Farm.

Fletcher’s Corny Dogs will be there, Stiffler’s Mom’s Cookie Factory is scheduled to show up, and Eddie Deen BBQ will provide all the meaty goods, including turkey legs.

No games or rides will be at the farm due to COVID concerns, but Rockwall’s 4H and Youth will be showing livestock, and there will be some vendors selling non-food items too.

A few car dealerships from the area will have some fresh wheels on-site to simulate the fair’s annual car show.

A more than 100-year-old chapel on the farm has also been set up as a “Lives Lost to Racial Injustice" exhibit.

The exhibit will stay up after the fair event is done.

Overall, Tate just wants to help out those who won’t get the opening weekend they deserver this year.

“Everybody is going to miss out on everything this year,” Evan Tate said. “We’re going to try to have a little bit of that here.”

Masks are required for the event unless you’re eating. It is open to the public.

For tickets go here. Tate told WFAA she and her husband are charging $20 per car.

Drive-up admission is welcomed, but scheduling a time to visit by buying a ticket online is preferred to avoid crowding.