Courtney Runyon, 33, has continued to make and share videos, documenting her illness with humor and grace. 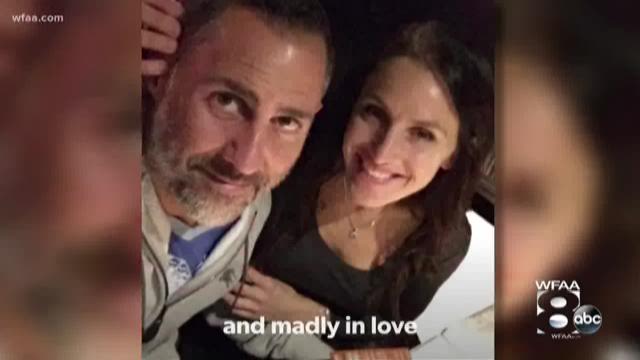 In a house on Blessing Way, a young woman is counting all of hers.

Every movement, every stretch, every embrace is a blessing, for just weeks ago, Courtney Runyon was able to do none of it.

"You never think something's going to happen to you, until it does," Runyon said.

Her social media videos chronicle how it all happened. Last winter, the 33-year-old Plano native was living in Las Vegas when she started noticing some tingling in her hands and feet, and some clumsiness-- or so she thought.

"I had on these high heels," she recalled. "I was just like—something's not right with my leg. My ankle's rolling and my calves not working."

The numbness started to spread over the coming months.

"Every single day, there was something I could do the day before that I could no longer do," Runyon said. "I couldn't brush my teeth. I couldn't feed myself."

Runyon documented and shared videos of her mysterious changes with humor and grace, but the changes were admittedly scary, as doctors couldn't pinpoint why they were happening.

"They say that God doesn't give you anything you can't handle," Runyon recorded herself saying in a Facebook video in 2017. "Well, I think he got me confused with someone else."

She eventually lost all movement in her arms, hands, legs and feet.

"It was scary to watch life slip through your hands and not know what's happening," she told WFAA through tears.

But she kept sharing videos of her journey online. Feedback from friends and family lifted her up, she said, as she fought through the fear.

And when Runyon's diagnosis finally came, nine months after her symptoms started, it was something she'd never even heard of.

"She has chronic inflammatory demyelinating polyneuropathy, which you call CIDP," said Dr. Lauren Phillips, a neurologist at UT Southwestern.

With this news, Runyon moved to McKinney to be with her family and started receiving treatment under the care of Dr. Phillips.

"It's not entirely clear in her case what caused this to happen, but once the process is started, it tends to continue until you intervene," Dr. Phillips said.

The doctor said Runyon's case is one of the most severe she's ever seen in her entire career. But the illness is treatable, and treatment is working.

Days before Christmas, Runyon got the first sign she was recovering: her toe started to move.

"It's fun," she told us. "I'm like a little baby, like—lay down and kind of wiggle things around."

Physical therapy, plasma replacement and, the doctor said, Runyon's positive attitude are all playing a role in slowly bringing her movement back. Over time, doctors hope she'll return to as close to normal as possible.

"You would think there would be so many tears, but there's definitely way more laughs than tears," said Runyon's sister, Carley Cagle. Cagle, along with her parents, is helping her sister with her therapy.

Through it all, Runyon never stopped sharing. She just had to adapt how she did it. One of the videos she posted, which was viewed 75,000 times, she made using her nose.

Click here for more on Runyon's efforts to recover.