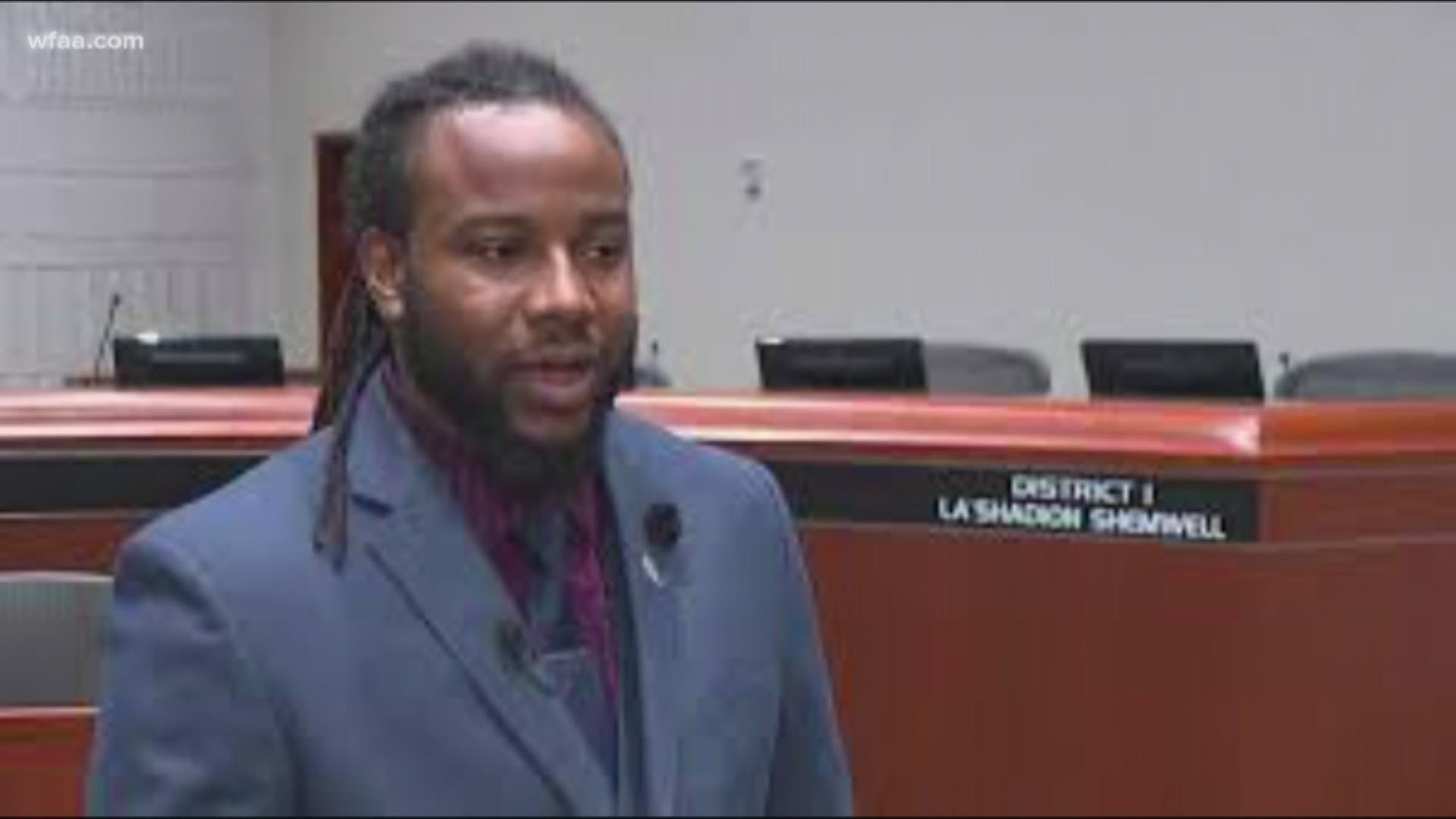 McKINNEY, Texas – A McKinney councilman faces a third-degree felony charge of family violence after a woman accused him of assaulting her multiple times.

LaShadion Shemwell, a councilman representing McKinney’s District 1, was arraigned Thursday morning and his bond has been set at $21,500.

Court documents reveal that a woman who was in a "dating relationship" with Shemwell had told detectives about three separate incidents in which he assaulted her. The first assault allegedly happened on Feb. 13, when the victim claims she and Shemwell were arguing over text messages found on her phone from another man.

The documents detail the alleged assault:

"LaShadion got on top of (victim) as she laid on her back, and straddled her torso area and struck her in the mouth one time and continued to put his hands over her mouth so she couldn't scream," one document reads.

#NEW Court documents reveal that a woman who was in "dating relationship" with LaShadion Shemwell alleges assault on 3 seperate occasions this year. Docs reveal the assaults are "Continous Violence Against Family" and constitute a 3rd degree Felony. @wfaa pic.twitter.com/QWIUsjyM7v

Another incident also details a fight that happened after a birthday party. The woman claims she and Shemwell had physically assaulted each other beginning in the car and later in the home. A member with the housing authority came to the residence because of a complaint of a disturbance.

The alleged assault resulted in injuries to both people.

And in a recent November incident, documents reveal the couple got into a physical altercation in which Shemwell wrestled away car keys from the woman. During that altercation, the woman broke three fingernails and injured her middle finger on her right hand.

On two occasions in the affidavit, the victim claims she did not contact police because "she loves LaShadion and didn't want that kind of attention."

WFAA reached out to Shemwell several times and our calls have not been returned. But the following post was seen on LaShadion Shemwell's public Facebook page:

"This is one of my many many life experiences that have been the impetus for my desire to fight for criminal justice reform and to be the biggest advocate for equitable legislation for impoverished communities," the post reads in part.

"There will be some things that are said about me in the next few days. I challenge you to consider the sources. Prayers are much appreciated for my family more specifically my school age children who can read the hate-filled and biased things said about their father. Thank you in advance.

P.S. I’m not going anywhere. If you want my seat, run for it and beat me. Your bully tactics don’t work over here."

WFAA reached out to McKinney Mayor George Fuller, who replied with the following statement:

"I am aware of the charges alleged against Councilman Shemwell and I have full confidence in our police department and the legal process that will adjudicate these charges. Mr. Shemwell is entitled to due process and, until such time, I will not comment on the facts or persons involved. However, violence against the family is intolerable and anyone convicted of such a crime should be punished to the fullest extent of the law."

Earlier this year, Shemwell accused a McKinney police officer of racial profiling after he was pulled over and arrested for refusing to sign a speeding ticket. After seeing body camera footage of the arrest, he admitted he handled things poorly and later voted to censure himself.