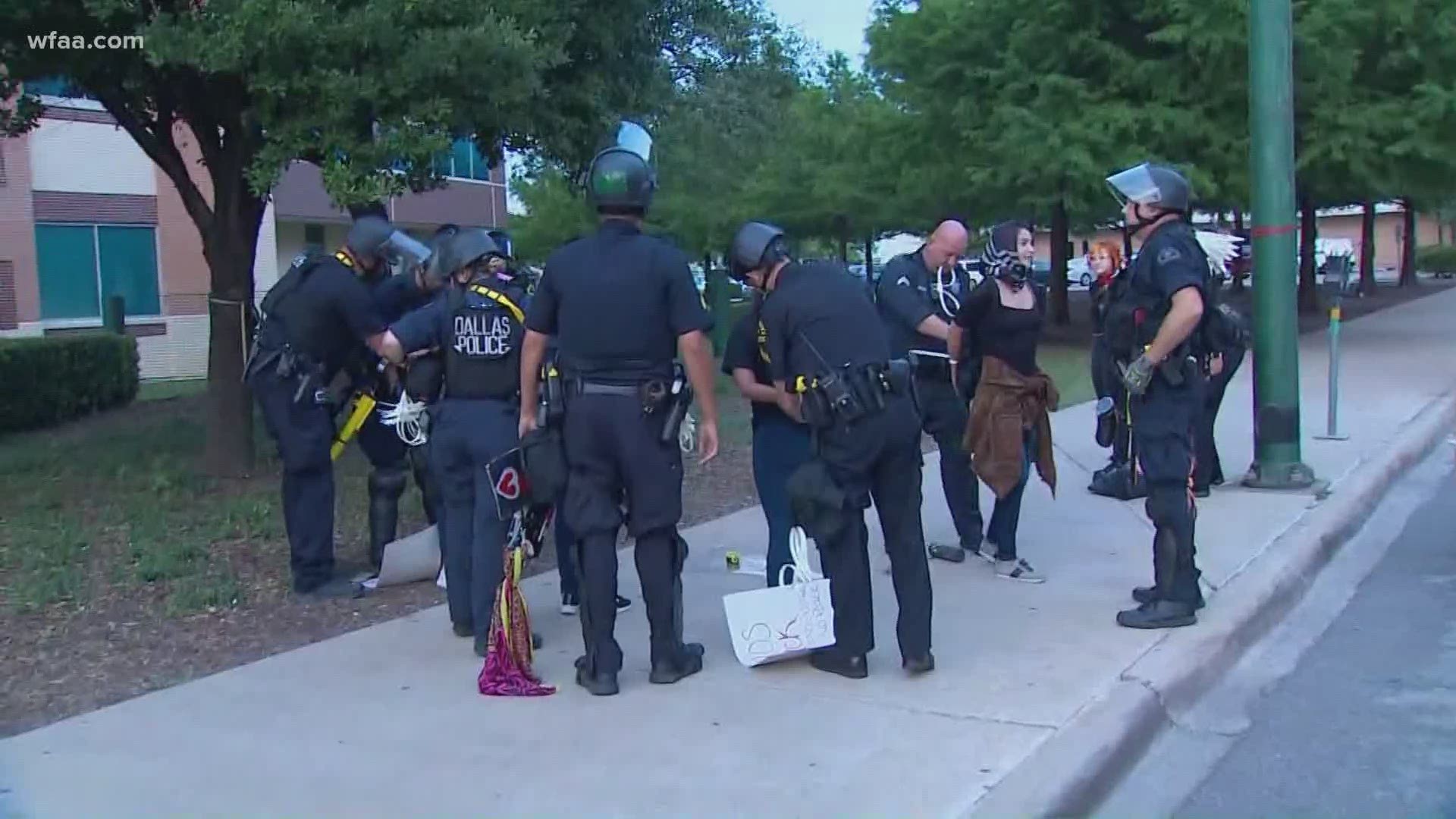 Dallas police Chief Reneé Hall has issued an updated general order with modifications regarding police protocol at protests and demonstrations within the city, as first reported by Central Track.

Officers will now be limited in their use of tear gas to deter or control the movement of peaceful demonstrators, according to an updated general order issued by the chief.

Additionally, PepperBall or foam kinetic impact projectiles will no longer be deployed into crowds, according to a news release sent Wednesday.

Protests took to the streets nationwide after the death of George Floyd, who was restrained by Minneapolis police officers on Memorial Day.

Civil rights attorneys filed a lawsuit against the City of Dallas on June 11 and asked for the temporary restraining order to stop police from using “less lethal” weapons that have injured multiple people.

The legal actions were filed in the name of two victims, 21-year-old Vincent Doyle and 27-year-old Tasia Williams.

The newly issued guidelines, however, do not apply to "criminal acts" such as burglary, vandalism, or violence against people and property including attacks on police officers.

"Tear gas may be available with approval of the Chief of Police or the Chief’s designee," officials said.

Under the updated procedures, direct contact hits with the PepperBall launcher system is justified if someone exhibits violent behavior that threatens the safety of themselves and/or others.

“Officers must be able to articulate the violent behavior and the perceived threat to self or others,” documents state.

The PepperBall System should not be used to intentionally target someone’s head, neck, face, eyes, and spine unless deadly force is justified. The updated procedures also state under no circumstances should the PepperBall system be applied after resistance has ceased.

"SWAT must continue to have reasonable and necessary tools in its continuum of force options," Hall said in a written statement, "but there will now be limits on their appropriate use. They can be used to control violence but not peaceful demonstrations."

The other updated order addresses the use of 40MM “Stinger” less-lethal launcher system which is often used for rubber bullets.

“Officers will notify a supervisor, if time allows, when there is an indication by comments of the call or officer’s prior knowledge of a location or individual, there may be a potential for conflict and use of the system," the order states.

The updated procedures follow similar protocols in which the system is justified to use in situations in which someone is being actively aggressive towards others.

Dallas police officials say Hall and her command staff are continuing to review videos and written reports collected from protests that occurred May 29 through June 1 in downtown Dallas.

Last month, Hall agreed to drop citations that were issued to protesters who violated the city’s curfew from May 31 through June 1.

After the announcement, Hall said she hopes dismissing the curfew charges will be a signal to the community.

"We have always and still value the right to protest, especially now," Hall said in a previous statement.

Humza Khan was one of 600 plus protesters detained on the Margaret Hunt Hill Bridge on June 1.

“I was nervous because I expected something to happen,” Khan said. “I remember looking back at the officers and I made eye contact with one holding one of those paintball guns and he shot me right in the face.”

“Every instance where I have been out and less lethal force has been used, it’s been instigated by PD,” Khan.

Khan, who helped during the protest as a medic, said it’s a good move to take away less lethal options from officers.

“I don’t think it’s necessary for you to have all of those tools when there are so many cases where you are irresponsible with those tools,” he said. “I think as a police officer you should be held to a higher standard than an average person and no one mentions de-escalation as part of that toolbox.”

But some officers are concerned. Sheldon Smith is the President of the National Black Police Officers Association, Dallas Chapter.

“If we take away less lethal during those types of situations then it only leaves us with our hands and our firearms,” Smith said. “The focus is on African American males being killed across the nation so if officers only have their hands and their weapons, how safe actually are they?”

“Of the course the option to retreat is there, but ultimately you’re going to have to come back and address that same issue,” he added. “When you have only those two options, then the chances of something happening that is not good is greater.”