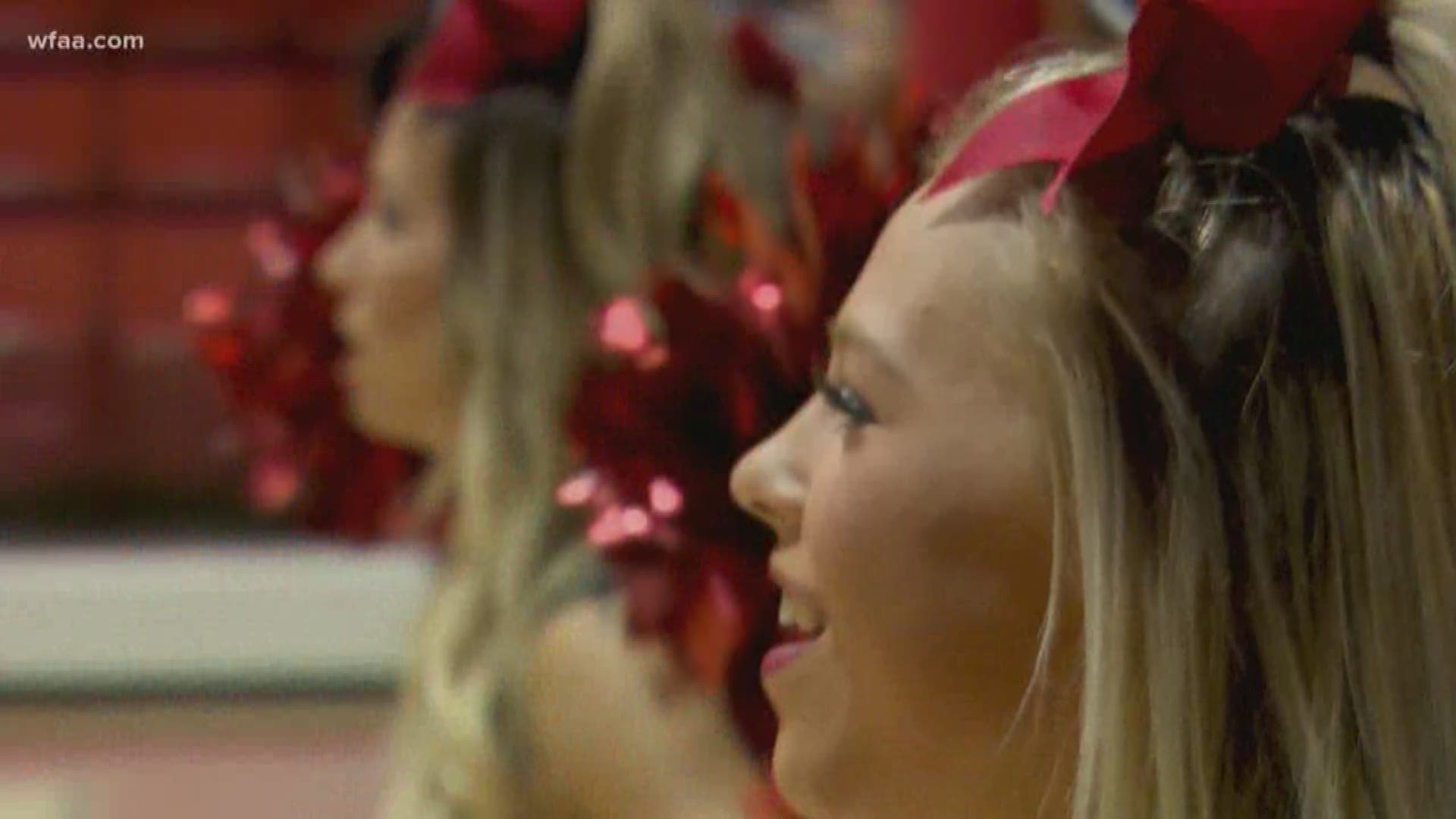 If you didn't know about Navarro College's cheer team, you better get familiar, because the whole world is learning their names.

On a Wednesday night in Corsicana, the cheerleaders were performing ahead of a basketball game. As they flipped and pumped up the crowd inside the gym, they were becoming Netflix's newest stars outside of it.

"I've watched it four times," she said. "I got to preview it early, but I get emotional every time."

Credit: WFAA
Navarro College Cheer Head Coach Monica Aldama sat down with WFAA on Jan. 8, 2020, to discuss the premiere of Netflix's new show 'Cheer.' The show follows her team's journey to be the best in the nation.

The film crew follows Aldama and her staff as they run the team through grueling practices to prepare to compete, showcasing the cheerleaders' athleticism.

But why did producers choose this team at this school in this small town? Navarro Cheer has won 14 national championships in the last 20 years.

The show follows their route to last year's competition and the lives behind the smiling faces in that pyramid.

Flyer Morgan Simianer and stunter Jerry Harris both binge-watched the show themselves when it came out.

"We both stayed up until 2 o'clock in the morning and watched the entire show all the way until 8 o'clock," Simianer said. "It was everything we could have wished for and more. It had so much emotion and so much meaning behind every single episode and every single second that it just as a whole was incredible."

So what does it feel like to be trending on Netflix now that the show has aired?

"It's insane, like, it hasn't hit me yet, it hasn't processed yet," Simainer said.

Credit: WFAA
Morgan Simianer (left) and Jerry Harris sat down with WFAA on Jan. 8, 2020, to discuss the premiere of their new show on Netflix, 'Cheer.' The show follows their paths as members of Navarro College's cheer team.

Both team members get very personal in the series.

Simianer's story deals with living in poverty. Harris shares the loss of his mother.

Both said that they had never imagined they would end up where they are today.

"I would never in a million years picture my life being where it is right now," Simianer said of her past.

But they both describe cheer as their north star through it all.

"It's awesome that we get to share what we get to share to the world," Harris said. "I feel like it's going to make everything else that we have lined up for us in life so much better and give us so many more opportunities that we never thought we could have with just being us."

And while they said it was hard for them to open up like that, they hope the show can help others find an outlet in cheerleading as well.

Credit: WFAA
Morgan Simianer (left) and Jerry Harris sat down with WFAA on Jan. 8, 2020, to discuss the premiere of their new show on Netflix, 'Cheer.' The show follows their paths as members of Navarro College's cheer team.

"Our stories are really deep and really from the heart, and at the end of the day, we just want to help the next person out," he said.

He specifically wants to reach the next generation with that message.

"My ideal viewer is a kid probably around 12, 13, 14 years old," Harris said. "And I hope that if they're struggling at this time, they use my story as motivation to keep them going through. Never give up."

Less than a week since it started streaming, "Cheer" has developed quite the following and had some great reviews. Both team members have received thousands of followers and messages since the show was released.

"The amount of love that we've gotten and positivity is out the roof," Simianer said.

"It's just so much love, and I love that I'm just soaking it all up right now," Harris said.

And now, the world knows all about the hard work put in at the gym at a small school in North Texas.

You can watch the series on Netflix here.