Gov. Newsom said the mail-in ballots will not be a substitute for physical voting locations, which will still be offered. 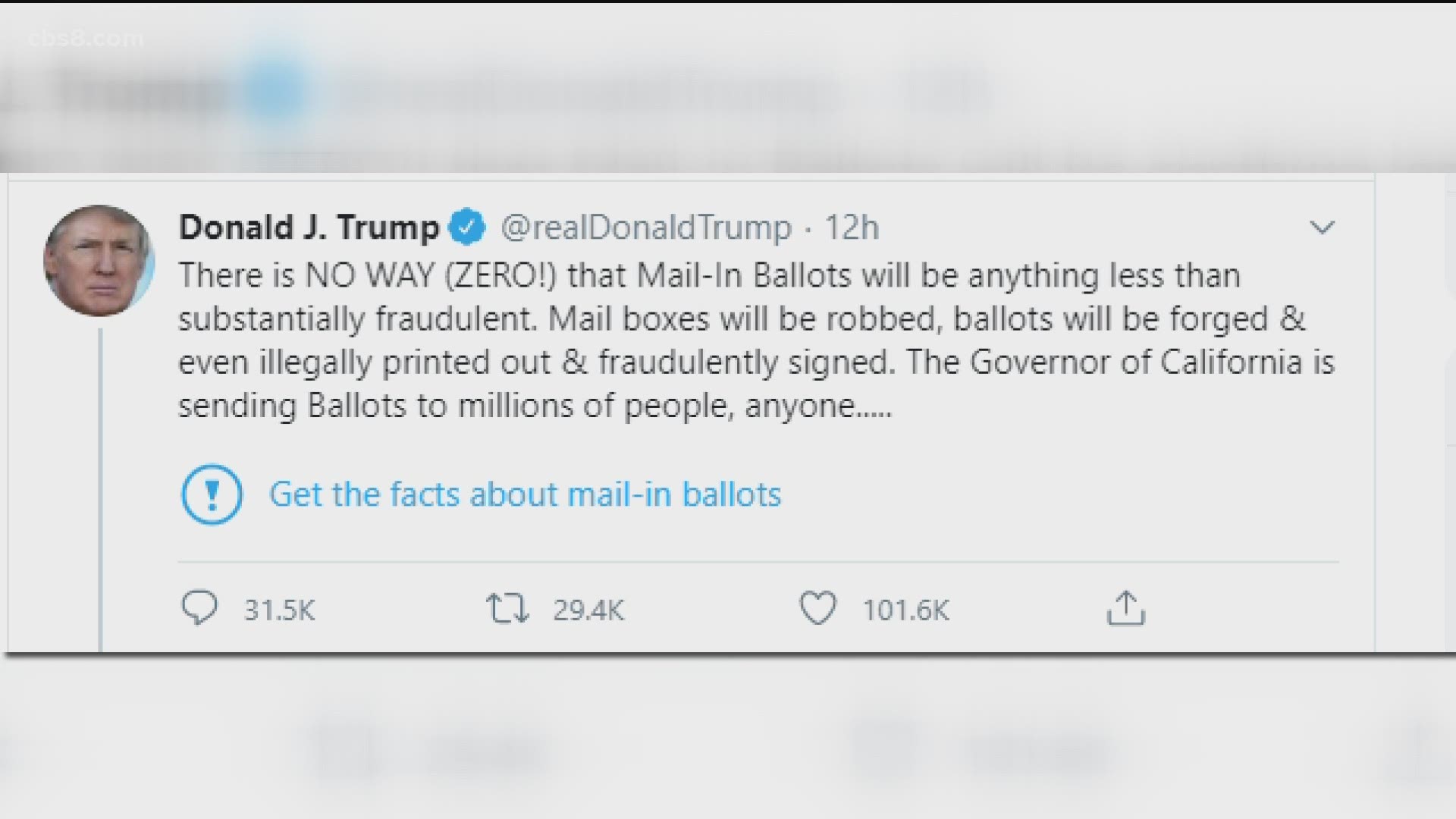 CALIFORNIA, USA — Gov. Gavin Newsom has been sued by the Republican National Committee and two other party organizations for his executive order calling for every registered voter in the state to receive a mail-in ballot for the November election.

According to the suit, the order will result in ballots going to voters with invalid registrations, voters who have moved and voters who have died. The suit also criticizes the practice of "ballot harvesting," in which campaign workers, union members, political activists, paid personnel, volunteers or others go to voters' homes to collect ballots to turn them in to election officials.

"Ballot harvesting gives third parties who may be completely unknown to both the voter and election officials the opportunity to potentially tamper with absentee ballots," by pressuring them into giving them blank ballots, casting their votes a certain way, or "when a voter has voted for the `wrong' candidate, the harvester may surreptitiously change the vote, include additional votes to void the ballot, or simply dispose of the ballot rather than returning it," according to the suit.

President Trump has also weighed in on the debate.

"Mai-in ballots are very dangerous," he said. "There is tremendous fraud involved  and tremendous illegality!"

On Twitter Tuesday, the President posted: "The Governor of California is sending Ballots to millions of people ....living in the state, no matter who they are or how they got there, will get one. That will be followed up with professionals telling all of these people, many of whom have never even thought of voting before, how, and for whom, to vote. This will be a Rigged Election. No way!”

In an unprecedented move, Twitter fact-checked the President, directing users to a link to information showing his claims on mail-ballot fraud as unsubstantiated.

Trump  later blasted back, posting that "Twitter is now interfering in the 2020 presidential election."

Jessica Millan Patterson, chairwoman of the California Republican Party, one of the three parties to the suit along with the National Republican Congressional Committee and Republican National Committee, said "California's election system is already burdened with serious issues."

"The disastrous Motor Voter program arbitrarily changed voter registration for thousands, casting doubt on the integrity and accuracy of our voter rolls," Millan Patterson said. "Using this pandemic in a unilateral power grab to change our election laws with an executive order will further put the integrity of our elections into question."

Secretary of State Alex Padilla was also named as a defendant in the suit.

Newsom issued the order May 8, saying that providing all voters with a mail-in ballot will give them "the choice not to feel like they have to go into a concentrated, dense environment where their health may be at risk" due to the coronavirus pandemic.

Newsom said the mail-in ballots will not be a substitute for physical voting locations, which will still be offered. He said the executive order also calls for the development of a plan by the end of the month on the locations of voting sites for the election.

The Los Angeles County Board of Supervisors voted unanimously April 28 to send vote-by-mail ballots to every voter registered for the November general election, citing concerns about coronavirus-related social distancing.