The alleged attack required a trip to the hospital and some stitches. 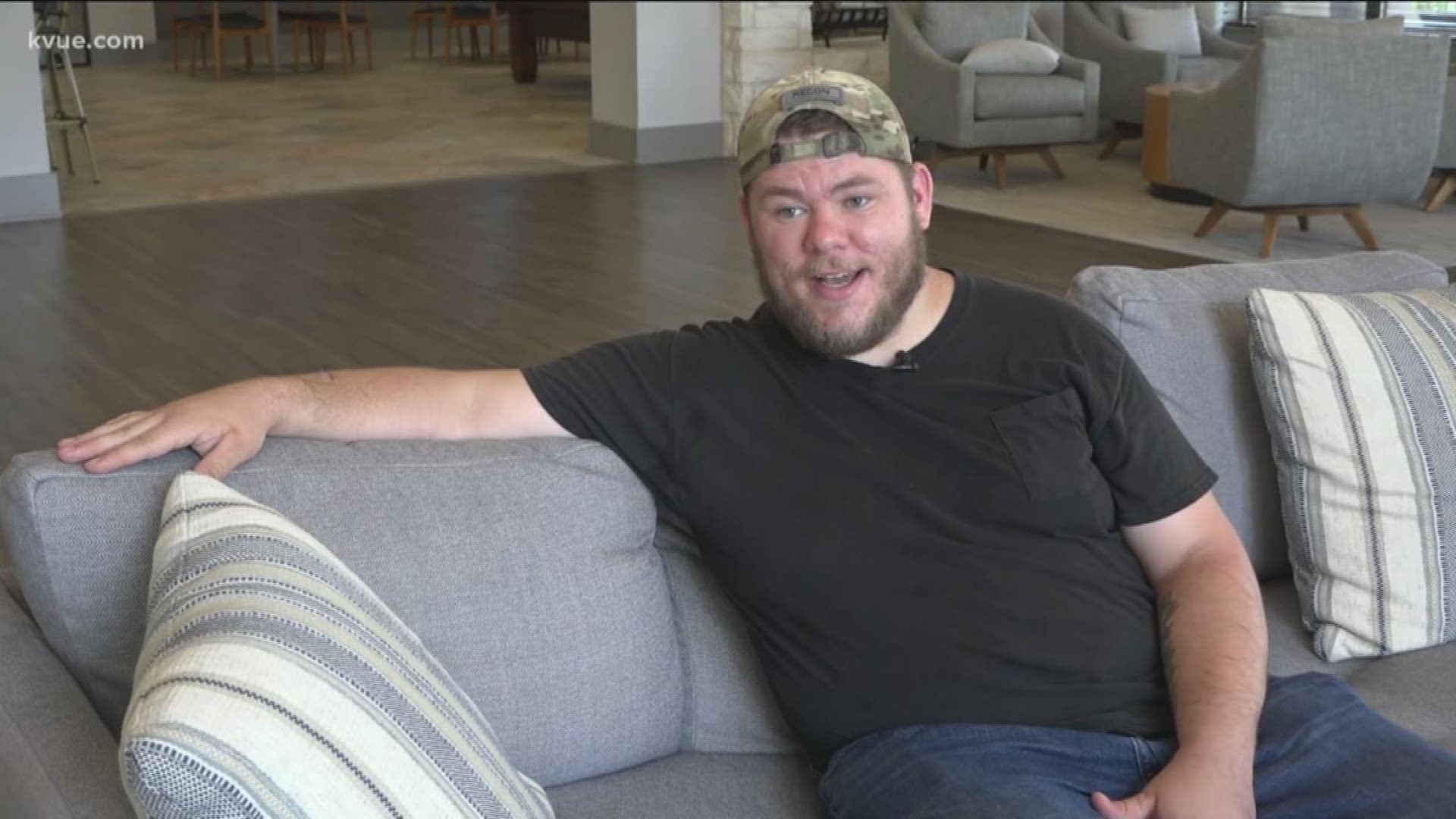 AUSTIN, Texas — An Austin veteran was left with cuts and stitches after he said a homeless man attacked him inside a gated South Austin apartment complex.

The alleged attack happened at the Ethos Apartments near the south Interstate Highway 35 Frontage Road about 10:30 p.m. Monday.

Ian Hooper told KVUE he was returning to his apartment after walking his dogs when he noticed someone stumbling near bushes that led to one of the apartment complex's trails.

"I thought he was maybe a drunk kid or something like that and needed help," Hooper said. "As soon as I got within arms' length of him, he turned around and just started swinging at me."

Hooper said the two got into a scuffle before he realized the man was armed.

"I was able to get him locked up. That's when I realized he had a knife and also realized I was covered in blood," he said.

Hooper managed to push the man off of him before he ran into the woods.

Then, his focus turned to his safety and the cuts from the knife on his arms. He said his training with tourniquets in the Army as a specialist came in handy.

"I had a tourniquet in my car, so I grabbed my tourniquet and threw it on my arm and called 911," Hooper said.

Medics took Hooper to the hospital, where doctors treated his wounds and gave him stitches for at least one of his cuts, he said.

Austin police officers tried to find his alleged attacker, but they came up empty. As of Wednesday afternoon, police had not yet made any arrests, an APD spokesperson told KVUE.

The apartment complex management sent residents a letter on Tuesday, describing the alleged attacked and an increase in homelessness activity.

"As some of you may have noticed, there was visible police presence at our community last night. We were informed this morning that around 10:30 p.m., one of our residents approached a homeless male who seemed to be in distress and was attacked. The resident suffered cuts to both of his arms, one cut requiring stitches. We are very relieved that the resident is going to be OK; however, we need to make everyone aware of the situation that is occurring not only at Ethos, but throughout the city of Austin.

A recent change in policy regarding homelessness in our city has created an abundance of homelessness activity in and around our community and the city as a whole. While the new policies do not affect private property, they have provided the homeless population with more freedoms within the city and may be misleading them to believe that these freedoms are granted anywhere they choose. We would like for each of you to reach out to our district city council office to voice concerns over these new policies, which are affecting the lifestyle we all appreciate and love about Ethos."

Emily Knaub, who's lived at the apartment complex for about six months, said she was shocked to learn about what happened.

"I was really upset that it happened just in general, but then I was also really afraid for the person that got attacked," Knaub said. "This is the first time this has happened here, and it's nerve-wracking to know that this could happen more to more people."

Knaub said she understands why anyone would want to seek shelter in a gated community like hers.

"It's a nicer area, so they wouldn't have to worry about maybe other types of threats and things like that," she said. "It makes sense why he came onto the property. But it's just sad he felt he had the need to come onto the property to find a place to sleep."

But with the recent relaxation of the homeless ordinances in Austin, both she and Hooper believe more can be done to keep the community – and the homeless population – safe from violence.

"We can help them find a shelter, but what else can we do," Knaub said. "You've pushed this onto us when we don't have enough resources, unlike you as a city government that do, and you have this opportunity to do great good, and we want you to do great good, but we need to keep that dialogue open."

Ken Casaday, the president of the Austin Police Association, told KVUE some officers have been confused about how to enforce the changes, which no longer makes it a crime to sit, lie or camp in public, unless someone is blocking a pathway or they are on private property.

"You take five different officers and they could look at an incident, and three of them could say, 'That's hazardous,' and two others could say, 'OK, that's not hazardous,'" Casaday said. "There's no definition of the changes that have been made."

Casaday also said he thinks the behavior in some of Austin's homeless population has changed since the ordinance changes.

"I think some of the individuals have become more aggressive, but I've also talked to several homeless people down at the ARCH that absolutely disagree with the change in ordinance," he said" "[They've said], 'How can you live in a functional society without laws and rules on what people can do and not do?'"

Hooper is just thankful he was attacked and not someone else.

"I'm not happy that it happened, but if it was anybody, I would have rather it been me since I know how to handle that situation more," he said. "It could've been someone else. It could've been a kid or, God forbid, my wife taking the dogs out or something like that."

Hooper provided KVUE the following description of the alleged attacker:

If you have any information about the attack, call Austin police.

Tropical system strengthening in the Gulf, expected to become hurricane