Austin's city council approved the change in a 9-1 decision Thursday. 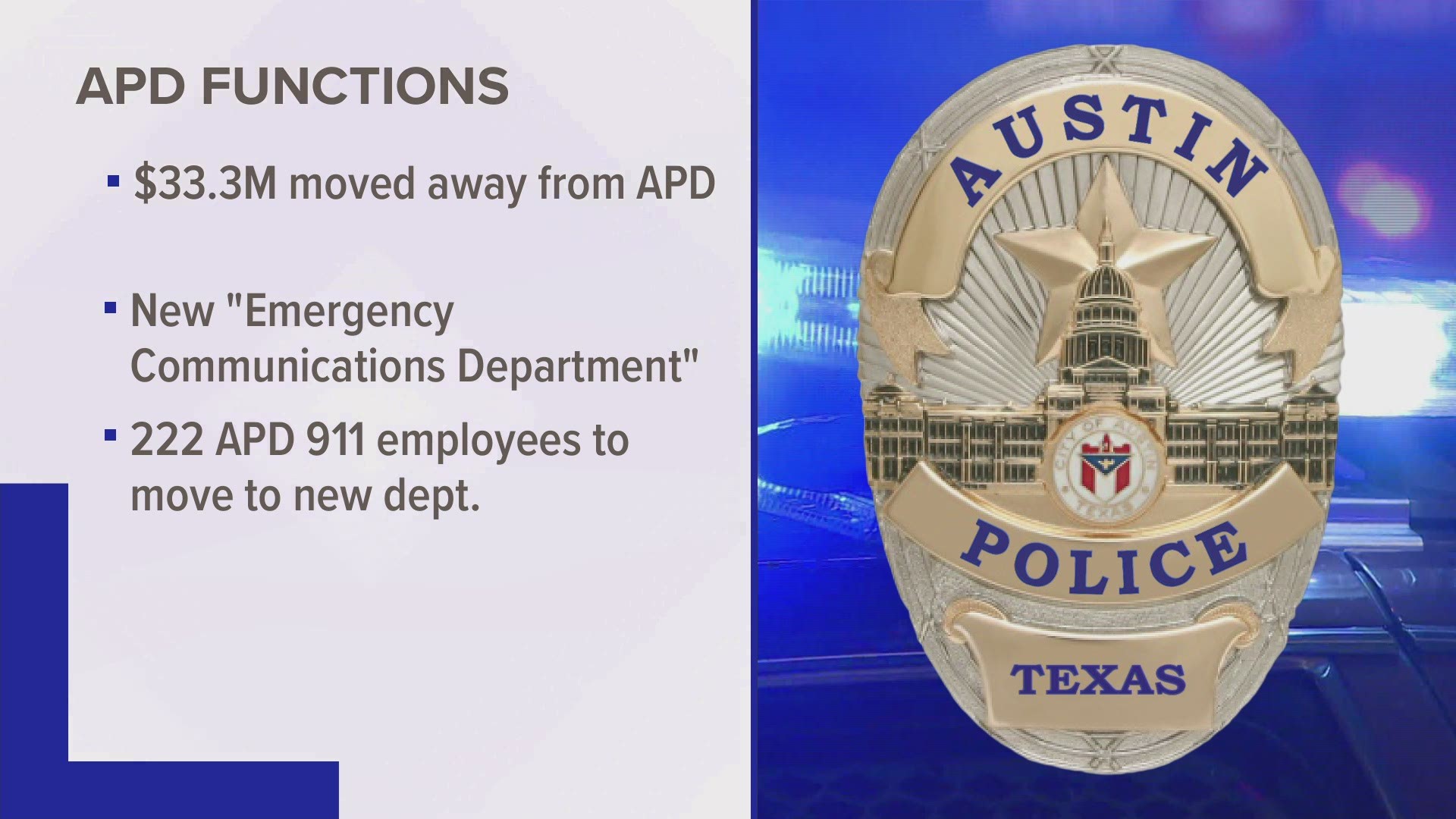 AUSTIN, Texas — The Austin City Council is transferring hundreds of jobs out of the Austin Police Department after a vote Thursday. The council approved an ordinance that creates a new Emergency Communications Department, which is part of the city council's plan to reallocate about a third of the APD's funding.

Under this change, 284.5 full-time equivalent positions will be moved outside the department. A total of 222 of the impacted positions are communications staff members. The other 62.5 positions are alarm administration, human resources, public information and facility maintenance staff. About $33 million worth of funding will be transferred out of the APD's budget as a result of this change.

Many of the jobs are 911 communications roles. Council Member Alison Alter said those jobs will still exist, but instead of operating under the police department, they will operate under the new Emergency Communications Department.

At the city council meeting, Interim Police Chief Joseph Chacon said he had already spoken with communications staff about the change.

"This really is something that is happening kind of in the background, but for them, would not mean a lot of change in their day-to-day operations," Chacon said.

Other jobs moving out of the police department and into other city departments will include human resources, alarms administration, public information and building services positions.

"In none of these cases are we spending less money on public safety and these functions," Alter said in the council meeting Thursday. "We are moving where they are accounted for and the reporting structures for that."

"From this vantage point, it's clear that the functions remain, the people remain ... but hopefully in a more efficient way that will purvey additional returns to taxpayers in a way that makes sure that we're getting the right first responders to the right places in a way that would make the community that much more safe," Mayor Steve Adler said during the council meeting.

The Austin City Council voted 9-1 on the change. Mackenzie Kelly was the only council member to vote against the ordinance. Council Member Vanessa Fuentes was not present at the meeting.

The change comes almost a year after protests over police brutality called for police reform and budget changes in police departments across the country, including Austin's police department.

"Last year we had thousands upon thousands of people telling us that they wanted to see change. We responded. This item is just really, you know, one of the fruits of that action," Mayor Pro-Tem Natasha Harper-Madison said during the Thursday meeting. "I want to make sure that nobody believes that this in any way is our desire to diminish the ability of officers on the street to respond and do their jobs. It helps our police department zero in on its focus."

The council has already voted to separate other jobs from the APD. In February, the council decided that APD's forensics lab would become independent from the department.

In August, the city council voted to redistribute $150 million from APD's budget, roughly 34% of the department's $434 million total budget. Officials said almost $80 million of the cuts would separate certain functions and related funding from APD.