Austin man motivates others after surviving suicide bombing in Iraq

Qusay Hussein is a survivor. He doesn't let his blindness or the 58 facial reconstruction surgeries he's had so far to bring him down. In fact, he uses his experience to motivate others. 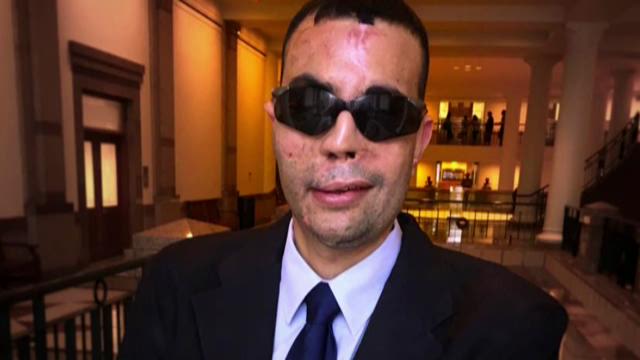 Qusay Hussein is a survivor.

He doesn't let his blindness or the 58 facial reconstruction surgeries he's had so far to bring him down. In fact, he uses his experience to motivate others.

"Oh, God took something from me and then, I can do nothing anymore. No, you can. You can," insists Hussein.

The 28-year-old said he discovered his purpose after a horrific incident on August 3, 2006.

A suicide bomber in a truck blew himself up at the stadium a then 17-year-old Hussein was playing in a volleyball tournament. When the explosion went off right next to him.

"He looked left and right with his truck and blew himself (up)," explained Hussein.

16 people were killed. Hussein was one of 56 people injured. He lost his vision and his nose.

"I just hear like vacuum (makes sound) and then (makes another sound) and then I flew to the air. When I flew into the air, I saw a lot of cars, people flying beside me. When I come to the ground, my nose and my face come before my body," said Hussein.

Hussein instinctively tried to get out of there. But when he got up, he felt something hit his head.

"I stand up to run and shrapnel hit me in my head," Hussein said.

Part of Hussein's skull was gone. He also lost control of his body.

"I just start shaking, and I sit slowly and then slumped to the ground," said Hussein.

Hussein's father arrived but couldn't recognize his own son, his face that disfigured. But after finding Hussein, they arrived at a medical facility where more shock awaited them.

"The doctor, when he saw me, he told my dad 'go get your other kids, because in half an hour, he will die.' I heard that but I can't talk because I just swallowed blood. And then they start bringing dead people, they put them beside me, on top of me, because they thought I died," explained Hussein.

After Hussein's father discovered his son was alive, they drove in search of help and ran into American soldiers. They got Hussein the help that saved his life.

But reconstructing Hussein's face couldn't start for a few more years. There was too much fighting in Iraq and it wasn't safe.

Until 2009, when Doctors Without Borders arrived in the region.

In 2012, Hussein arrived in New York City. Resources, like the School for the Blind, brought him to Austin. His only English at the time, was 'hi, how are you.'

In 2016, Dr. Jeffrey D. Cone Jr. performed the latest two surgeries on Hussein. Dr. Cone is one of only six experts with the training to conduct craniofacial reconstruction in the Austin area. There are about 25 specialists in Texas.

Hussein was referred to Dr. Cone because he couldn't breathe through his new nose. A nose built by other doctors using Hussein's own forehead and skin from his ribs.

"So the aesthetics were there but the function was really impaired," explained Dr. Cone.

"He had an indentation in his scalp and so went in and evened that out," said Dr. Cone.

Dr. Cone also said Hussein is one of his best patients.

"It's a delight. Knowing his background story, his heart, his character, his drive to help people, when somebody like that comes to you and says, 'can you help me breathe better? Can you help me with these scars?' Like, yes, I'd be delighted," said Dr. Cone.

The 28-year-old Hussein speaks to classes. He also talks to people with disabilities and depression, offering motivation and inspiring others not to give up.

"Because when God he take something from you, He give you an alternative, He give you other things," Hussein said.

Spreading his message of hope. His purpose for being here.

Hussein is currently getting an associates degree from Austin Community College. He hopes to transfer to the University of Texas by 2026 where he plans to major in psychology.