The City of Arlington has publicly said, several times, that it can't help because "Misty Creek" is on private property. 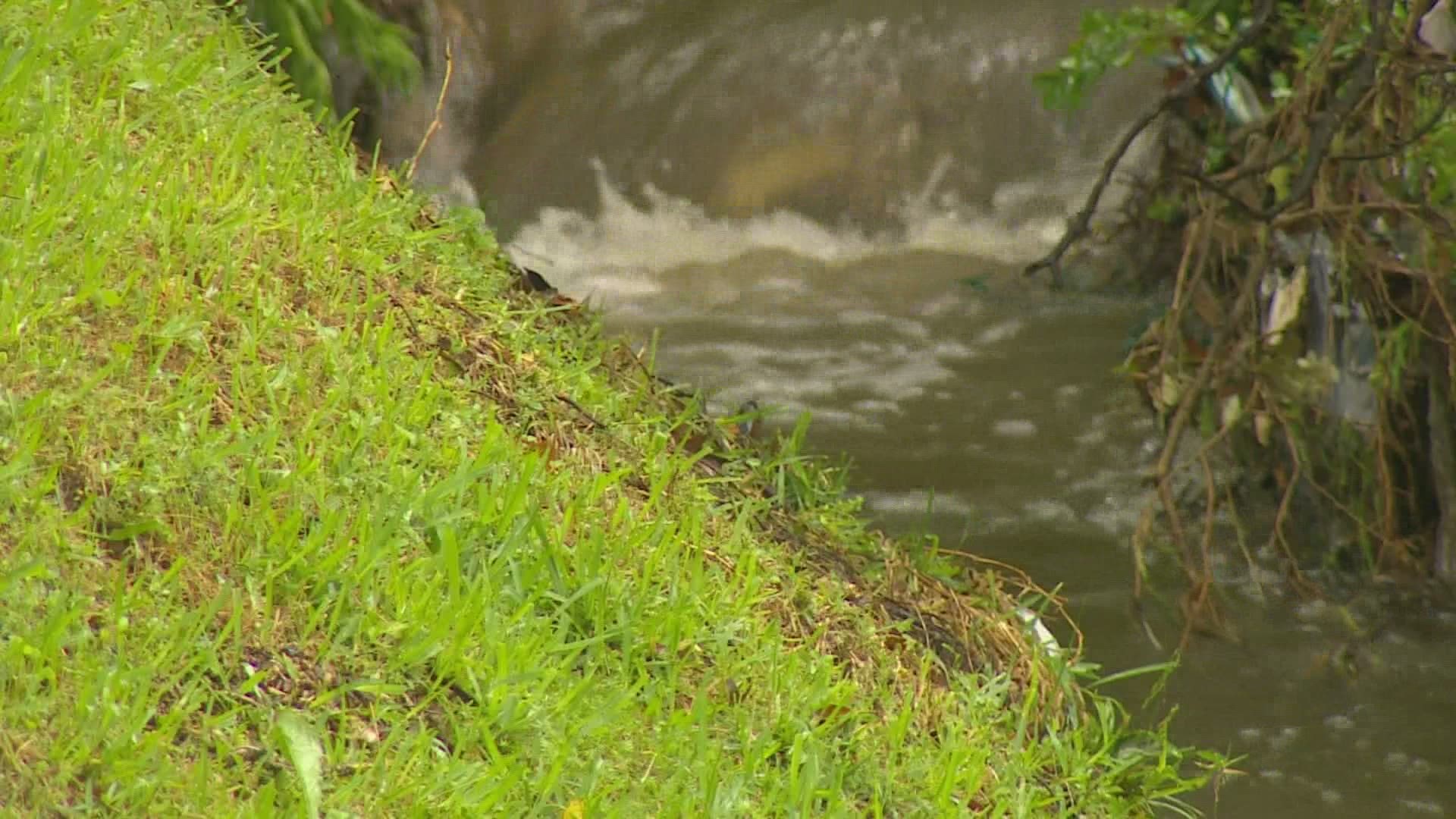 ARLINGTON, Texas — Caution tape now lines the backyard of Charlie Kilpatrick at his Arlington home that he's owned since 2004. But no serious crime was committed, only a crime of ignorance by the city, he and his neighbors allege.

"We didn't do this. The City of Arlington did it," Kilpatrick told WFAA. "Our properties are devaluing, and it's a safety problem for us."

Behind Kilpatrick's home inside the Estates Above Wimbledon is a trickling stream serving as a tributary that has eroded into a flowing creek over the years.

It's unofficially called "Misty Creek," and any time it rains, storm drains upstream built by the city flow directly into it. Per Kilpatrick, the more than 50 drains mixed with poor storm water management mean his and his neighbor's backyard are slowly being eaten away.

Currently, the massive ditch along Kilpatrick's backyard separates parts of his property. It's more than 10 feet wide and is just as deep.

"When we moved in, it was really small; I could jump across it. Since then, it's gotten bigger and deeper," Kilpatrick said.

Kilpatrick is starting to worry. Now, when it rains, he goes behind his home and films the flooding waters crashing back and forth along the creek.

Kilpatrick's neighbor, Martin Lisius, has spent well over $3,000 to save a tree in his backyard from falling in.

He's also constructed a fence and placed it along the eroding wall of the creek to prevent any more damage from happening.

"I had to take cables and attach them to the top of the tree to keep it from falling over into what some of my friends are calling the 'Grand Canyon of Texas,' " Lisius said.

"It's very disconcerting when you come out in your backyard, and part of it is missing. Sometimes, we lose as many as 3 ft. of our backyard per day."

In short, Kilpatrick and Lisius believe that the City of Arlington teed up this problem and smashed it into their property like a golf drive on a pro course.

They say their creek can't handle the amount of water coming from the drains and that the city hasn't done anything to remedy the issue.

"I used to work at Six Flags when I was in high school, and they had this ride called the 'Roaring Rapids.' That's what this is, and it gets worse and worse every year," Kilpatrick said.

The difficult part is that the City hasn't been willing to help when asked or pleaded with.

Kilpatrick showed WFAA emails dating back to 2016 addressing the erosion issue, yet nothing has been done.

Would you want this flowing behind your home when it rains?

It’s reality for neighbors in Arlington as they watch their backyards erode away. They say it’s the city’s fault, that storm drains flood this creek.

But the city ain’t doing much to help.

A spokesperson for the City has said several times publicly that the creek is the responsibility of the homeowners in the area since it resides on private property.

Councilman Raul Gonzalez represents the area and said the council should review the issue.

Mayor Jeff Williams even visited the creek this week to see the erosion and speak with neighbors.

However, he won't be in office come June.

What Kilpatrick and Lisius really want is for the City to help, to divert the stormwater, or at least pay for a solution.

A private estimate revealed that a fix to the situation to alleviate erosion and water flow might cost over $100,000.

"They work for the citizens, and they need to be responsible and take care of their citizens," Lisius said. "We're not going to stop. We're going to get this fixed."

Kilpatrick is trying to stay positive, but he said lawyering up could be the only thing left to do when asked.

"It's just sad," Kilpatrick said. "They just say no. This is going to keep eroding. I'm going to lose more and more land."