"I believe we can do this together. And that is why today I am ending my campaign and endorsing Joe Biden for president," Klobuchar said. 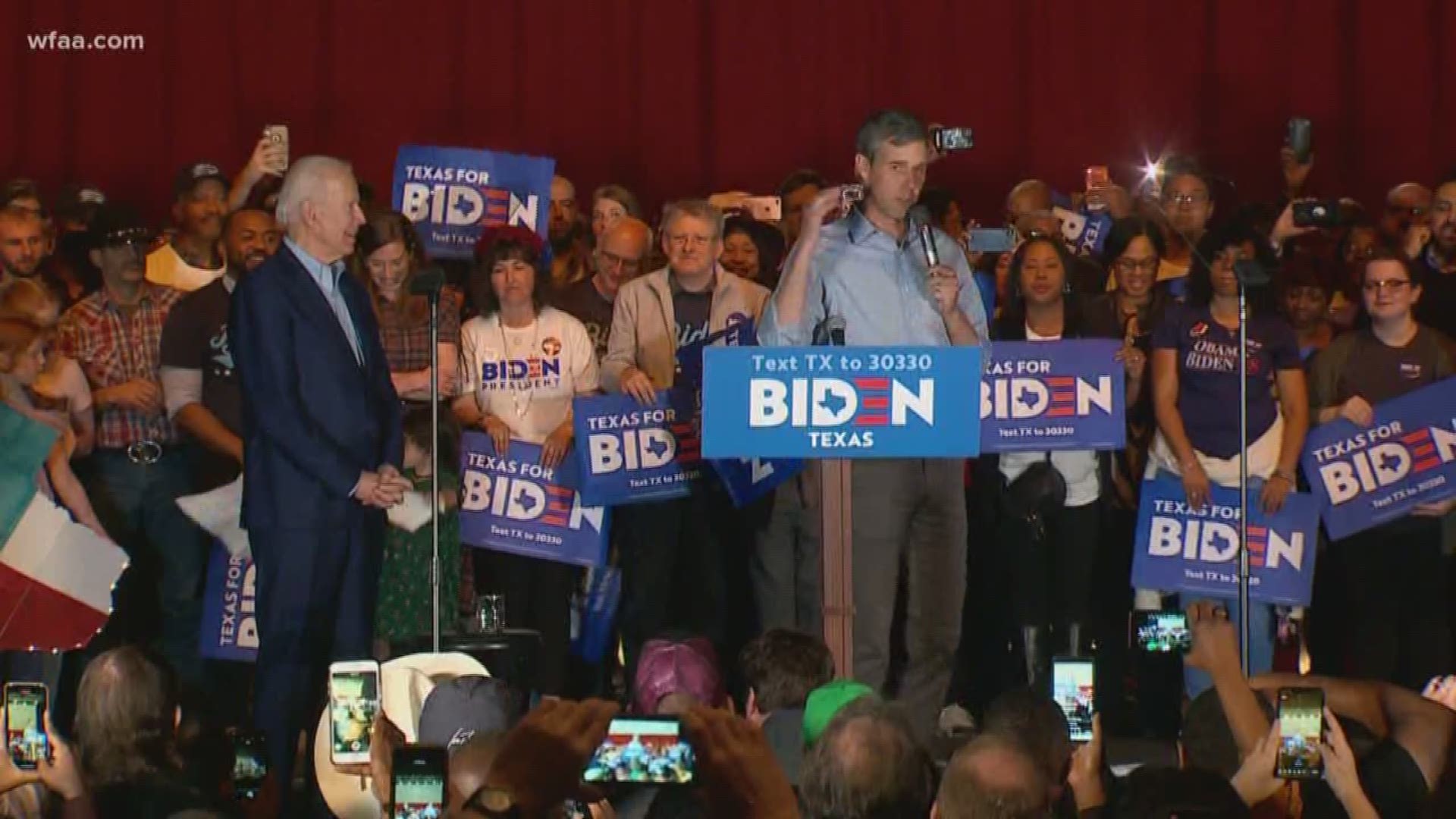 This story has been continuously updated.

Former Vice President Joe Biden chose Dallas as his final stop after a months-long campaign leading up to Super Tuesday.

He left the city with three major endorsements and an energized Texas crowd.

A capacity crowd at Gilley’s reached a fever pitch when, at the end of Biden’s rally speech, he invited former Texas congressman and presidential candidate Beto O’Rourke to the stage.

"Democracy is under attack here and abroad. We need Joe Biden," O'Rourke said.

He said he'd be voting for Biden on Tuesday and he implored all of Texas to do the same.

Then he delighted the crowd by saying he was taking Biden and wife Jill to Whataburger for dinner.

While O'Rourke's appearance might have been a surprise at the rally, Minnesota Sen. Amy Klobuchar's was not.

Hours earlier, Klobuchar announced she was dropping out of the race and joining Biden in Texas to announce her endorsement.

“I can think of no better way to end my campaign than to join his,” she said, pointing to the former vice president.

She and former South Bend, Ind. Mayor Pete Buttigieg both said Biden is the candidate who can unify Democrats.

Buttigieg suspended his presidential run Sunday and flew to Dallas Monday to announce his support for Biden at a pre-rally stop at Chicken Scratch, a restaurant in West Dallas.

“I'm looking for a president who will draw out what is best in each of us and I’m encouraging everybody who was part of my campaign to join me, because we have found that leader in vice president, soon to be president, Joe Biden," Buttigieg said.

“He reminds of my son Beau,” Biden said of Buttigieg to the crowd, “and I know that might mean much to some people, but to me that's the highest compliment I can give to any man or woman.”

Buttigieg, Klobuchar and O'Rourke represent a new coalition of Democrats banding together to support a single moderate candidate, but the question will be whether the endorsements come in time to swing Super Tuesday voters.

More than one million ballots were already cast in the Democratic primary in Texas during the early voting period.

While no one mentioned Bernie Sanders’ name Monday night, it was clear he was on many minds. The former presidential candidates not only want to unify the party to beat Donald Trump, but also to beat Bernie Sanders.

“Most Americans don’t want the promise of a revolution,” Biden said, a veiled reference to Sanders. “They want results, a revival of decency, honor, character.”

Biden expanded on that comment in a post-rally interview with WFAA's Jason Whitely.

"Bernie has really, really solid supporters. But we have to get things done," Biden said. "People are looking for a revival of the decency and honor, and Bernie's capable of that, but the other piece of this is, we've gotta keep the House and win the United States Senate...I think it's important to be able to demonstrate that what you're proposing you can get done. I can get done what I'm proposing."

Most polls have recently put Sanders ahead of Biden in Texas, but that trend only began in late February after Biden’s big defeats in Iowa and New Hampshire. For months, Biden was polling ahead of Sanders in the Lone Star State.

Outside of Gilley's, many Buttigieg and Klobuchar supporters told WFAA they would follow in the footsteps of their first choice for the Democratic nomination and switch their support to Biden.

"Now that Buttigieg is coming over to Biden's side, it just kind of makes sense," one voter told WFAA's Matt Howerton. "I'm kind of hoping for a Biden-Buttigieg ticket."