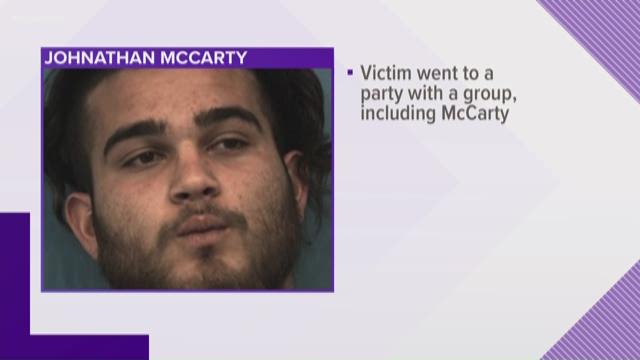 A sexual assault charge stemming from an alleged 2015 incident was filed against 20-year-old Johnathan McCarty, who has named as an alternative suspect in a separate sexual assault case involving Greg Kelley.

McCarty was charged Tuesday with sexual assault of a child in a 2015 case involving a 15-year-old girl, according to an arrest affidavit.

McCarty has been charged in this case after Texas Ranger Cody Mitchell interviewed several possible witnesses “who informed him that McCarty had allegedly sexually assaulted other women in Travis, Williamson, Burnet and Llano counties,” the affidavit said.

The victim told Mitchell that when she was 15-years-old, she went to a party in San Marcos with a group of friends. She told police that she believed McCarty put codeine in her soda. She said at some point she "blacked out," and remembers regaining consciousness in a bedroom of a house in Williamson County. She alleged McCarty then sexually assaulted her in the bedroom even though she told him to stop, according to the affidavit.

The affidavit states the girl said other people were in the bedroom when the assault happened, but no one woke up. The girl said she did report the incident to friends at the time, but did not report it to the police because she had been smoking marijuana and was intoxicated.

Greg Kelley: What we know about his case so far

In May 2017, McCarty, 20, was named as a possible suspect in the case, KVUE reported in October 2017. Kelley was released from jail on Aug. 22, 2017 after a state district judge recommended his conviction be overturned.