"He told me his dream was to play football," Jenger McTee said. "It makes you really grateful to be in a community that will allow something like this to happen." 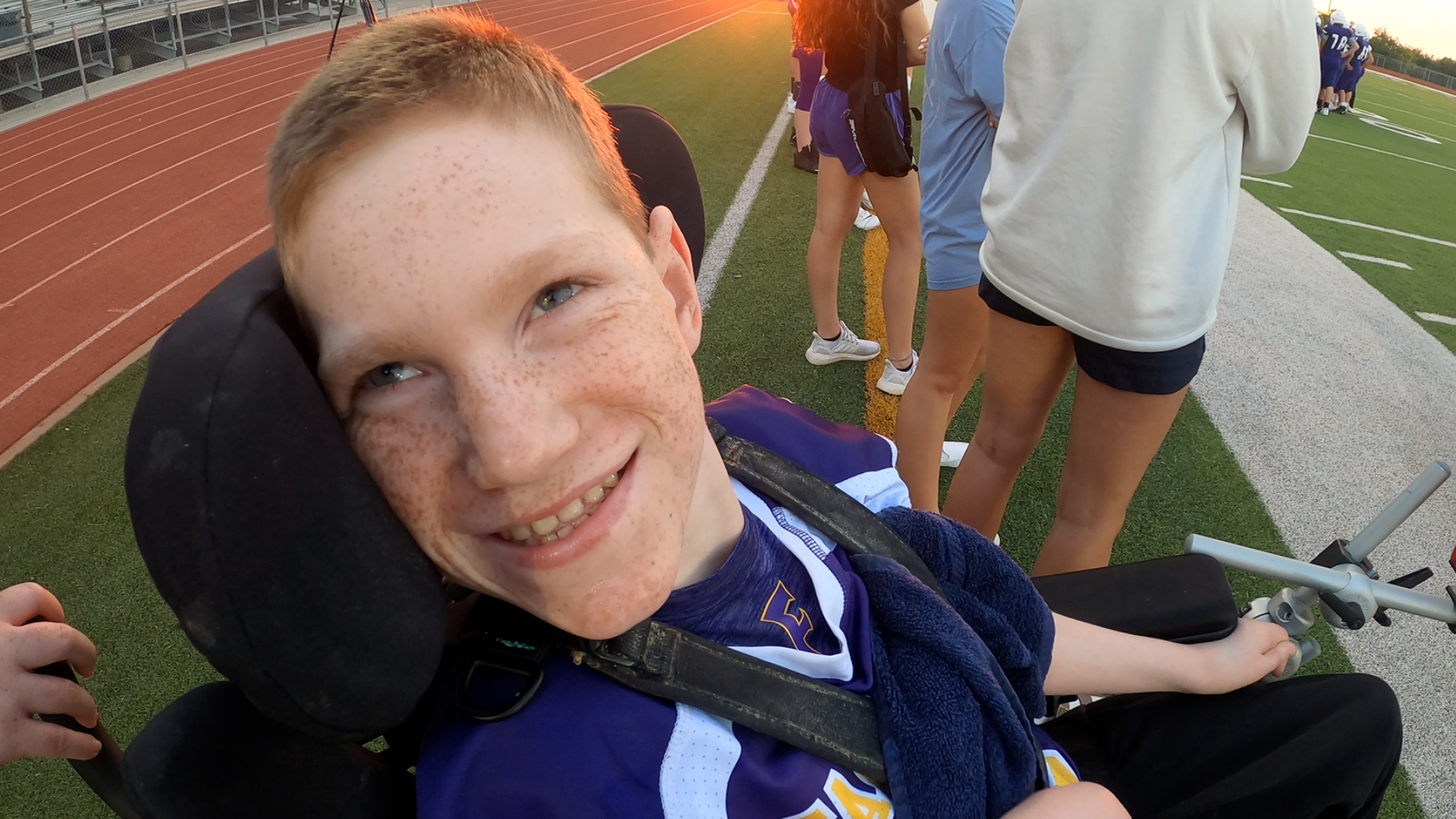 FARMERSVILLE, Texas — Jarren McTee had a dream. He wanted to play in a football game. And even though most of his life is spent in a wheelchair, the community of Farmersville made that dream come true.

Jarren, 14, is an 8th grader at Farmersville Junior High School, home of the Fighting Farmers. And Jarren has been fighting since birth.

His mom suffered a hemorrhage in the final days of her pregnancy and oxygen was cut off, doctors still don't know how long.

The result, Jarren has a form of cerebral palsy that limits his mobility and his ability to speak. But it does not limit his zest for life.

"What's up?" he asked WFAA's Kevin Reece on the computer attached to his wheelchair that allows him to compose words and sentences with the movement of his eyes.

"I'm fine, how are you?" Reece answered.

"I am fine," Jarren said. "I like you asking me questions."

The question Reece had for his mom was about the smiles they both still have after a challenging first 14 years.

"God gave me him exactly how he wanted, and I just keep asking him for his guidance and support and keep going. When you see that smile, it's easy to forget the other things," she said, as Jarren broke into a big grin in their Farmersville living room.

And Jarren smiles for one other big reason: he has a big time job. He's the team manager and water boy for the Farmersville 8th grade football team. His wheelchair is fitted with a water bottle holder.

Jarren's there in his jersey for every game.

The team figured out that Jarren was a gift.

"He's a special kid and our kids love him," Athletic Director and Head Football Coach Brandon Hankins said. "He's a friend to them all. He's an inspiration every day for our kids."

But there's one thing he can't do. He can't play the game he loves. He can only watch.

It was a Thursday game two weeks ago against Community ISD. The coaches worked out the logistics beforehand. With the stadium announcer calling his name, they put Jarren in at tailback. And with his sister pushing him down the field in his wheelchair, Jarren with the ball in his lap made a break for the end zone.

"I just wanted him to feel like he got a chance to shine," Hankins said. "He shows up every single day and puts a smile on my face and the coaches and the kids. So, we thought it was the right time and a special place."

"With him and his sister out there together and her helping him, and hearing the crowd cheer for him, all the kids clapping and jumping up and down, and all the coaches so excited for him, it makes you really grateful to be in a community that will allow something like this to happen," said Jenger McTee.

"He told me he thought he was in a dream. And he was so excited."

"I feel amazing," Jarren said speaking through his computer. "I was thinking...they like me!"

Yes, Farmersville does very much like the young man, his enthusiasm for life, and the life lessons he inadvertently offers.

"We learn every day from him how when you are dealt a difficult hand how to just keep going," his mom said.

So, if you want to meet the new star of the Farmersville Junior High 8th grade football team, that's what the coach is ribbing him for being now.

Then stop by for a smile and a good joke or two.

"Why can't a leopard hide?" he asked. "Because he always gets spotted."

Head to the football field on a Thursday night to find the team manager-turned-running back. He's easy to find. He's the kid on the football team with the biggest smile. And the kid waiting for his next chance to run free again.