The Social Security Administration falsely lists an estimated 6,000 people a year as dead, per the organization's inspector general. 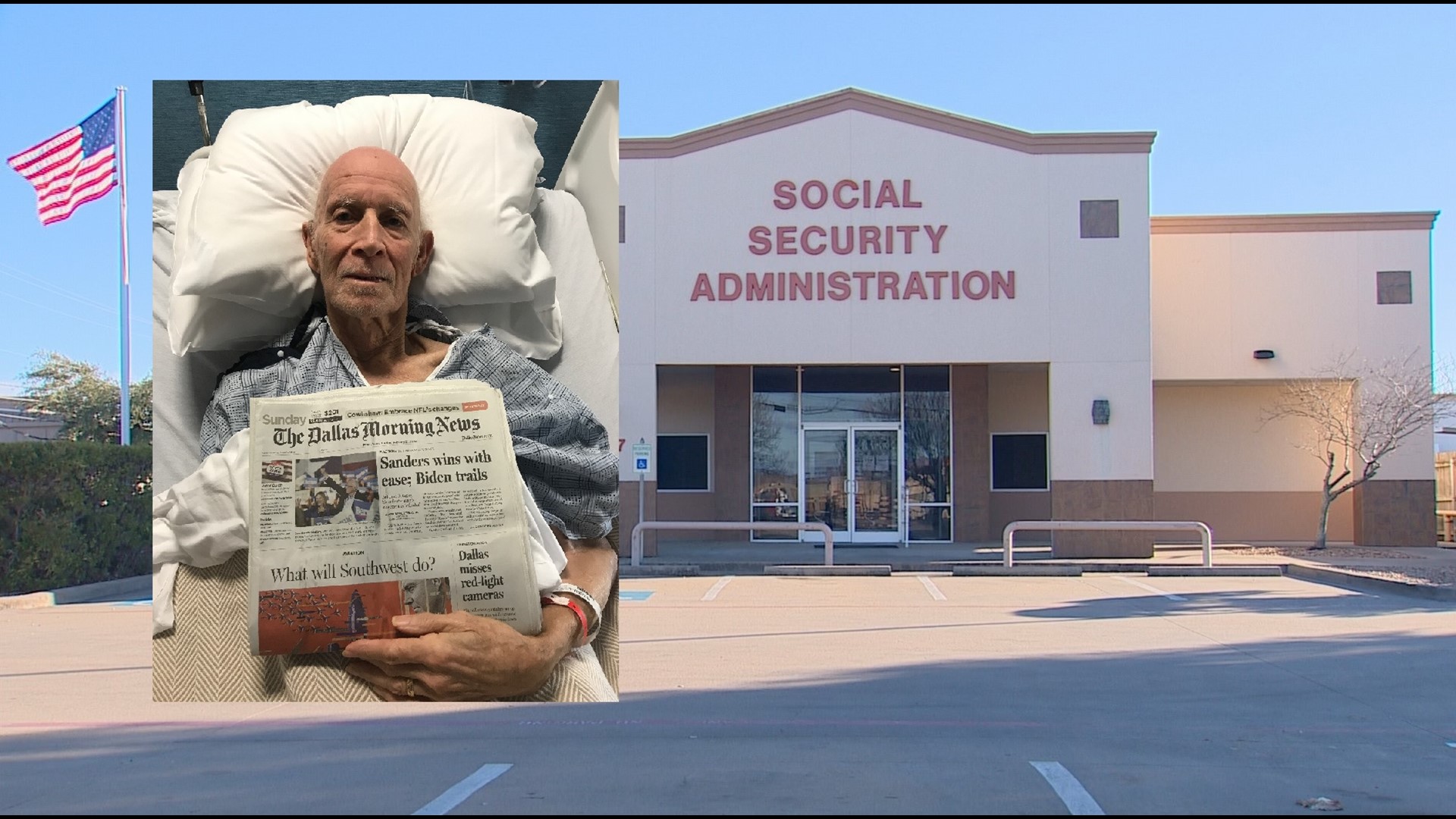 DALLAS, Texas — A 79-year-old man battling aggressive cancer got an unpleasant surprise last week when a mixup with his healthcare coverage led to the revelation that he was falsely listed as dead by the Social Security Administration.

That man, Larry Mitchell of Greenville, is currently hospitalized and receiving treatment for stage 4 Non-Hodgkin's lymphoma at Medical City Dallas.

The error put Mitchell's daughter-in-law in panic mode, and on a complicated journey to prove that the 79-year-old is actually alive.

"This has really messed with his spirit and battling his cancer," Cyndi Mitchell said. "It's their error, but I have to prove that he's alive."

Last week, Cyndi was informed by Medical City Dallas that there was an issue with her father-in-law's insurance payments.

"They said that something was going on with his name and his coverage," Cyndi told WFAA.

Mitchell started looking into the matter and noticed that her father-in-law hadn't received a social security payment into his bank account for February.

When she inquired by phone to understand why the payment didn't go through, Mitchell discovered what was wrong.

"The lady on the phone told me he was deceased," Mitchell said. "I was like what? He's deceased? How did that happen? I told her he was not."

Credit: Cyndi Mitchell
Larry Mitchell poses for a photo in the hospital with a newspaper dated February 23 to prove he's alive.

To ensure that her father-in-law did not have a lapse in coverage or get overbilled for treatment, Mitchell took a photo of him in the hospital with a recently dated newspaper.

She also had the hospital pen a letter attesting that the 79-year-old was indeed alive.

Credit: Cyndi Mitchell
A letter put together by Medical City Dallas says Mitchell has been a patient since February 3rd.

On Monday, Mitchell took the letter and picture of her father-in-law to the SSA office in his hometown of Greenville.

After explaining he was still alive, an employee told Mitchell that her father-in-law was erroneously listed as dead pending the receipt of a death certificate.

Through an audio recording taken by Mitchell, an employee said her father-in-law would be resurrected and that everything would be taken care of.

A spokesperson for the Social Security Administration confirmed to WFAA that the issue was resolved on Tuesday, but didn't elaborate on how the mistake happened.

That spokesperson did send a statement however that read, "Erroneous death data may be due to a human typing error, either from an external source reporting the death to Social Security or by an employee. When it occurs, we correct it as soon as possible.”

However, Mitchell said she was getting nowhere fast until WFAA got involved.

"They said if I didn't have everything in order when I came I would have to go get more proof when this was their fault in the first place," Mitchell said. "They've killed our dad and unless I've crossed my Ts and dotted my Is they're going to turn me away?"

"Their attitude shifted when I told them that you were on the way."

Mitchell told WFAA she would work with Medical City Dallas and her father-in-law's insurance carrier to iron out any issues with payments for his current treatments.

She's now also in the process of checking with Mitchell's bank and other financial operators to see if they were notified about the 79-year-old's death and closed any accounts.

And sadly, this isn't the first time the Social Security Administration has falsely listed someone as dead when they weren't.

The organization's inspector general said in 2017 that the SSA falsely lists an estimated 6,000 people as dead every year.

Credit reporting companies are usually contacted afterward too which can create a mess of financial red tape to unravel for those negatively impacted.

Sometimes it can take months to resolve.

Credit: WFAA
Cyndi Mitchell talks to WFAA after resurrecting her father-in-law at a Greenville SSA office.

Mitchell thinks that's just not fair, especially if this kind of misstep happens to someone who is elderly.

"You know, I'm here for him. But you think about the people who don't have me or don't have any children who can take off work to go prove their alive," Mitchell said.

"What about elderly people who have nobody?"

Mitchell went on to say that her father-in-law has felt depressed over being accidentally declared deceased.