This year, Derek Green wants Black, Indigenous and People of Color to reclaim Independence Day and feel proud to be Americans too. 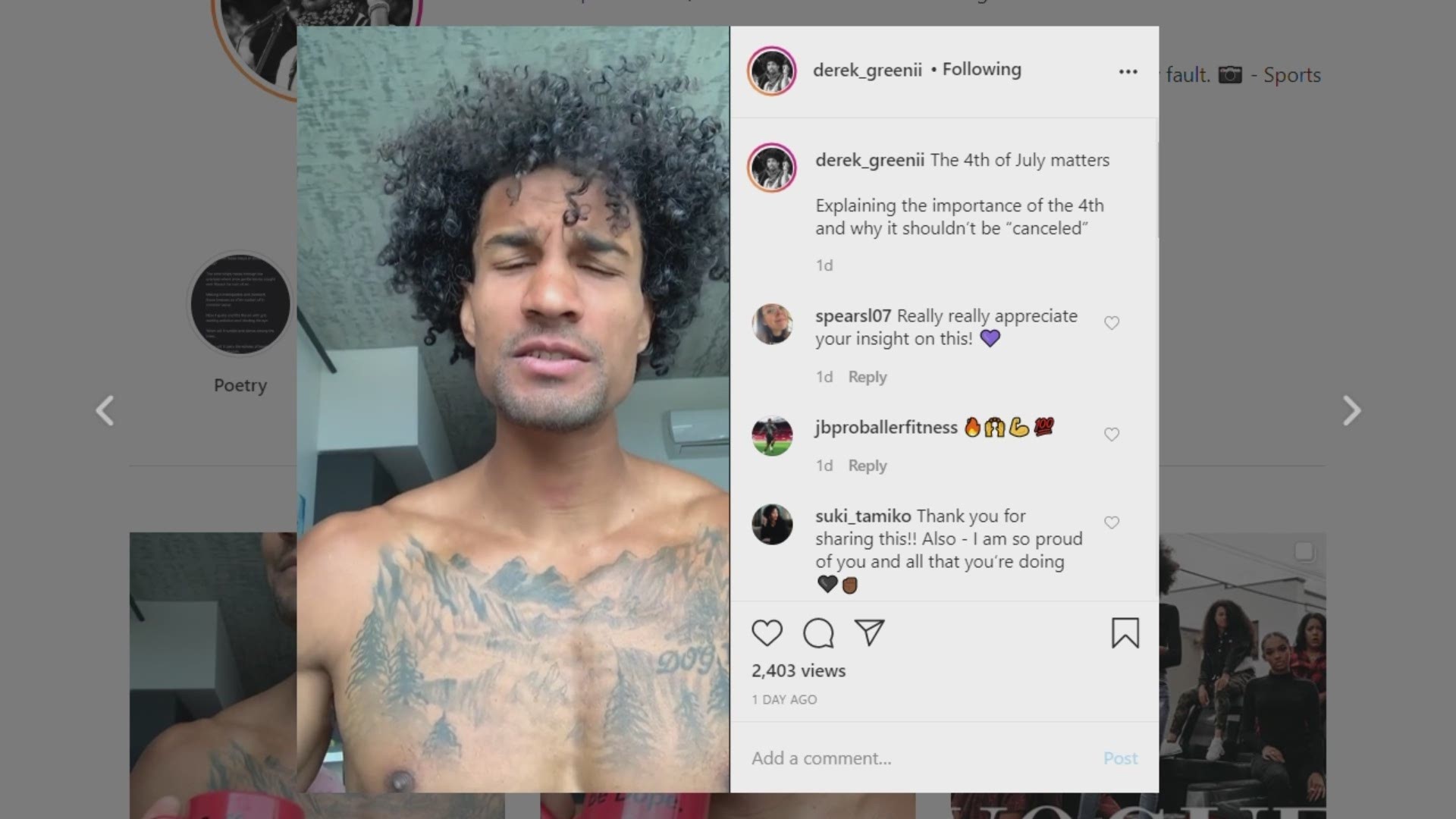 PORTLAND, Oregon — This weekend we celebrate America. Specifically, the signing of the Declaration of Independence, when America officially separated from Great Britain.

It's often a day of fireworks, barbecues and gatherings with friends and family. Of course, because we're still in the middle of a pandemic, the way we celebrate the 4th of July will look a little different this year.

But the pandemic isn't the only reason.

In recent weeks, thousands of people across America have marched in the streets to protest the death of George Floyd, police brutality and systemic racism.

Derek Green is a writer, actor and activist in Portland, who has been out there protesting and speaking to crowds. And he's also using his online platform to share his experiences and views as a Black man in America.

As America's birthday weekend approached, Green posted two videos to his Instagram page, talking about the origins of this holiday. He was inspired by Juneteenth celebrations, thinking maybe the Black community could take pride in other American holidays as well.

"I just wanted to take a couple minutes and talk about the importance of 4th of July and why it needs to be removed from the cancel culture idea," says Green in the first video, sipping his morning cup of coffee. "And people kind of need to stop tearing it apart."

The Fourth of July is his favorite holiday. He grew up in Montana, raised by his Irish-Catholic family, so to him, the holiday is very family-oriented. It's about coming together and spending time with loved ones. But he has also had other experiences on the holiday, and has often felt like the holiday is mainly for white people to celebrate their patriotism.

"No one has been included in this holiday or the celebration besides white people," says Green in a second video on Instagram. "White people are at the top as the truest Americans, and Black, Brown and Indigenous people barely count, if at all."

He wants Black, Indigenous and People of Color (BIPOC) to reclaim the holiday and feel proud to be Americans too.

"I want people to own the fact that we've built this, we've been here. America is ours, whether they want to include us or not," said Green. So own that pride that you absolutely belong here. There's a reason for everything, and that reason is now."

In his Instagram video, Green discusses what happened when the Declaration of Independence was signed on July 4, 1776.

"At the time, the British empire was the greatest empire the world had ever seen, we were under a tyrannical regime, so they rose up and decided as a collective, the entire colonies, which would soon be America, rose up against this tyrannical government, and fought back," he says in the video. "Fought back and won. They won, don't forget this. The reason America exists is because we were rebels."

Green sees some parallels to today when people across the country are realizing something needs to change, and we need to fix the systemic racism that has existed for far too long. People are fighting for what's right.

"It's very uplifting to see all the Black people everywhere in this country right now who are absolutely seizing this opportunity to be heard," said Green. "I feel like we all really are speaking with the same voice and the same words, and it makes the whole movement a lot more powerful when everyone is on the same page."

I asked Green if he felt heard before this round of protests began. And he said no, "not at all."

But the recent global movement inspired him to finally publish an essay on white tyranny on June 7. Before then, he didn't think anyone would listen. But now, after people did read and listen, he has more hope that real change can happen.

So on this 4th of July, he hopes people - especially white people - will keep listening, and have some tough conversations with each other. Yes, there is a lot to celebrate, but there is also a lot of work to do.

"As long as you're celebrating the right things," said Green. "I'm gonna be thinking about being together, being one with the people in this country who are working to heard and working to live in a better and just place - so yeah, celebrate."

Green won't be wearing any red, white and blue on July 4. Instead, he will be wearing all black. His reasoning goes all the way back to 1776, when the Declaration of Independence was signed.

"That was a single point of America, this pure ideal, and then from that moment to the current time it has failed," he said. "So we're gonna wear black because the understanding is that this is a failure and that we need to turn this around. Because the level of pain and suffering that is actually the day-to-day of such a majority of our people's lives in our country cannot be denied. To be American is to stand up to bullies and tyrants and people who are not doing what they're supposed to be doing, and holding them accountable for what they're supposed to be doing. So that's what we're doing. We're gonna wear black because we're holding them accountable for the things that they're doing wrong. We absolutely have to change it. So I'm wearing black."

Whatever you do or wear on this 4th of July, Green doesn't want us to forget where this holiday came from.

"We are all a part of America, and it is imperative for us to fight tyranny. So, I hope everybody remembers that it matters to do the right thing."

WATCH: Why you might see some people wearing black this 4th of July

RELATED: 8 things to do around Portland this Fourth of July weekend

RELATED: Portlanders are playing it safe this 4th of July weekend