In its filing, the company says the “drivers” behind the request are the more than $119 million it invested last year in Dallas. It cited the replacement of 88 miles of distribution pipe, 47 miles of steel pipe, 40 miles of cast iron pipe and 1 million of vintage plastic pipe, as well as replacing 8,0000 steel service lines.

The company undertook a massive replacement of natural gas pipe in Northwest Dallas following the explosions. It resulted in hundreds of homes being evacuated.

Council member Scott Griggs, who is running for mayor, said he will again oppose the rate increase.

“It’s the same story: the rates go up and we don’t get the infrastructure improvements that we need,” Griggs said.

He said he is opposing it because “they haven’t earned the trust of the community” and the company is “brining in huge corporate profits.”

If the city council denies the request, the company can appeal to the Texas Railroad Commission. 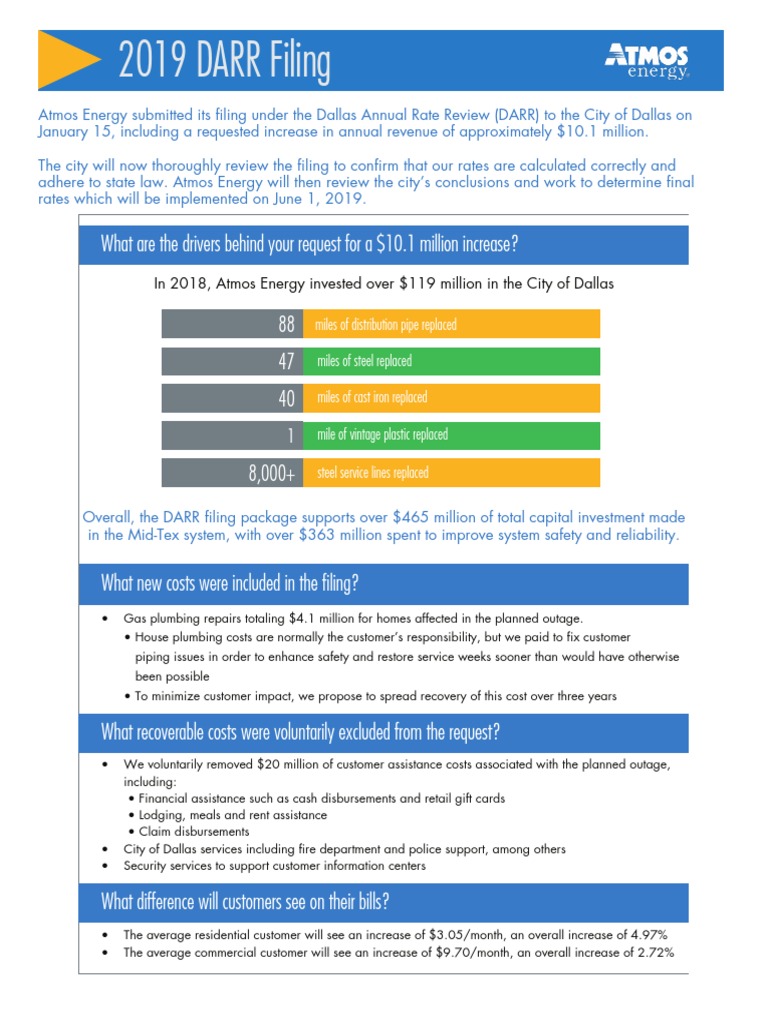 Atmos DARR Filing Summary
Atmos Energy submitted its filing under the Dallas Annual Rate Review (DARR) to the City of Dallas on January 15, including a requested increase in annual revenue of approximately $10.1 million.

Council members rejected a prior rate increase in 2017. The company appealed to the industry-friendly Texas Railroad Commission and won its request to increase rates.

The company’s filing says that the new costs included in the filing include $4.1 million for gas plumbing repairs for homes affected by the planned outage. The company filing notes that house plumbing costs are typically the customer’s responsibility “but we paid to fix customer piping issues in order to enhance safety and restore service weeks sooner than would otherwise been possible.”

"While house plumbing costs are normally the customers’ responsibility, this situation was unique – it was caused by an unprecedented geological event that led to extensive, unsafe customer gas piping issues," said Celina Cardenas, Atmos spokeswoman. "We paid to fix customer piping issues in order to enhance safety and restore service weeks sooner than would have otherwise been possible. Given the unprecedented circumstances, they were reasonable costs for us to incur and therefore should be recoverable."

The filing says that the company wants to “spread recovery of this cost” over three years.

The bottom line: The company wants to recoup the money.

But Atmos also says it is not attempting to recover $20 million it spent on “customer assistance costs associated with the planned outage” including financial assistance, lodging, meals and rent assistance.

“The city will now thoroughly review the filing to confirm that our rates are calculated correctly and adhere to state law,” Celina Cardenas Fleites, an  Atmos spokeswoman, said in an email.

Atmos Energy will then review the city’s conclusions and work to determine final rates which will be implemented on June 1, 2019.”