“The money that they'd set aside for transmission monitoring upgrades, that they said they were going to allocate to that, did they? And how?” 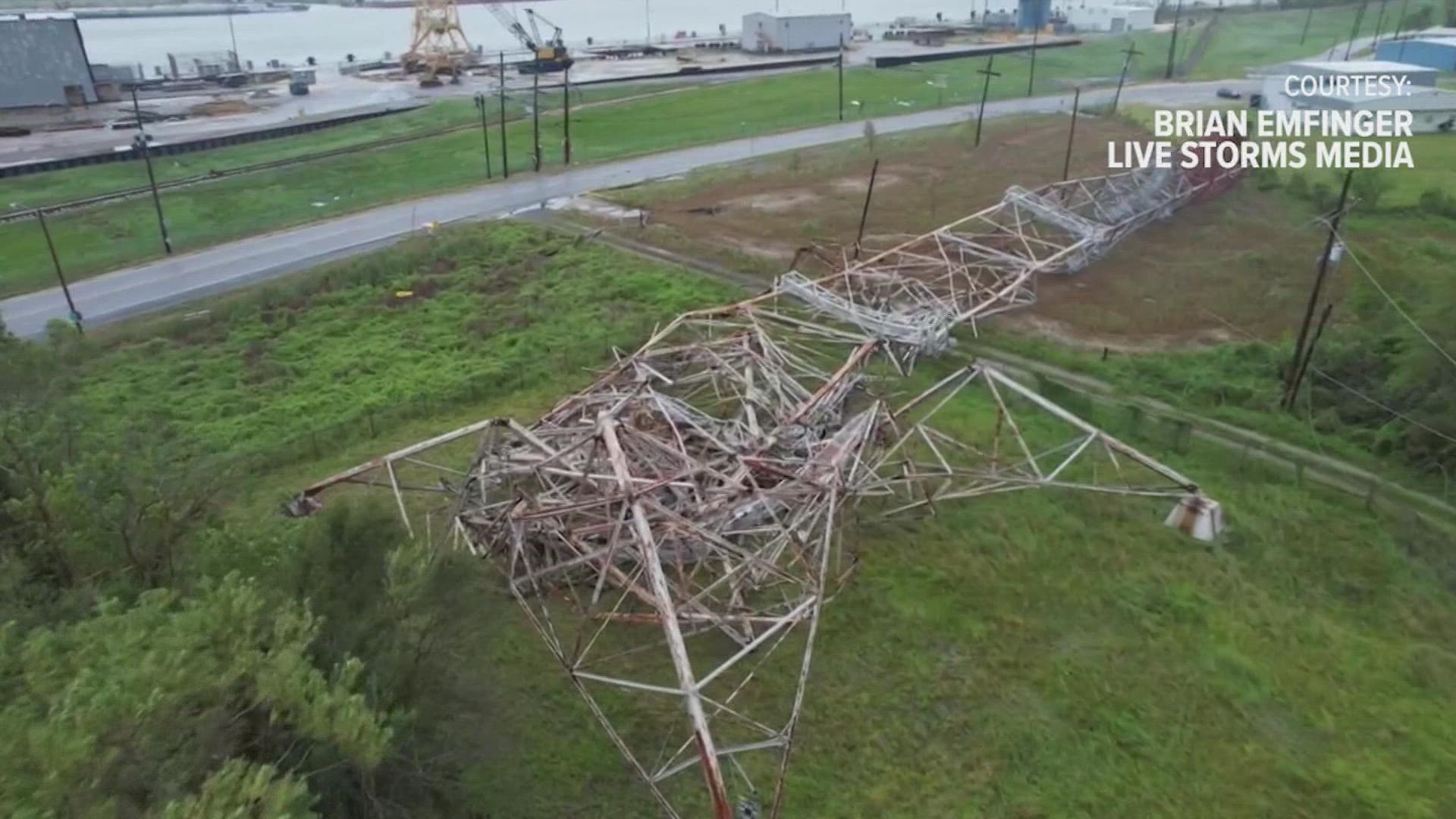 NEW ORLEANS — Government regulators say they are concerned about what Entergy described as a “catastrophic transmission failure” during Hurricane Ida, questioning if southeast Louisiana’s monopoly utility did enough in recent years to fortify the eight lines that carry high-voltage electricity into the area from the regional power grid.

A 400-foot tower that’s part of that transmission system in Avondale collapsed into a rusty heap during the storm. The other seven lines also failed, and the company said that was because of wind damage to just 12 of the 1,500 poles or towers that carry those lines.

Seven of those 12 structures – in addition to the Avondale tower – were destroyed, and five others were damaged, Entergy said.

Entergy reports spending $4.2 billion on expanding its transmission system since 2014. It also spent $100 million last year to strengthen substations that receive high-voltage power from the transmission lines and convert it for distribution to homes and businesses.

Entergy Louisiana CEO Phillip May told WWL-TV that newly built or restored towers and wires and strengthened substations are engineered to withstand 150 mile per hour winds.

But the highest gusts measured by the National Weather Service in Dulac, near where Hurricane Ida’s eye made landfall, only reached 120 knots, or 138 miles per hour.

The tower in Avondale collapsed in winds nowhere close to that. The National Weather Service measured wind speeds in Waggaman, which is slightly closer to the path of the storm, and maximum wind gusts there hit 80 knots, or 92 miles per hour.

The day after Ida, WWL-TV showed the collapsed tower structure riddled with rust. Dr. Craig Greene, the elected chairman of the Louisiana Public Service Commission, wants to know why the tower wasn’t replaced with a sturdier, more wind-resistant tower.

WWL-TV asked May the same question. He said the tower was inspected at the end of last year and didn't need any upgrades.

“That tower was very robustly engineered,” he said. “We're not going to go in and proactively replace a tower like that. I mean, that is an enormously expensive engineered structure.”

The transmission line that delivers power from the Waterford power plants on the West Bank of St. Charles Parish through Avondale to Harahan on the East Bank won’t be restored any time soon. But Entergy restored one of seven other transmission lines, which comes into New Orleans from the east, on Sept. 1, two days after the storm cleared the area. By Sept. 4, six of the eight damaged transmission lines had been restored, the company said.

Since then, the record damage to the distribution system of more than 30,000 power poles, 13,000 spans of wire and 5,000 transformers has been the big challenge. For much of the last week and a half, the utility explained it had enough power but no way to deliver it to customers until crews were able to fix the distribution system.

But elected officials in charge of regulating Entergy say they want more answers about why the utility lost access to the larger power grid at all, especially after customers helped pay for several restorations and upgrades over the last decade.

“The money that they'd set aside for transmission monitoring upgrades, that they said they were going to allocate to that, did they? And how?” said Greene, one of five elected officials on the commission that regulates Entergy outside the city of New Orleans.

“What does the most resilient transmission grid look like and how much will it cost?” Greene said. “It's the perfect storm that it knocked out all eight. I can't tell you more until we look into it as to why.”

New Orleans City Council President Helena Moreno, the lead regulator for Entergy’s New Orleans subsidiary, was not impressed when she went to the site of the collapsed tower. She questioned how such a rusty tower could carry a main transmission line.

The New Orleans City Council has repeatedly clashed with Entergy about the reliability of its equipment. The council fined Entergy $1 million in 2018, claiming Entergy’s distribution system was among the least reliable in the country. Entergy is fighting that fine, and Moreno said the utility has improved its reliability since then.

The company is also seeking to charge customers to cover $2.4 billion in power restoration costs for 2020 storms that slammed the state, including Hurricanes Laura, Delta and Zeta.

Moreno said she wants to make sure New Orleans customers are not stuck with a bill for any equipment failures Entergy could have prevented. She questioned why Entergy waited to fire up its local power plants until it started bringing in transmission power.

Entergy sold the new gas-fired power plant in New Orleans East as the only way to generate power internally if the transmission lines all fail. In the first days after Ida, the company said it needed transmission power to start the plant. Later, it changed its story and said it could have “black started” the plant without an outside power source but decided it was not the safest method.

Moreno said she is working closely with Greene to make sure Entergy responds to its regulators. Like Greene, she sent Entergy a letter asking it to find any way possible to avoid charging customers for the costs of restoring power after Ida.

“How do we rebuild better and how do we also make sure that it's not ratepayers who are the ones who are having to foot this whole bill?” she said. “Because that's certainly not fair and it's not going to happen on my watch.”