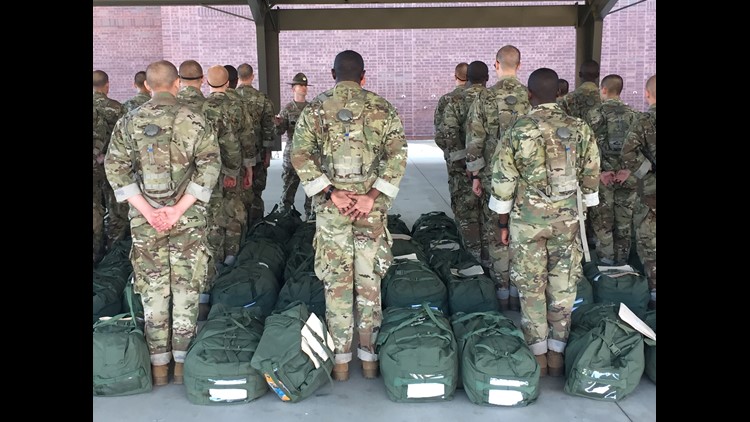 BLOG | Not everyone has PTSD

Jeremy Campbell, Executive Storyteller of Charlie Foxtrot was embedded at Fort Benning during the beginning of Basic Training, where he discovered a silent strength amidst all the yelling. This is his blog about his experience there.

Jeremy Campbell, Executive Storyteller of Charlie Foxtrot was embedded at Fort Benning during the beginning of Basic Training, where he discovered a silent strength amidst all the yelling. This is his blog about his experience there.

“Welcome to the Army. Take your time.”

That was the drill sergeant’s decibel climbing challenge shouted sarcastically toward the two hundred forty men of Charlie Company 1-46 Infantry.

Under the blaring August sun, soldiers in training ran off a bus outside a Fort Benning barracks to begin their military career. Each was loaded down with about fifty pounds of gear and given the first order: “Run.”

BOOTCAMP | Inside the first days

Their destination was only about three hundred yards around the corner, but they didn’t know that. It could have been a five mile run for their life, based on the tone from the drill sergeants. They circled around the new soldiers like swarming sharks making the young men feel utterly surrounded.

Some took the aggressive wrangling in stride. Others nervously dropped everything, scampering to pick up their camouflage caps before their superior caught them from behind.

As I followed the pack with my camera, I felt a switch flip on for these young men. In that moment, they were undeniably present. I call it “Military Zen.”

Spending the first few days of Basic Training on base showed me the Army variation of “Be here now” - present, focused on the moment, devoted to the mission.

I first noticed it while interviewing these soldiers at a very specific turning point in their lives: exactly one hour before they began Basic Training. I asked each of them similar questions: How do you feel about the possibility of fighting in war? Are you nervous? What are you afraid of?

Their answers were consistent. Their focus was on the excitement of beginning their service. They would prepare for the worst, but they didn’t seem afraid. Instead, these young men were prepared to become prepared.

The next day we interviewed a staff sergeant with years of military service under his belt. He was re-enlisting to serve with the Army until 2025. He had a more telling explanation when asked if he had any fears.

That’s Military Zen, if you ask me.

Members of our Armed Forces are focused, driven men and women who prepare for whatever may come. They are in the moment, dealing with the matters at hand to accomplish the mission at hand.

The future – that’s something they’ll prepare for, but not worry over until their mission puts their battle plan in action. To succeed, they remain present.

However, the past can be much more crippling as they return home from war zones, suffering from the moral injuries of combat and fighting PTSD after enduring moments so dark I’m not sure I could even dream of them in a nightmare.

According to the Veterans Administration, 20-percent of all service members who deploy return with PTSD, 22-percent suffer a Traumatic Brain Injury and 7-percent have both. That averages out to about one in four being affected.

There’s another side to the numbers. The fact is most people who serve do not emerge traumatized or suffer from brain injury; 72-percent aren’t diagnosed with either.

Veterans are among our nation’s brightest assets. The skills learned while serving translate into some of the most hirable, admirable attributes of the American workforce. They’re leaders who go on to run companies, families and hold government office – with and without enduring symptoms of PTSD.

“Welcome to the Army. Take your time.”

In a way, that sarcastic phrase actually fits, as service members prepare for an uncertain future by finding clarity in the moment, on and off the battlefield.

You can send your comments to Jeremy by emailing him, posting on his Facebook page, or sending him a tweet.

According to the Department of Veterans Affairs, 20 U.S. veterans die by suicide every day. About 70 percent of veterans who took their own lives were not regular users of VA services. Veterans with less-than-honorable discharges are the most vulnerable group. These less-than-honorable discharges are often issued to service members for minor misconduct, that experts say, can be behavior linked to PTSD, TBI or other trauma-related injuries.

Now is the time for Fairness for Veterans. Let's give them hope to help heal the invisible wounds of war. Please support this common sense, bi-partisan bill to require the military discharge review boards to consider mental health diagnoses like PTSD and TBI.

I am asking the congressional delegation from my state to commit to changing the discharge review board policy by passing the Fairness for Veterans Act.