Photographer Nick Wagner, along with Uga the Georgia Bulldogs' mascot, were two of those who were caught in the path of Bevo's charge at the Sugar Bowl. 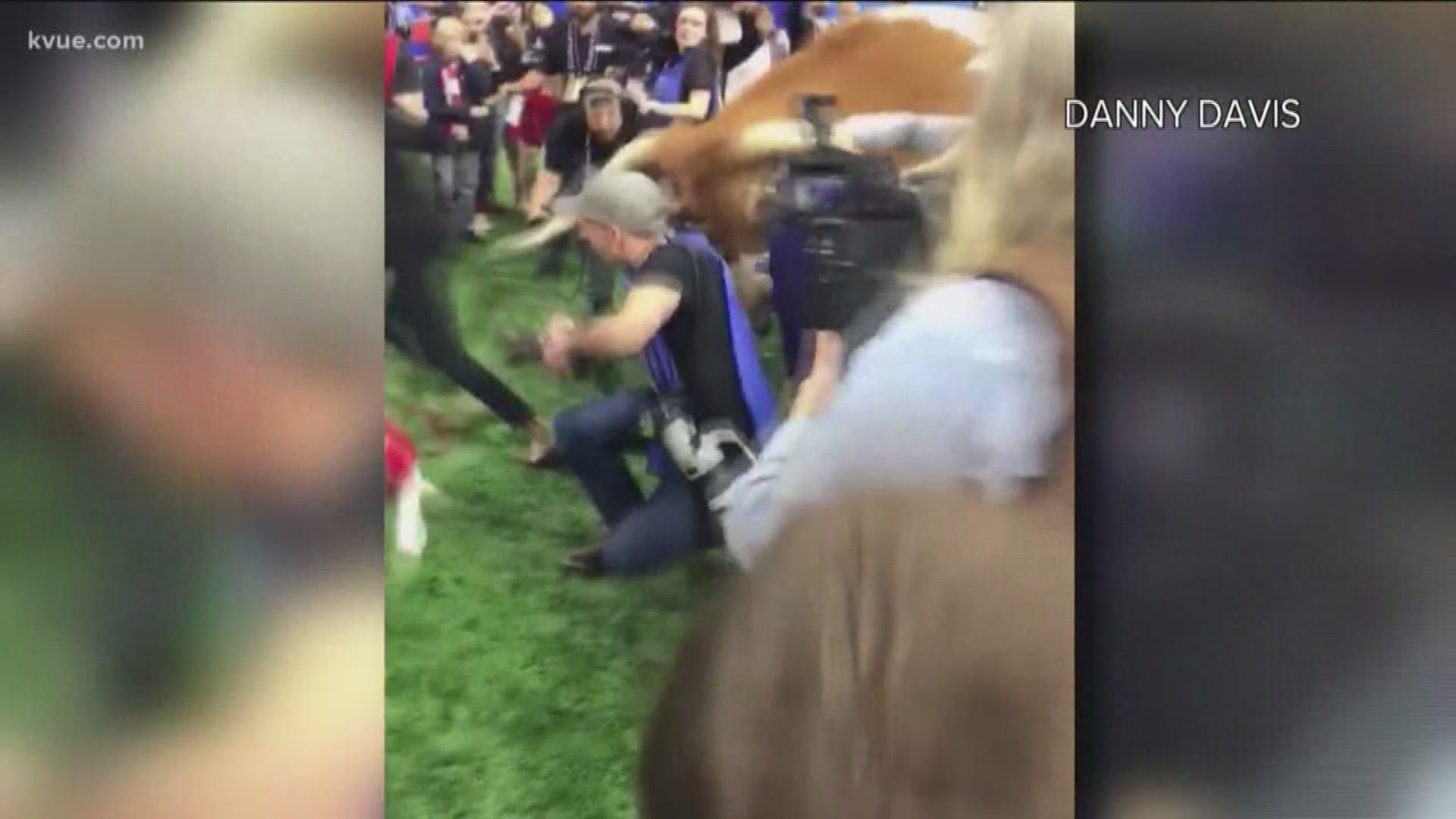 "All of a sudden, people start running, I hear some clamoring in the background, I turn around and I see Bevo's horns coming toward me," said Wagner. "I was like, all right, it's time to go."

Of all the hits from the New Year's Day bowl game, this is the one that has everyone talking. And Wagner took one for the team.

"He got me, I don't know with his horn or what, in the back, then he got me with his right horn," he remembered. "The hook, I got hooked."

Wagner said he's been shooting the Longhorns for two years, and he's never had this close of an encounter with Bevo. And this one brought some pain.

"I didn’t even feel the back pain that I'm feeling today until I sat down to edit, the game was over and the emotions were draining out," said Wagner. "It's a fairly good scratch, a fairly good memento."

Longhorns are known as gentle giants.

Bevo's owners, Betty and John T. Baker, invited us out to their ranch earlier this fall. That's the place where they train Bevo's handlers -- the Silver Spurs.

"He's a live animal but he's pretty amazing. He's docile, always been relaxed when we've been around him," said Clayton Helbing, a UT Silver Spur.

The Bakers have owned the last three UT mascots. They teach the Silver Spurs how to keep Bevo calm and contained, never drugged.

"They're interesting animals and they respond in kind. You treat them good, they treat you good," said John T. Baker. "There's never been one cc or one milliliter of any type of medication given to any sunrise steers since 1988."

"It was just one of those circumstances where it happened," said Wagner. "I'm alright."

Despite the charge, Wagner said he has no hard feelings for the high-profile bovine.

"I hope this doesn’t change anything about him whatsoever because he’s Bevo, he's a staple of Texas football games," Wagner said. "The crowd and the players alike really feed off of him. When he gets shown on the big screen and has the spotlight on him, the whole place gets rockin', DKR gets turned up and the players feed off of that, so it adds to the experience that is Texas football."

In an ironic twist, Wagner and Bevo met up again at a gas station in Baton Rouge on their way home.

Happened upon the big guy at a gas station in Baton Rogue on the way home today. No love taps from him this time, just a pleasant side eye. pic.twitter.com/CIETPDgM9D