From Africa and homeless, a Fort Worth teen found football. It's now sending him to college

Leslie Adindu, 19, is a senior at Arlington Heights High School in Fort Worth. He signed with Southwest Baptist University Wednesday. 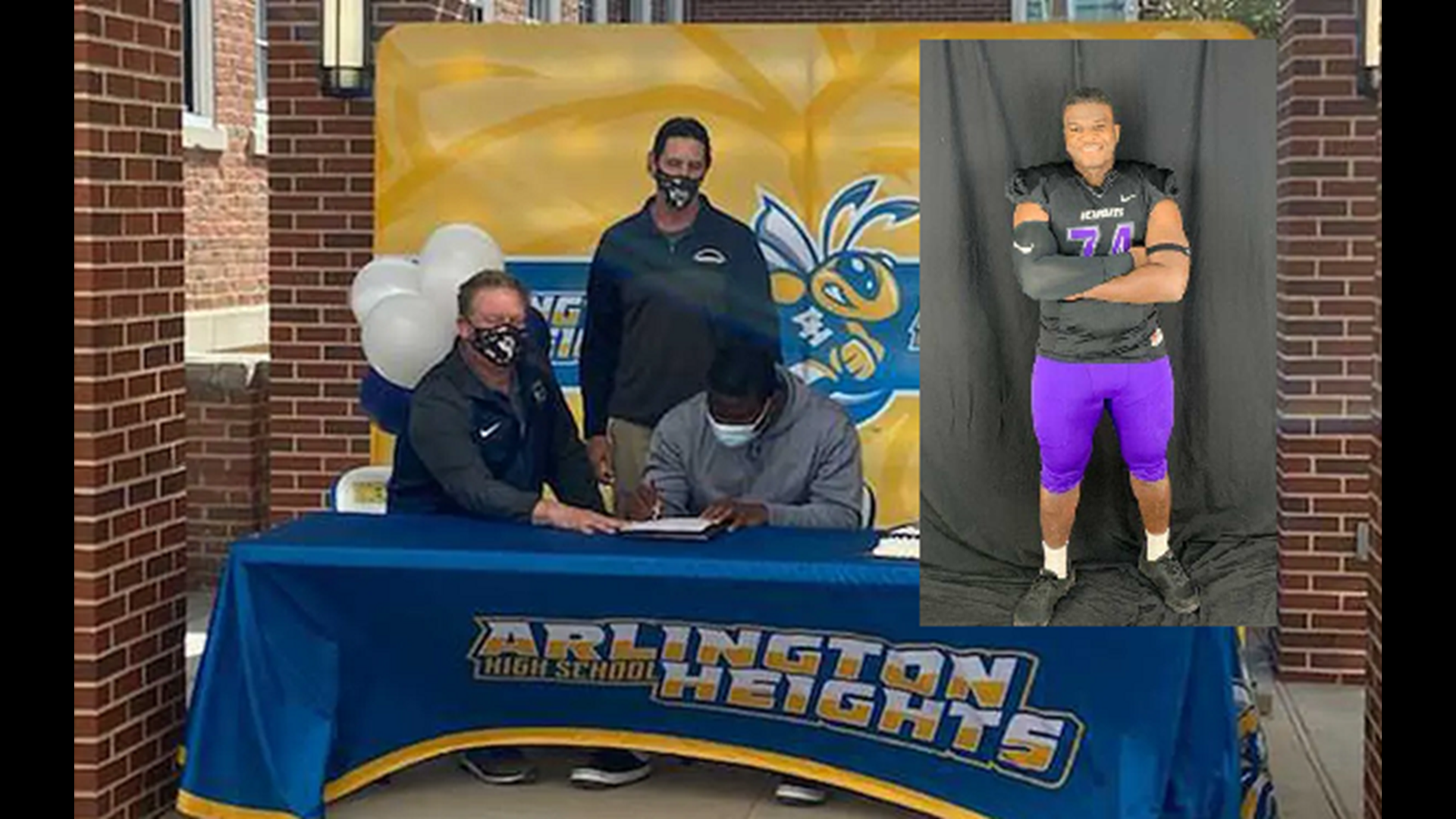 FORT WORTH, Texas — A Fort Worth teen is in the middle of a remarkable journey that began in an African city and is currently winding its way to a college football career.

Leslie Adindu, 19, is a senior at Arlington Heights High School in Fort Worth.

Towering at 6 foot 4 inches, the defensive lineman signed to play football with Southwest Baptist University in Missouri on Wednesday.

Oh, and you should know, he's never played a varsity football game in his life.

"I didn't believe it at first, but I feel like God was looking out for me," Adindu said.

Adindu has a wild story. He grew up in Aba, which is a city in Nigeria.

He moved to Fort Worth in September 2019 to live with his father. It was at this moment when he met football Coach Charles Perry.

"The first day that he came in, he naturally stood out," Perry said. "I asked him if he would like to play football, and he said he wanted to give it a try."

Adindu started on the junior varsity team, but he only got to play a few games because the 2019 season was almost over.

He had never played American football but knew of it. He told WFAA that rugby and soccer are more prominent where he grew up.

"I normally would watch high school movies and all of that, where you would see the football players," Adindu said. "But I wasn't really interested in it."

Coach Perry said there were some learning curves but that Adindu fit right in on the team.

"We had to teach him how to get in a stance and how to put his gear on," Perry said. "But he continued to get better and better every day."

During Adindu's first JV game, he recorded three sacks and two tackles for a loss.

He said he didn't realize how big of a deal it was until after the game.

"I didn't really know until all my teammates told me," Adindu said with a smile.

"All I knew was to go after whoever had the ball, so that's what I did."

Adindu fit into his new American life well until February of 2020.

He and his father had a falling out, which resulted in Adindu's dad moving away.

"I had to call up one of my church friends and he ended up taking me to a homeless shelter," Adindu said.

And since that date, Adindu has been living and working at the Union Gospel Mission in Fort Worth.

Because he's 19 and not a minor, Adindu has to work at the homeless shelter to keep a spot there. His schedule is from 3 a.m. to 7 a.m.

After that, he would go to school. Adindu, shockingly, said that he didn't mind, adding that his upbringing in Aba was no different.

There, you have to pay to just attend school per Adindu.

"It didn't take me long to get adjusted to it," Adindu said.

Still, that's heartbreaking. Not to mention, all this was happening in a pandemic.

But Adindu showed up for summer workouts, pledging to play his senior season.

"He never lost his heart this whole time, going through all of the things we and he went through," Perry said.

Because Adindu is 19, the UIL didn't allow him to play at the varsity level, Perry told WFAA.

So, for his entire senior season -- Adindu played on the junior varsity team.

Perry and Adindu were crushed. They pleaded to the UIL to allow Adindu to play but didn't get anywhere, Perry said.

Still, Perry knew Adindu was good. He knew that maybe there was a shot to get him on a team at the next level.

"We felt like if we could get a little tape on him for people to see then someone may take a chance on him," Perry said. "Leslie knew it would be a long shot."

Even though Adindu couldn't play varsity, Perry said there was nothing preventing him from playing a varsity scrimmage.

That's where the school got their film.

His football highlight tape is only 1:20 long vs. one opponent.

That's unheard of in football circles.

Ultimately, Adindu chose Southwest Baptist University. It's a private Christian school, something Adindu said his mother was proud to hear.

"She's very religious, so she was happy to know that's where I was going," Adindu said.

The 19-year-old is hoping to study law or business. His mindset is to make a better life than the one he had growing up.