Holocaust survivor Max Glauben relived painful stories from his past to help the rest of us build a better future. 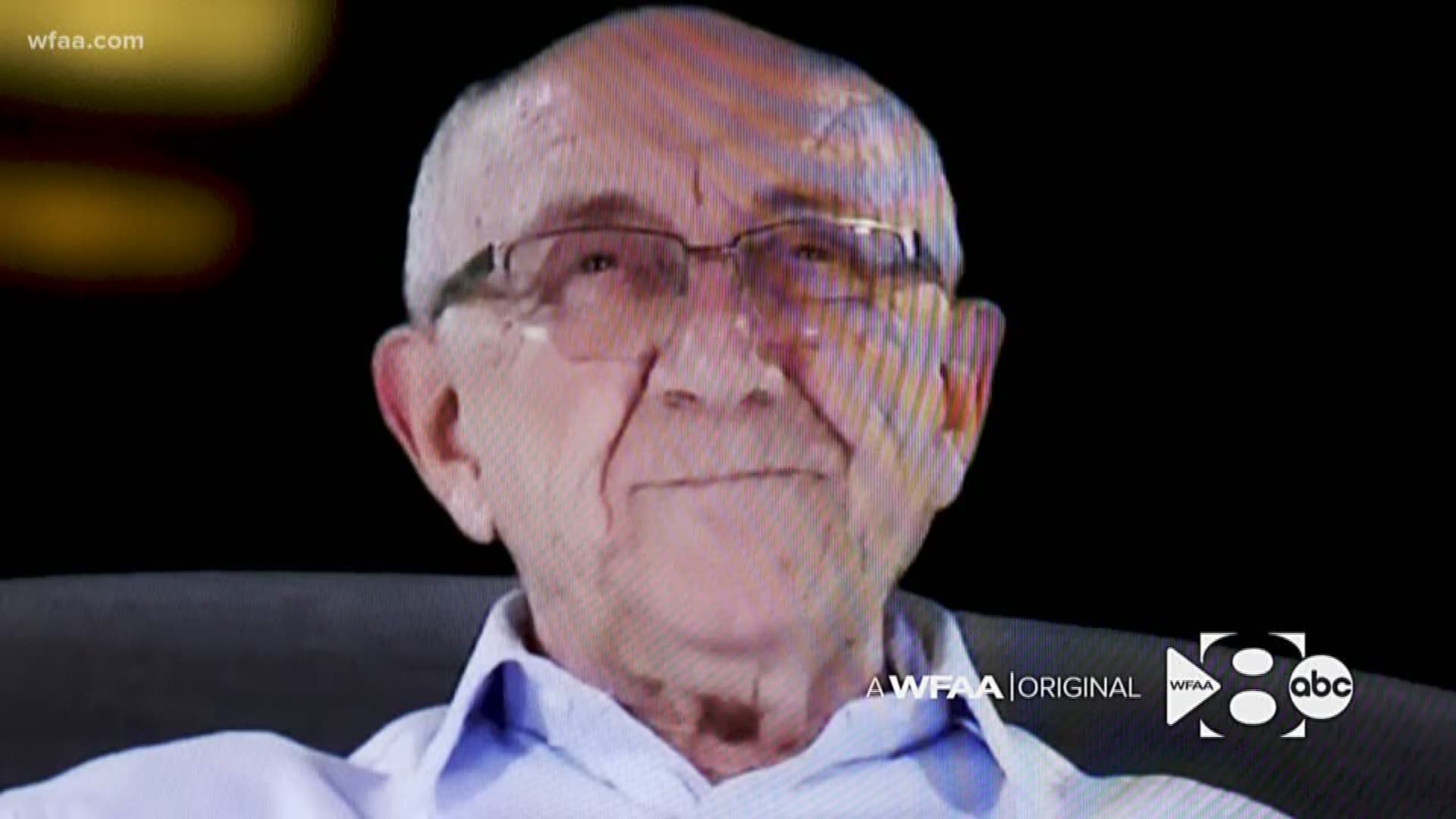 DALLAS — Sitting in front of a video screen, Max Glauben couldn’t help but laugh out loud.

It was like looking into a mirror that talks back.

“It feels strange, to a point,” Glauben said as he looks at an interactive hologram of himself.

In 2018, he spent more than 40 hours over the course of a week in a specially designed 360-degree studio. With high-tech cameras recording him, he told stories about his youth.

The result is the interactive hologram that can answer questions on demand.

The hologram is almost complete, but Glauben got a sneak peek at a simplified version. And he was impressed.

As he watched the video come to life and sing a Hebrew song, Glauben smiled and sang along with it.

He is a survivor of the Holocaust. Six million Jewish people were murdered in the Holocaust, including Glauben’s family.

“This is my greatest reward in my lifetime,” he said, gesturing to the video, “To tell people about what has happened so they could respect the rights of other people and not allow another Holocaust to happen.”

The same day he saw the sample video, Glauben got his first look behind the scenes at the 55,000-square-foot Dallas Holocaust and Human Rights Museum that he and others worked for four decades to build.

Dallas has had a Holocaust museum for many years, but it has moved several times and was always relatively small.

The new center will open on Sept. 18. It is the result of a $78-million capital campaign.

“I think it’s unbelievable,” Glauben said as he walked through for the first time.

When construction is complete, Glauben’s life-sized hologram will live inside the museum’s Dimensions in Testimony theater - one of only two theaters like it in the United States.

“We’ll have microphones that come down from the ceiling, so any place you are seated you can ask a question of Max,” said Mary Pat Higgins, president and CEO of the museum.

The technology is so advanced, the hologram should be able to answer any of those questions, which will give visitors the feeling of speaking face-to-face with a survivor even after Glauben is gone.

“One of the most important experiences our visitors can have is an interaction with a survivor and sadly we’ll lose that opportunity in a short time," Higgins said. "So, this experience will be as close as we can get."

The center will not only educate people about the atrocities of the Holocaust but also the struggle for human rights across the world and equal rights in America.

“When a student comes through this museum and they learn this history and they see what happens when prejudice and hatred go unchecked, it shifts their thinking,” Higgins said.

A World War II-era boxcar, which had been displayed in the old Holocaust museums in Dallas, is prominently featured inside the museum. Boxcars were used to move Jewish families to concentration camps, which Glauben remembers.

“Consider it – no food, no utilities, no water,” he recalled as he stood inside the boxcar. He believes he spent five days there, maybe longer.

Glauben said that he’s learned to become an actor when he shares stories about the unspeakable horrors he endured as a child.

“I close my eyes and see what I experienced, but I’m a bystander describing what happened, not an individual that was hurt, because I already suffered the one hurt,” he said.

“But that doesn’t mean that at night I won’t go to sleep and dream about what I said," Glauben said. "Your mind plays tricks on you.”

Glauben is now 91 years old. He believes he was destined to live a long life for one reason: if he shares his past, maybe it will help the rest of us build a better future.