The affluent town just north of Dallas slams the brakes on rental bikes. 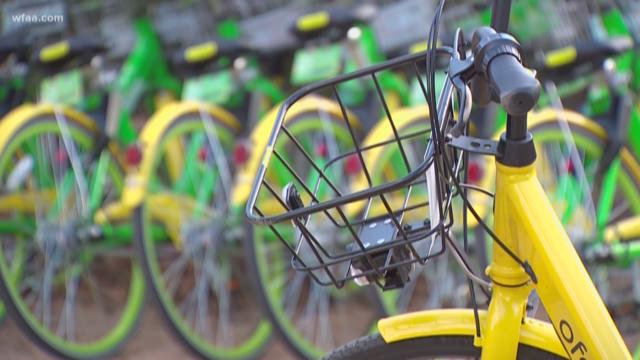 HIGHLAND PARK, TX—While the City of Dallas and Plano weigh what to do with rental bikes scattered throughout their cities, Highland Park is making a swift stand.

If you've been through Downtown Dallas you probably have seen the hundreds of rental bikes you can pay to ride.

They belong to several bike-sharing companies, and complaints with the city are growing by the day.

Many are upset with the overall clutter the bikes create, and that they obstruct sidewalks. Not to mention, riders oftentimes recklessly abandon the bikes after a trip is done.

Up the road, Highland Park is having similar issues and feels like Dallas' lack of regulations is to blame.

Council documents show that Town Administrator Bill Lindley sent a frustrating note to Dallas' city manager in November saying, “Resident complaints and the demand on our employees to police haphazard scattering of bikes throughout our community by the companies' patrons, take away from accomplishing the work of the Town.”

Those concerns led to the passing of an ordinance by Highland Park leaders last month. The law, which goes into effect next week, basically prohibits bike sharing activity within the town.

It specifically says, “no person shall park, or otherwise leave abandoned, a bicycle on a street, sidewalk, park or other public property without permission from the town.”

The short of it? Bike sharing companies must daily collect their bikes left in Highland Park, or the town can impound them.

The companies would then have to pay fees to get their bikes back that range from $30 to $100 per bike.

If the bikes aren't collected after 15 days, the town can auction off the bikes for its own profit.

Council documents say that each bike is worth between $200 and $400 each.

WFAA reached out to several bike-sharing companies for reaction, but none had returned calls for comment Saturday evening.