"You throw away the idea of health, money and whether your family will accept it or not and just go with it." 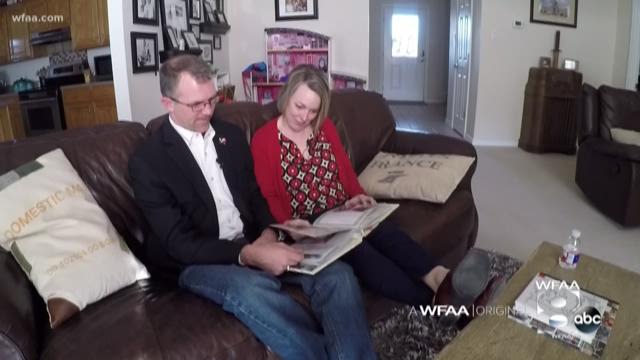 When you're from a small town, life is simple -- but beautiful.

"We got married when we were in college," Davey Edwards said. "We wouldn't have it any other way."

Davey and Sonja Edwards met, married, and eventually were ready for more.

Though they started life together young, it wasn't so easy. By the time Sonja was 25, they'd already tried in vitro fertilization twice. It wasn't working. Something was happening to the embryos.

"Each time, almost 20 of them were successfully fertilized," Sonja said, "Then on day five, both times, they started dying off quickly."

The problem left the Edwards' doctors in Dallas and Fort Worth stumped, and the strong Christian couple felt deflated.

"When you go through IVF and you watch it fail... you question whether or not God's even existing -- if He can even hear you," Davey said.

Soon after, the Edwards adopted a 9-month-old baby in their hometown of Decatur. That baby, Ryan, is now a young man -- 19-years old -- and studying at Texas A&M University, just like Davey and Sonja.

They could've stopped there and considered it fate to raise one child. But the Edwards always knew that they were on a spiritual path.

"I just felt like it was meant for me to go through pregnancy and to bring a child into our family," Sonja said. "We thought we would try it again. [Doctors] said wait five years and let technology advance, let it catch up."

And so they did.

Sonja and Davey endured a third and then a fourth round of IVF after years of waiting. Again, it didn't work.

Then, one of their doctors who had just returned from a conference suggested a different kind of adoption: embryo adoption.

"The world wasn't ready for what we were doing," Sonja said.

Willing to try anything, the Edwards were soon off to The National Embryo Donation Center in Tennessee to meet with doctors and learn more about their options.

"You have to go through the whole process. We had to have a home study, they ran our background and our family history, even your education level," Sonja said of the embryo adoption process. "Some people put requirements on [the embryos] like they [were] them to go to a Christian home, and some people say they want them not to live in [the same] state."

The Edwards adopted embryos that were donated anonymously by a woman who went through IVF. She delivered three babies but had nine leftover embryos that she didn't want to discard.

Doctors thawed and transferred two of the donated embryos to Sonja.

"So I was pregnant with twins... one of them was late getting the heart beat," Sonja said as her voice trailed off.

She lost one of the babies.

While she was already a mother to Ryan, Sonja experienced pregnancy for the first time.

"You appreciate each moment that you have because you know how precious life is," Sonja said with tears in her eyes.

"His very first picture is this on transfer day," Sonja said, flipping through an album of memorabilia collected from the moment she found out that she was pregnant.

"You get to see the progression from embryo to birth," Davey said, "And that's something that a lot of us don't see."

Doctors considered Sonja high-risk because of her age.

"By this time, I'm 40, and I didn't want to do it more than one more time," Sonja recalled. "So they transferred two [embryos]. And we have Bryn. We used all nine [embryos], and we have two boys."

Davin is now 8 years old and Bryn is four. Both biological brothers are perfectly healthy.

"You can't really tell them apart," Davey said. "They're technically twins because they were conceived at the same time just born on different dates."

"You throw away the idea of health, money and whether your family will accept it or not and just go with it," Davey said.

Acceptance -- especially in their conservative hometown of Decatur -- was split.

"And that's fine," Sonja acknowledged. "I understand their point that you're playing with science in a way. But then at the same time when I look at my boys, if you say that we played with science, we have life out of it."

"God put things in our path that made it work," Davey said, his faith restored. "This is not random. There's a higher being that puts it all together. And it's all in perfect time."