When salons reopen, here's what you need to know | Q&A with Texas Department of Licensing and Regulation

The governor’s office will allow salons and barbershops to reopen with suggested COVID-19 guidelines. The suggestions are not enforceable by the state. 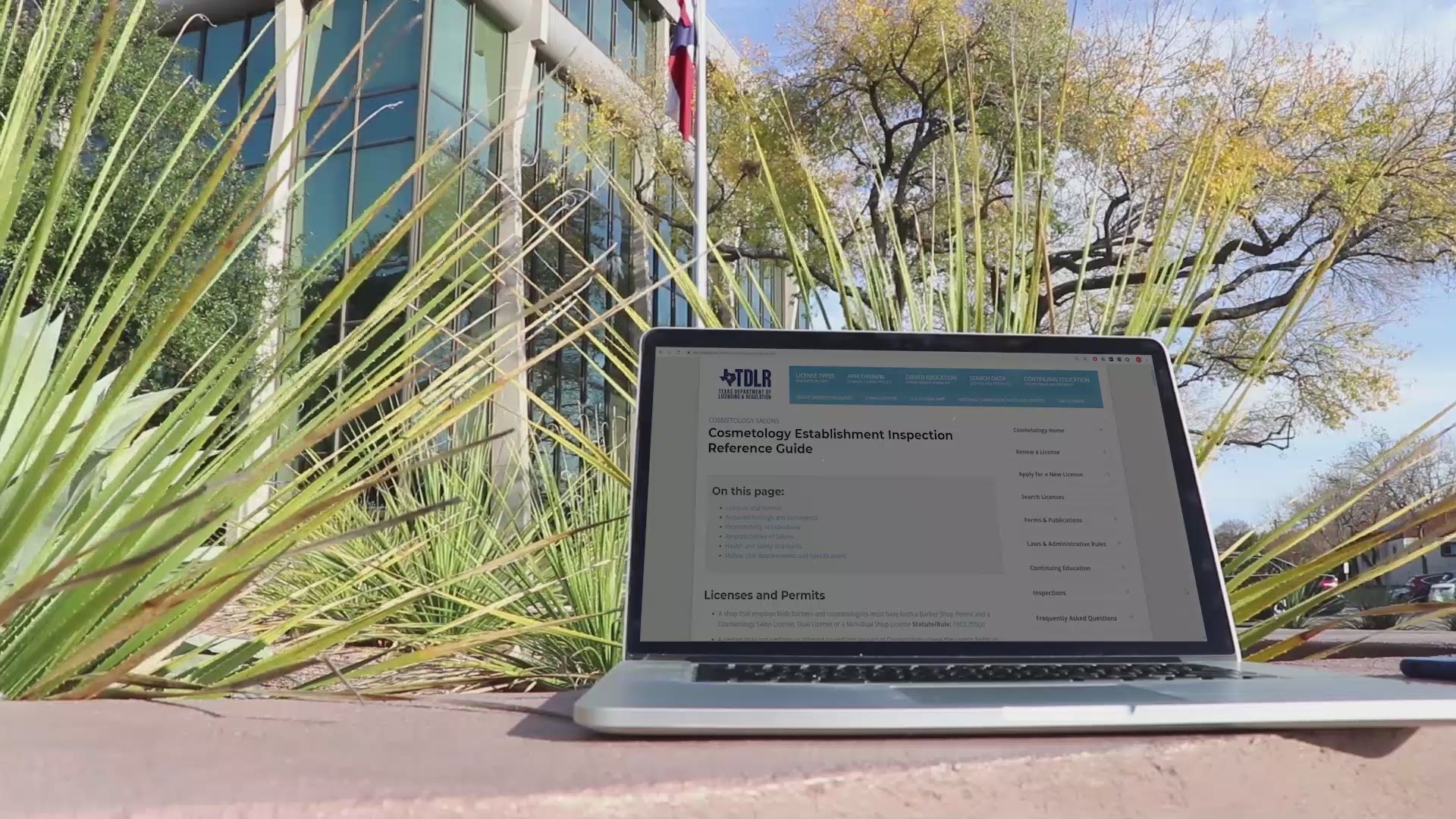 AUSTIN, Texas — Salons, barbershops and their workers are all regulated by Texas Department of Licensing and Regulation.

Texas COVID-19 guidance shows how the business should operate, such as screening employees and customers for symptoms, wearing masks and disposable supplies.

This came after Gov. Greg Abbott expressed health concerns about a week prior.

“The doctors' advice was, simply, it’s not safe enough to open at this particular time. ... My hope is that they will open on or no later than mid-May,” said Abbott in a press conference on April 27.

Proffer: What sort of communication did TDLR have with the governor’s office prior to the new order?

Tela Mange, spokesperson for TDLR: “From the beginning, we have been in regular communication with the governor's office about best practices for our licensees.

Since the closures started back in March and even before then, we were looking at other states and seeing what other states were doing. Part of our normal business practice is to look at best practices across the United States, see what other people are doing, what other licensing organizations are doing. We did that, and we've been communicating with the governor's office throughout this whole period, providing them with information that we thought would be helpful to them and to the strike force when they were considering whether to reopen

One of our employees here at TDLR works very closely with someone in the governor's office. They were in near-constant contact every day talking about all the 39 different programs that we have at TDLR, these closures and how the stay-at-home orders might be affecting them.”

RELATED: Checklist: Hair salons, barbershops, nail salons and cosmetology salons can reopen May 8 with these guidelines

Proffer: People on Facebook say it’s not enough time from the announcement to when they can open. Could guidance have been issued earlier so they could prepare?

Mange: “Licensees are not required to open on this date. If they need more time to prepare, they are free to delay their reopening.

Proffer: What happened to waiting to open in mid-May?

Mange: “The governor's office was in consultation with the medical community with their strike force. We were communicating with them best practices that we were learning from other states that had opened. They, in consultation with each other, determined that it was appropriate for that opening to happen earlier than expected.”

Proffer: When was TDLR notified that salons and such will open sooner?

Mange: “TDLR was notified of the governor's new order at the same time as the general public. We were pleased for our licensees that they would be able to open sooner than they had expected.”

Proffer: Did it catch you guys off guard?

Mange: “We knew that was coming at some point, and we're pleased for our licensees that they were having an opportunity to open sooner than they had thought might happen.”

Erica Proffer: What happens if someone doesn’t follow the guidance?

Mange: “They will be putting their employees and customers at unnecessary risk of spreading or contracting COVID-19. If, when our inspectors go back to their usual routine, if they see a violation of TDLR rules or of laws, they'll do a violation. If they see something that's a violation of the guidelines, then they'll just say, 'Hey, you might want to make sure that you're doing this that you're that it's recommended that you do.' It’s for the safety of everyone, both the stylists, folks in the barbershops and their guests.”

Proffer: So, if you break these, you won’t get fined or anything?

Mange: “The portion of the guidelines that are built on top of what barbers and cosmetologists are already required to do, which is pretty stringent as far as sanitation and cleanliness, then no, they wouldn't be fined for that.”

Proffer: How much of this is built upon that as far as when you look at this guidance, how much of it is new from what they are already doing?

Mange: “Most all of it should seem very familiar to our licensees.

We’re not requiring them to purchase anything new. It's suggested that they use masks, that they wear masks and that their clients wear masks as well. It's suggested to not let clients bring extra folks with them to appointments. It’s to reduce the number of people that are in the salon or in the barbershop. They are asked to not have people waiting inside. Take away the magazines.

Anything that could provide additional places for the virus to land on and hang out. We're asking them to remove. Most of it is sanitation. Things that they should be doing already.”

Proffer: Part of the guidance says “be mindful of employment, disability laws, workplace safety standards and accessibility standards”... What is that intended to do? Is there a certain thing people need to consider?

Mange: “This is intended to remind people that other laws that apply to their establishment are still in effect.

Proffer: What about supplies? On the TDLR Facebook page, a lot of folks are talking about how they don’t have enough cleaning supplies. Can the state do anything about that? The state cannot provide cleaning supplies to its licensees.

Mange: “That's something that they're going to need to sort out for themselves.

The fact that they're allowed to open on May 8 does not require them to open. If they don't feel like they can safely open without some of the additional equipment and supplies, then they should not open.”

Proffer: The guidance suggests disinfectants come from the EPA list, but a lot of that is sold out. What should they do?

For disinfecting their equipment, they already have things that meet these EPA requirements. So, they should use those. If there's something that is on the list that they feel is very important to them and that they should not open without that, then they shouldn't.”

Proffer: Who do people call or notify if they see any violations?

Mange: “People should call local law enforcement to report any violations of the governor's order, they may also file a complaint with TDLR.”

Proffer: And because these aren't actual enforceable guidelines as far as fines in any sort of enforcement actions, if they complain about something that doesn't fall within the rules, will TDLR do anything about it?

When the inspectors are going around and see something happening that is not a rules violation where the salon would be cited, they will take [salon owners] aside and say this is part of the best practices because it's safer for everyone involved.”

Proffer: Do you know when other TDLR-licensed businesses will open, such as massage therapists and estheticians?

Mange: “TDLR does not have additional information with regard to the reopening of massage therapy licensees. Estheticians are allowed to open May 8 under the provisions applicable to cosmetologists.

Proffer: Other states suggest avoiding the hair blower. Was that considered?

Mange: “We looked at states that had opened and presented to the governor's office what we thought was appropriate. Even when we are not in the middle of a pandemic, we’re constantly looking for best practices that would allow us to help our licensees.

That was something that we'd mention … but there were a number of other states that were not including it as well.”

Proffer: So, they were the ones that made that decision? Will you be changing your inspection requirements?

On our TDLR COVID-19 page, there are guidelines for the salons and the barbershops and nail salons. There are also guidelines for customers. If you are thinking in the next few days that you're going to go get your hair done or you want to get your nails done, then you might want to go on our website and see what the strike force has recommended for both the salons, the licensees and their clients.

Once you look at the guidelines that have been suggested for the salons and barbershops and look at what's been suggested for the clients, if you don't feel comfortable, then you shouldn't go in. I think most of our licensees are really anxious to get back to work, from what I've heard. Many of them will be following the guidelines that are set up for the safety of both the cosmetologists and barbers and for their clients.”

Mange: “I think sometimes our licensees and members of the public are not really sure what TDLR does. In situations like this, our job is to go out and find the best practices that will ensure the safety and health of both our licensees and their clients and to make sure that everyone is as safe as possible. We are proud of our employees who have all been working through this shutdown period, continuing to put out the licenses and answer questions that our licensees have and to keep the home fires burning for everybody so that we're ready to go. Once everyone has the go-back-to-work order.”

Q&A with Austin Mayor Steve Adler on reopening of barbershops, salons and pools

Checklist: Gyms can reopen in Texas, but must follow these guidelines