Judge Clay Jenkins said in a tweet that Fair Park would be closed Saturday through Monday, but that officials would monitoring conditions to decide when to reopen. 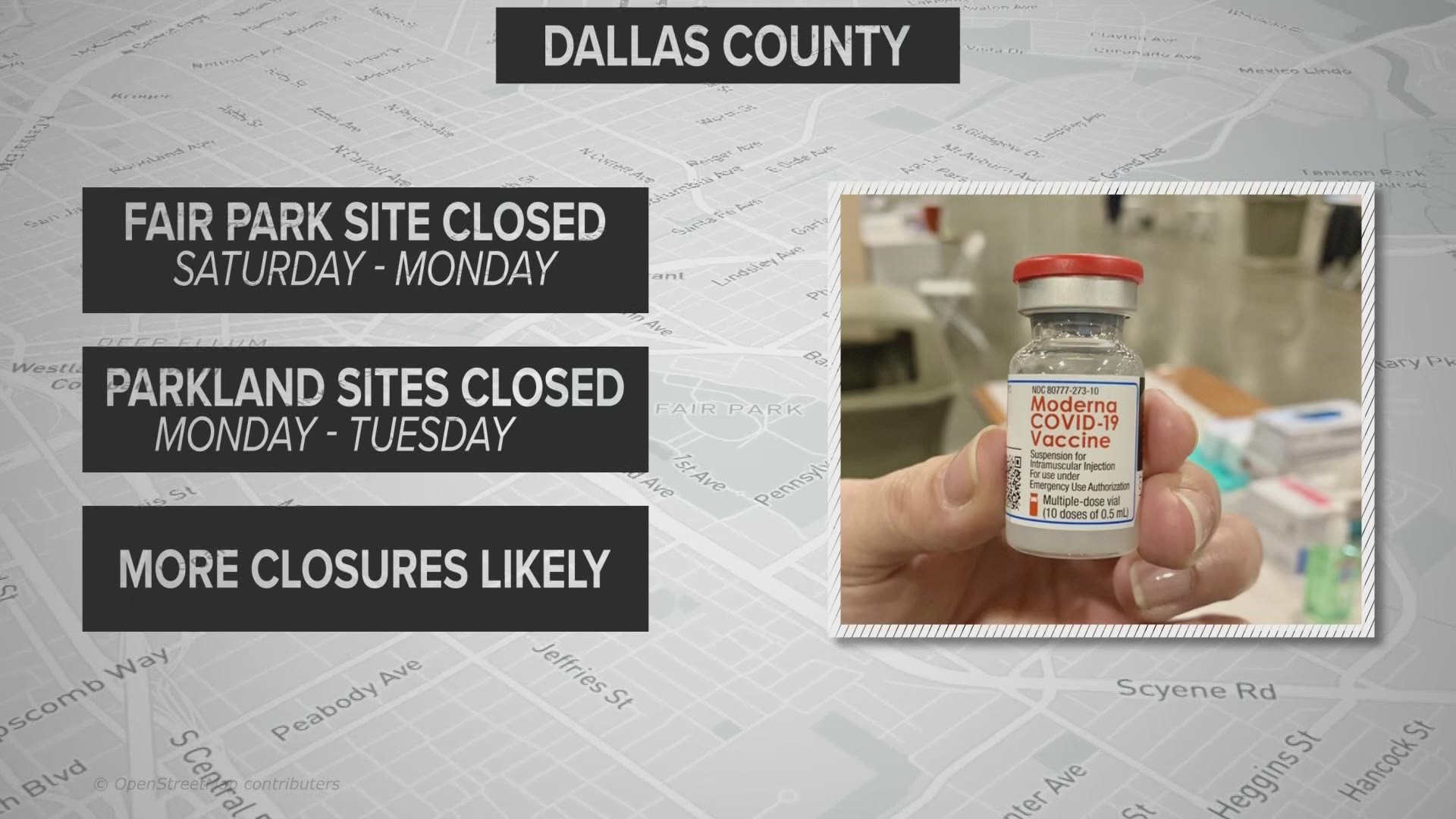 Updated at 9:50 p.m. with information about Denton, Collin counties.

With cold temperatures and wintry precipitation forecasted to hit North Texas over the next few days, local officials are evaluating their vaccine operations.

Officials said Friday the vaccination distribution plans for the next few days could change based on the weather. Here’s what we know so far about the plans for Fair Park and Arlington E-Sports Stadium, heading into the weekend:

Vaccinations began around noon. Dallas County Judge Clay Jenkins said they are only administering second shots to those who were due to get their second shots Monday to Thursday of this week.

Operations were moved inside Friday. Earlier this week, Dallas County officials told WFAA it’s difficult to keep the vaccine at a stable temperature once thawed, while standing outside for drive-thru operations.

On Friday, Jenkins said there are “heated buses to take you to the building from your car."

“If your day was (Saturday to get the vaccine), and we’re not open (Saturday), and we’re able to open again some time next week, you’ll be the first ones to get in,” Jenkins said.

Jenkins tweeted Friday afternoon that the site, which was originally going to be open Sunday, is now going to be closed.

"We understand this is a frustrating situation for many who were hoping to receive their second dose of the vaccine on their scheduled date," Jenkins tweeted. "With expected extreme weather conditions, including dangerously low temperatures and hazardous roadways, we must prioritize people’s safety."

Fair Park is closed "due to weather."

NEXT WEEK: TO BE DETERMINED

Jenkins said the forecast appears to be favorable next Friday and Saturday. But plans for the middle of the week are still up in the air.

“We’ll just have to wait and see about Tuesday through Thursday,” Jenkins told WFAA. “If the weather is not safe for seniors to drive on it – doesn’t matter whether we’re (giving shots) inside or outside (at Fair Park) – we won’t be open because I’m not going to have people get into a dangerous car wreck to get here.”

Vaccines were administered from 9 a.m. to 4 p.m. Friday.

As of right now, Fegan said the plan is to give people their second doses, weather-permitting.

AFD will send notifications to everybody involved.

No vaccine clinics are scheduled in the early part of the week, including Texas Motor Speedway. Officials will monitor weather and will consider reopening clinics Friday or Saturday.

Appointments at the large Plano site at John Clark Stadium will be cancelled Monday and Tuesday. Appointments will be rescheduled when the weather cooperates

The other smaller sites are basing decisions on weather and how much vaccine state allocates to them.

*These are latest updates provided to WFAA from each county as of Friday, Feb. 12. and will be subject to change. Please refer to your county's public health page for immediate changes and updates.