The governor began the state party convention Thursday by addressing head-on the growing discontent with his orders to contain the pandemic. 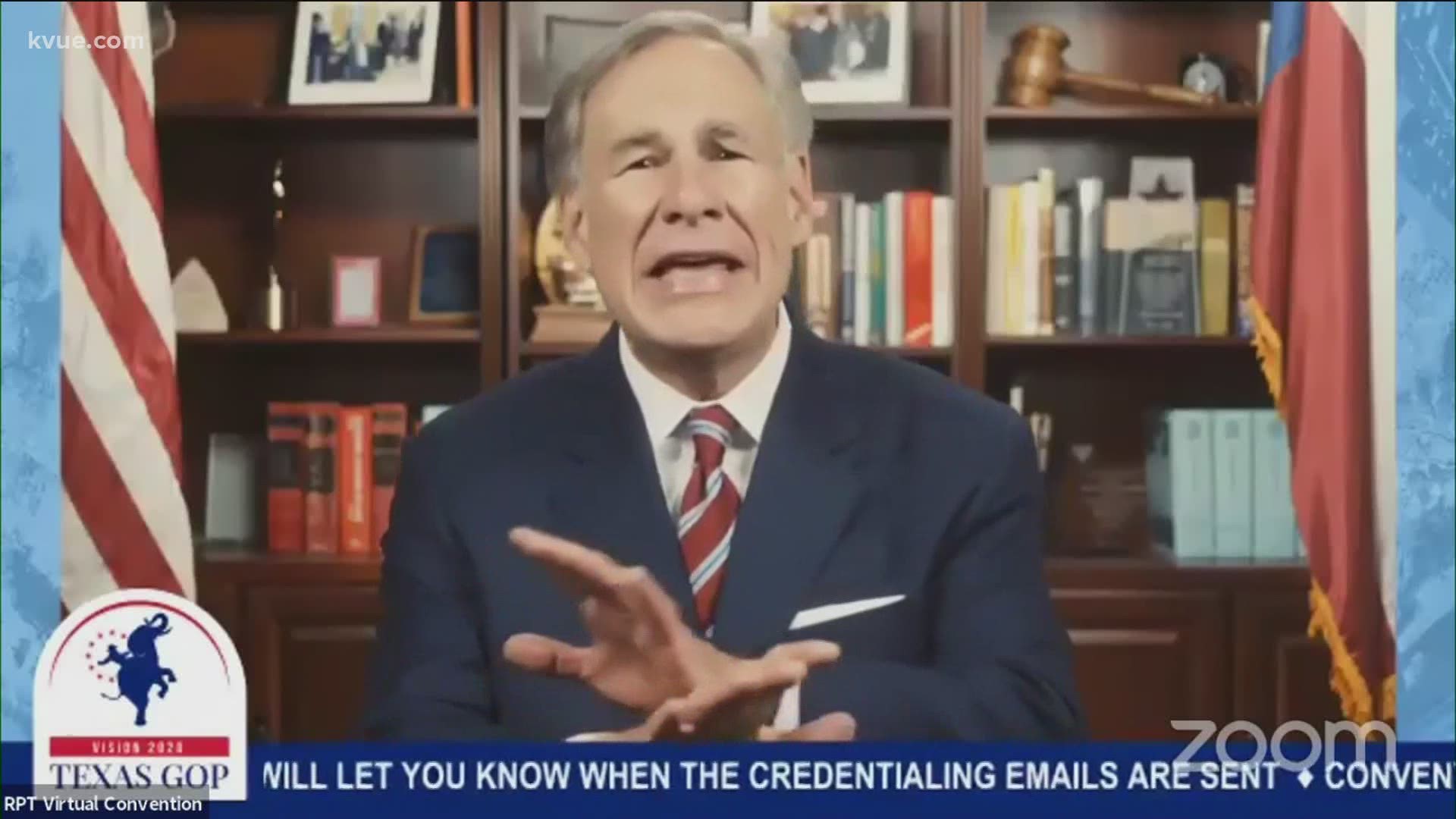 HOUSTON — (The Texas Tribune) Gov. Greg Abbott on Thursday delivered a firm defense of his coronavirus response to delegates at the Texas GOP convention who even he acknowledged have grown agitated with him.

Abbott addressed the discontent head-on as the virtual convention got underway Thursday afternoon, starting with the statewide mask requirement that he issued earlier this month. Since then, several Republican county leaders, including in some of the state's biggest red counties, have voted to censure the governor.

"Actually the next to the last," Abbott added. "The last thing that any of us want is to lock Texas back down again."

Coronavirus has surged in recent weeks across the state, and Abbott sought to impress upon the delegates how dire the situation has become.

"Each day the facts get worse," he said. "If we don't slow this disease quickly, our hospitals will get overrun, and I fear it will even inflict some of the people that I'm talking to right now."

In addition to criticism of his mask order, Abbott has faced growing resistance from within his own party to his use of executive power in general. Abbott also tackled that critique in his address to delegates.

"I will never abandon the Constitution," Abbott continued, "and I haven't here."

'Nobody knows what the hell is going on': Popovich levels criticism at Texas state leadership amid coronavirus crisis

To support his case, Abbott said there was a recent ruling by the conservative 5th U.S. Circuit Court of Appeals — written by a judge appointed by President Donald Trump — that "upheld the constitutionality of my executive order authority." Abbott appeared to be referring to an early April ruling that let Texas enforce a ban on almost all abortions amid the pandemic, part of a broader order by Abbott to cancel elective surgeries and free up hospital space.

Abbott then acknowledged to delegates that they may have some differences — but "there is so much that we agree on," urging unity to reelect Trump and defeat presumptive Democratic nominee Joe Biden.

The state GOP convention is being held online through Saturday. The party moved forward with the virtual format earlier this week after losing a legal battle to hold it in person in Houston as originally planned.

Abbott's handling of the pandemic has come under increasing scrutiny — from both sides — as the coronavirus has spiked in Texas. He issued the statewide mask requirement after banning local officials from instituting such mandates earlier in the pandemic. He later allowed local governments to require businesses to mandate mask-wearing by customers and employees.

This article originally appeared in The Texas Tribune.