More than 2.5 million households in Texas didn't always have enough food to eat in November, the U.S. Census Bureau reports. About two-thirds were Hispanic or Black. 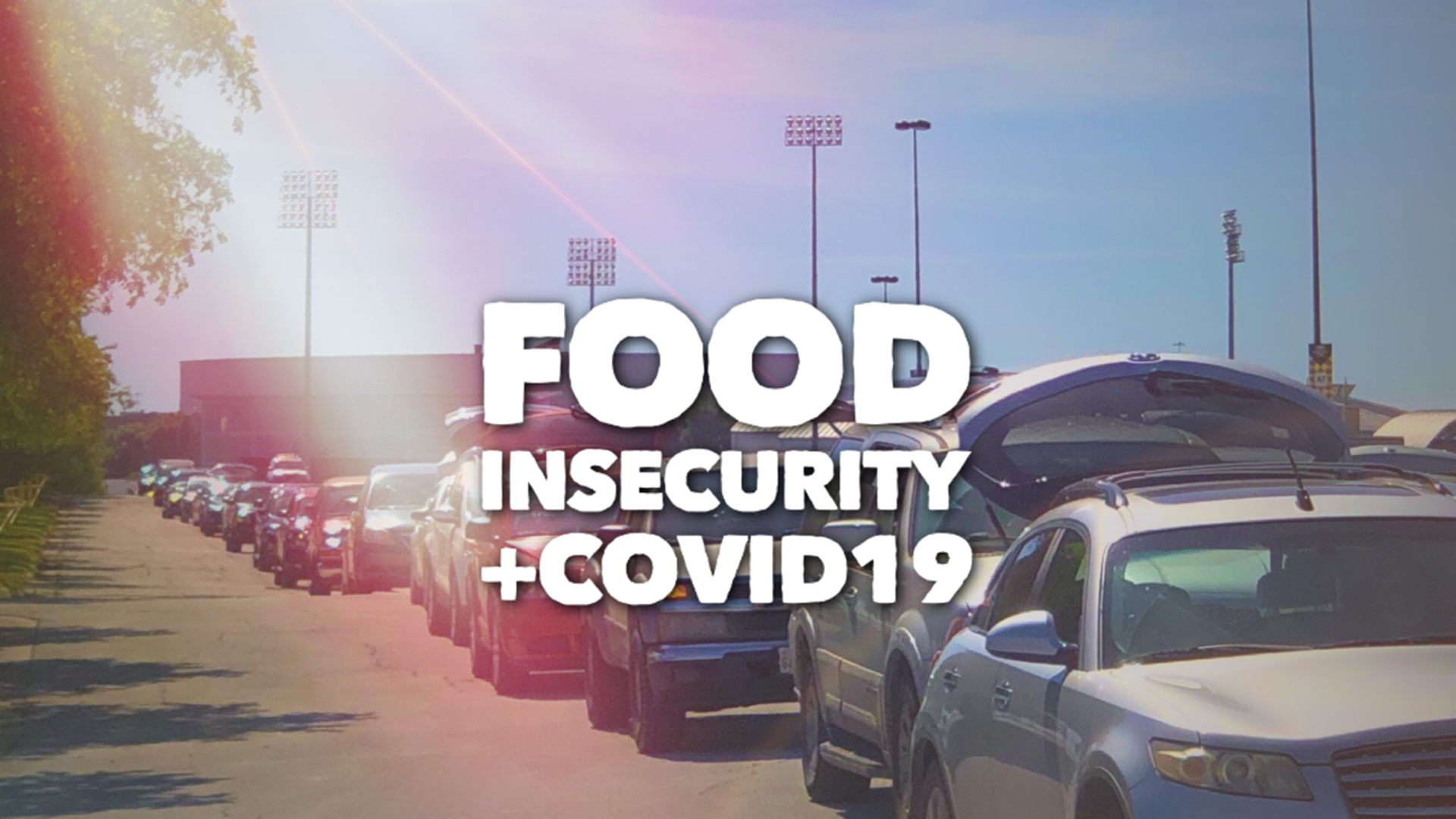 Food banks across Texas are projecting food shortages in coming months due to the end of three key federal and state programs that have helped them respond to high demand during the coronavirus pandemic and its accompanying recession.

“Food insecurity is twice as high as before the pandemic. We’ve had a lot of federal aid and that’s all going away at the end of the year,” said Celia Cole, CEO of Feeding Texas, which coordinates the 21 food banks in the state. “We are facing a kind of a food cliff and we are worried of how long we are going to be able to keep up with demand without the help of the federal government.”

According to a November survey by the U.S. Census Bureau, more than 2.5 million households in Texas either sometimes or often did not have enough food to eat in the week prior to the poll. And 66% of these households were either Hispanic or Black.

The worries about a looming food shortage come as two main unemployment programs that significantly expand jobless assistance — and a federal moratorium on evictions — are set to expire at the end of December. If Congress doesn’t act on another pandemic stimulus package, many Texans will lose at least some of their unemployment benefits.

More than 3.8 million Texans have applied for unemployment benefits since March, but the outdated and understaffed unemployment insurance office left countless Texans frustrated as they try to navigate a confusing system for getting aid.

It also comes as Texas faces another major surge in coronavirus infections.

Feeding Texas is currently gathering data from food banks across the state, and Cole is concerned by what she is hearing so far. The Houston Food Bank, the largest in Texas, estimates that in the next three to six months it will need to distribute 20 million pounds of food monthly, but that they will be 5 million short. In El Paso, an area that is currently experiencing a devastating outbreak of COVID-19 cases, the gap could be 11 million pounds of food each month.

“We are seeing a different population, lots of people that have never come to a food bank before, people that didn't have the assets to weather a period of unemployment,” Cole said.

One of them is Quinn Smoot, a 32-year-old resident of West Houston. Before the pandemic, Smoot and their partner would even donate to the food pantry from time to time.

“I never thought I would ever have to go to the food pantry,” Smoot said. “We were financially set.”

But their income quickly dropped as they lost work hours and had to juggle mental health issues and taking care of their 9 year old, who has autism. Currently, Smoot has managed to find a stable job as technical support for a telecommunications company, but if they don’t have access to food from their local pantry, they know they will have a hard time getting back on their feet.

“We are still behind on things. I’m behind on rent, behind on my home internet, which I rely on to work. I’ve been sick with no health insurance,” Smoot said. “Fresh food is super expensive here in the neighborhood, but there I can get apples, potatoes and not just canned and processed food.”

The main federal program that is ending provided around $100 million dollars in food to Texas food banks in 2020, according to Feeding Texas calculations. The Food Purchase and Distribution Program was created to help farmers affected by the trade war between President Donald Trump's administration and China and Europe. This ended up helping hunger organizations, as the food bought by the U.S. Department of Agriculture from these farmers ended up being distributed to food banks across the country.

“We knew that this would last two years, but we didn't know that we would have a pandemic,” said Valerie Hawthorne, government relations director of the North Texas Food Bank, where the end of the program will mean 17 million fewer pounds of food for next year. “Farmers are still struggling and we are not sure of what will happen to that food. All we know is that we won’t be receiving it.”

Funding for this program ended in September, but food banks are receiving some of the groceries bought with these funds into December.

Another USDA initiative that is ending is the Farmers to Families Food Box program, which was part of the Trump administration’s response to the pandemic. According to the USDA, this program provided more than 124 million food boxes worth close to $4 billion nationwide.

“This was the icing on the cake, but it was a huge icing,” Hawthorne said.

This program was only funded until December of this year and it hasn't been renewed for 2021.

Texas food banks are also concerned by a 40% cut in funding of a Texas Department of Agriculture program that buys surplus produce from farmers — fruits and vegetables that are of good quality but don’t fill the standards of major retail stores — and distributes it to food banks.

“There’s millions of pounds of this surplus,” said Brian Greene, president and CEO of the Houston Food Bank. “Between that and the major cuts from federal programs, we are looking for a real problem as we get to December and especially when we go into January.”

TDA spokesperson Mark Loeffler said that the agency “essentially did not have a choice” after Gov. Greg Abbott and the Legislative Budget Board asked for a 5% cut to the state's general revenue spending.

“Because TDA is almost entirely a cost recovery agency (meaning programs are funded by fees collected within that program) we have very little ... to cut,” said Loeffler in an email. “Consequently, the only place TDA can usually cut ... is in the grants that are appropriated to us by the Legislature.”

Loeffler also added that these cuts are not final and that the agency asked the Legislature to restore these grants during next year’s legislative session.

Cole, from Feeding Texans, said that restoring these funds and preventing future cuts will be their main priority during the 2021 legislative session. But local food banks are also pushing for an increase in donations.

“You look at the pedals you can control and see how hard you can push them. We are trying to add significantly to our produce budget and fundraise for that,” Greene said. “Our other problem is laborers.”

Due to COVID-19, food banks have lost volunteers, but have also had to decrease the capacity of their working areas. In the Houston Food Bank, they used to have up to 1,000 workers at a time in their workrooms. Now they only allow 150.

“But then the bigger issue is filing the shifts because there’s so much reluctance to volunteer,” Greene said. “We’ve been making up for that by hiring laid-off hospitality people, but then the funds to do that expire at the end of December, so we are trying to raise money to keep that going.”

Food banks are also calling for stronger promotion of the Supplemental Nutrition Assistance Program. According to USDA data from 2017, Texas ranked as the state with the eighth lowest participation on these benefits.

“We knew before COVID that more needed to be done to connect people with SNAP and that Texas was one of those places where this was the case,” said Ellen Vollinger, legal director of Food Research & Action Center. “If more people are connected to SNAP, it’s not only good for them in terms of health and well-being, but it would be good for the economy.”

Vollinger said that this benefit is a fast solution for people that suddenly lose income and that it also quickly injects money into the economy. According to the USDA, for each dollar spent in this program, the gross domestic product increases between 80 cents and $1.50.

“Our message to this administration is please use all the tools in the toolbox,” Vollinger said. “The food banks are stepping up. Government needs to step up just as high.”

Disclosure: Apple and Feeding Texas have been financial supporters of The Texas Tribune, a nonprofit, nonpartisan news organization that is funded in part by donations from members, foundations and corporate sponsors. Financial supporters play no role in the Tribune's journalism. Find a complete list of them here.