As bigger facilities are filling up, doctors, nurses and hospitals in the Texas Panhandle are saying it’s difficult to find beds for patients who need them. 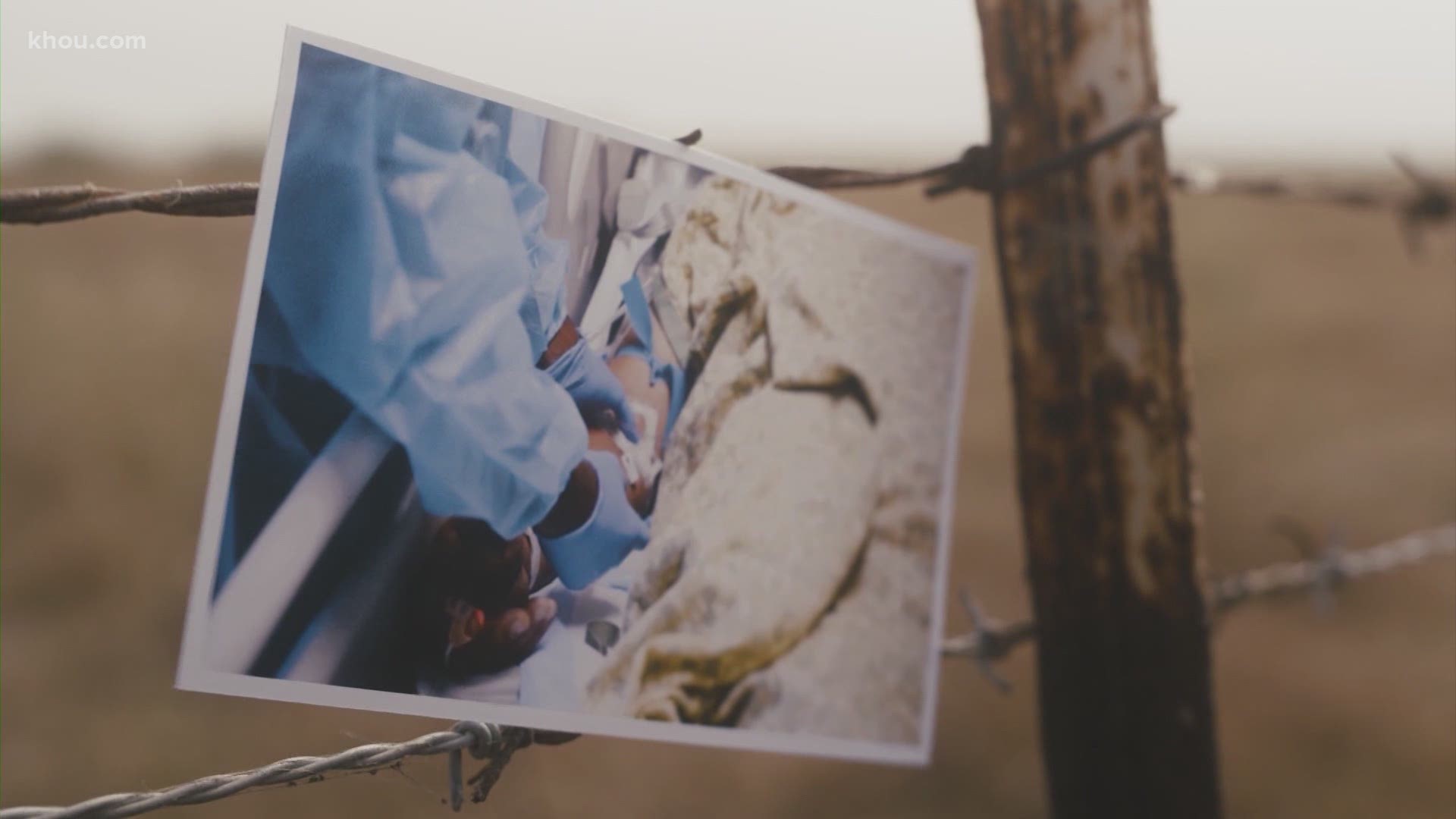 HOUSTON — Hansford Hospital in Spearman, Texas, is about 90 miles northeast of Amarillo. The rural hospital serves about 5,500 people. Before COVID-19, it had 14 beds and no ICU. Recently, the facility was able to add beds for COVID-19 patients and bring up the bed number to 28.

Before the expansion, on the day KHOU 11 spoke to the hospital staff, 13 of the 14 beds were filled with COVID-19 patients. The hospital’s Facebook page updates the community of the most recent numbers. They vary.

But if a rural hospital like Hansford needs critical, surgical or ICU care, it transfers patients to larger facilities in the area, often Lubbock or Amarillo.

Typically, it takes one call to get a transfer secured. Sometimes it’s automatic.

In the last two months, Blythe Boyd, Hansford’s Chief Nursing Officer, said she’s had to send one patient to Denver and made 45 phone calls to place a COVID-19 patient who needed ICU.

“We started calling before we decided to intubate her, and it took about 45 phone calls,” Boyd said. “I called three different states. I called San Antonio, Houston, Dallas. I called Midland twice. I called Oklahoma City, I called Colorado. Nobody had any beds for ICU beds for COVID-19 patients at that time.”

Boyd said the patient ended up going to Midland, because that hospital called back since someone was just discharged.

“Forty-five is an ungodly number,” Boyd said. "That’s not anything I would have ever imagined that we would have to do to transfer a patient that needed critical care.”

She said the patient who was sent to Denver waited for almost 12 hours for their transfer while on a ventilator in Hansford’s emergency room. The weather wasn’t clear enough to fly.

“My biggest fear would be, not even those COVID patients, but some of those just sick patients not being able to get them out of here. And then when we do, it may be too late,” Boyd said.

“When she told me she made 45 phone calls, it just kind of blew my mind,” said Jonathan Bailey, Boyd’s boss and the CEO of the Hansford County Hospital District. The hospital is a part of the district, which also operates a 74-bed nursing home, rural health clinic, pharmacy and home health. Recently, some of the nursing home beds have been converted into COVID beds, according to Bailey.

“It’s certainly alarming and scary situation right now,” Bailey said. “We've been sharing stuff on our Facebook page, you know, warning folks that we're starting to see a trend that hospitals that we refer to and transfer to are filling up. And at some point, they're going to get too full to accept patients. And we're where we're at that point. We've passed that point.”

“While we are seeing larger number of patients in our clinics and hospitals and are at some points overwhelmed, we are still providing care and treating patients," Bailey said.

Bailey said the COVID-19 numbers they’re seeing are not even the full picture of an already bad situation.

“We’re seeing a 41 to 42 percent positivity rate,” he said, “which is an extremely high number. Those are just the ones we're catching, which is probably double that out there that we're not seeing or that aren't coming to clinic or aren't getting tested.”

Three million Texans live in rural areas. They rely on a shrinking number of community hospitals and on larger medical centers like ones in Lubbock for more advanced care. That’s where Dr. Sharmila Dissanaike, a trauma, burn, critical care surgeon can help.

Dr. Dissanaike wears many hats. She’s the Chair of Surgery at Texas Tech University Health Sciences Center and a member of the Advisory Council for Rural Surgery with the American College of Surgeons.

But Dr. Dissanaike can’t help, if her hospital is not accepting transfers.

“I'm sitting there, and I might be just one hour away, actually,” Dr. Dissanaike said. “And yet if my hospital doesn't have beds, then that patient doesn't get into my hospital.”

Dr. Dissanaike said her colleagues in smaller hospitals in the region have been describing the struggles they’ve had with transferring patients with heart attacks, or a bowel obstruction; finding a hospital with a surgeon has been a problem, she said.

“We get a list in my hospital of all the patients who we've had to deny transfers to, lately that list has grown to where it's ridiculous,” she said.

UMC Health System in Lubbock is one of the hospitals where Dr. Dissaniake has operating privileges. It’s a Level I Trauma Center, meaning it has the ability to provide care for any injury or issue. The Lubbock facility serves a population in a 250 square mile area.

Friday, the hospital spokesperson told KHOU 11 that in the last month to six weeks, the hospital has been denying more transfer patients than accepting, this included people sick with COVID or needing other medical services.

“And the domino effect worries me probably the most. I know that heart attacks and appendicitis are not going away with COVID, they're still there. And it really concerns me that we're in a situation where people can have serious health consequences, maybe even deaths from some basic medical and surgical problems that haven't been deadly in this country for 50 years,” she said.

Dr. Dissanaike said if the current trend continued, she was concerned more people will die of treatable diseases, than will die of COVID-19.

“You may die of appendicitis this Christmas, because there's not going to be any place to treat you,” she said.

Texas is split into 22 trauma service areas. Each has a Regional Advisory Council, a group of local leaders responsible for trauma system oversight in each of their areas, which include multiple counties. For example, these RACs have been working with Texas Division of Emergency Management, TDEM, to get supplies, including personal protective equipment and other help to their local entities, including hospitals and funeral homes.

When you look at the state’s COVID-19 hospital capacity dashboard, you’ll see hospital statistics, like beds available, including ICU, lab-confirmed COVID-19 patients, total hospitalizations. They are broken down by Trauma Service Areas. These are the geographic areas that those RACs cover.

As of Dec. 3, Texas’ COVID-19 hospital capacity dashboard showed the state had hospital beds available. Two areas out of 22 had zero ICU beds.

The numbers varied by areas of the state, but overall, the dashboard numbers didn’t seem to reflect the picture a nurse, a hospital CEO and a trauma surgeon described to KHOU 11. Or the firsthand accounts of physicians working in local communities in Texas, who shared their experiences in writing with KHOU 11.

“It doesn’t matter what statistics you use. It doesn’t matter how many beds are on a dashboard,” Dr. Dissanaike said. “The bottom line is we cannot meet the needs of our communities right now.”

“We have to be careful not to just throw out numbers that give a false sense of security, because most people truthfully cannot understand what that actually means on the ground,” she added. “If you need a hospital bed, will you have one? Yes? No? That's the only question, in my opinion, that matters. And the answer to that across the United States right now is no.”

Texas Department of State Health Services says the dashboard numbers reflect what hospitals themselves report. In an email Friday, Chris Van Deusen, DSHS’ Director of Media Relations told KHOU 11 the state was aware of ICU bed shortage in some of the hardest hit areas, as well as of the challenges hospitals were experiencing finding facilities that will accept transfers.

He said DSHS has been taking various steps to help, including coordinating with the Texas Hospital Association that may represent larger hospitals, “to remind their members of the importance of accepting transfers and that it’s something they should be doing, if they have the space,” Van Deusen wrote. “We are encouraging larger hospitals to put in STARs (State of Texas Assistance Requests) for staff or hospital beds if they have the physical space to take more patients but just need those resources to accommodate transfers.”

John Henderson gets to hear all these stories directly from rural hospitals across Texas. He’s the President and CEO of TORCH, Texas Organization of Rural and Community Hospitals.

He said if we zoomed in on the state, especially in west and northwest Texas – that’s where the hospitals were struggling.

“More patients than they can take care of,” he said. “Everything around up through the south plains of Texas, like Lubbock, and the entire Texas panhandle, Amarillo in the surrounding communities.”

“There are individual rural hospitals spotted around Texas that have crossed that red line in terms of capacity, they just can’t take care of anymore,” Henderson said.

His member hospitals have told him they’ve sent Texas patients to Colorado, Arizona or Missouri.

“There's a prevailing attitude among some communities in Texas that they'd prefer to just have it and get on with it,” Henderson said. “That's not the way it works. And I fear the only thing that will get their attention is having a friend or relative or loved one go through it and experience it. But that's a hard way to learn the lesson.”

DSHS said it was working with TORCH as well, “to make sure their members have strong connections with their Hospital Preparedness Program providers. Those providers can help coordinate transfers if hospitals are having difficulty,” according to Van Deusen.