Pentagon to require COVID vaccine for all troops by mid-Sept.

The deadline for U.S. military members could be pushed up if the vaccine receives final FDA approval before then or infection rates continue to rise. 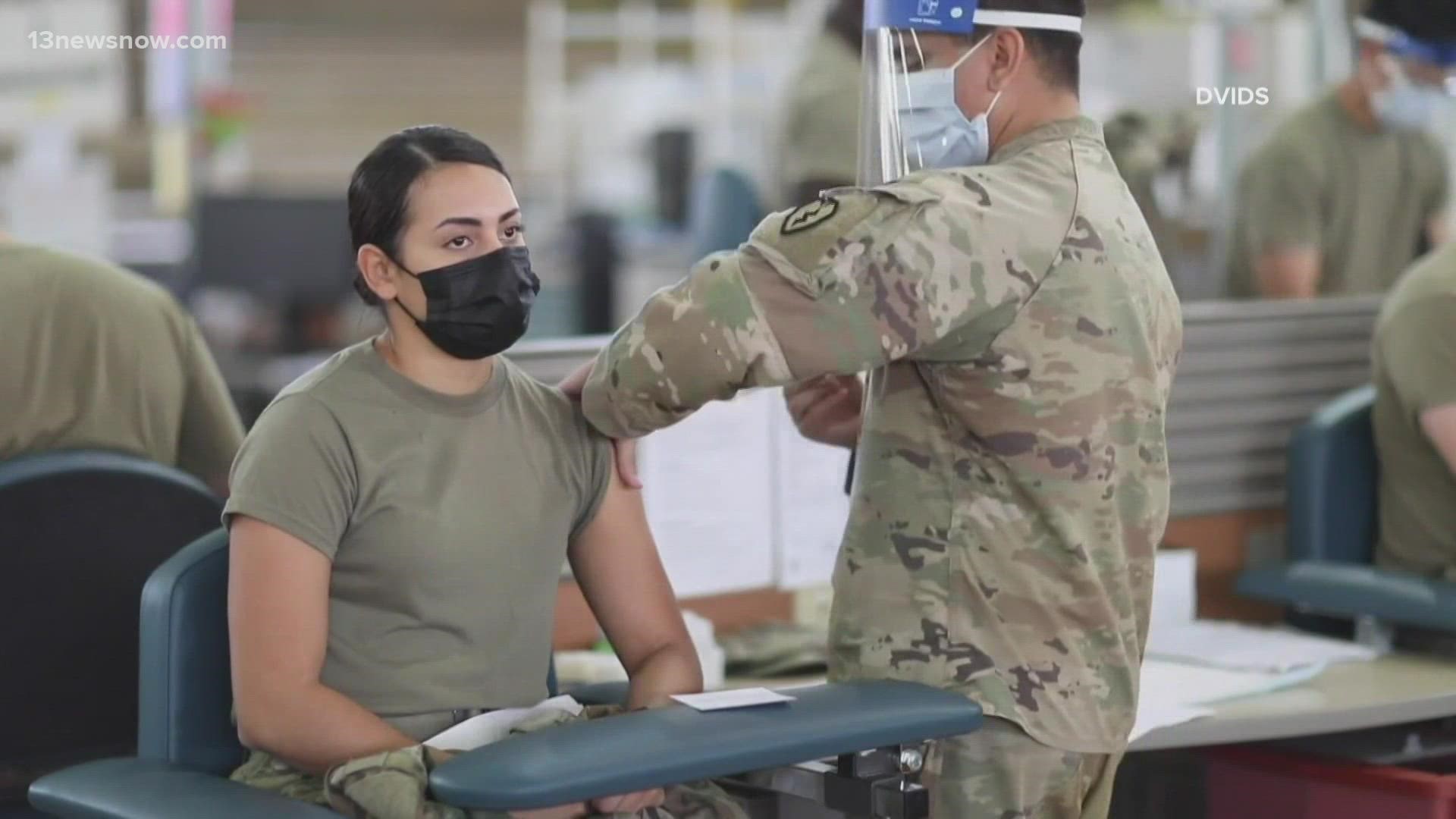 WASHINGTON — The Pentagon will require members of the U.S. military to get the COVID-19 vaccine by mid-Sept., according to a memo obtained, at least in parts, by multiple outlets. That deadline could be pushed up if the vaccine receives final FDA approval or infection rates continue to rise.

“I will seek the president’s approval to make the vaccines mandatory no later than mid-September, or immediately upon" licensure by the Food and Drug Administration "whichever comes first,” Defense Secretary Lloyd Austin says in the memo to troops, warning them to prepare for the requirement. "I will not hesitate to act sooner or recommend a different course to the President if l feel the need to do so.”

The memo is expected to go out Monday.

Austin's decision comes a bit more than a week after President Joe Biden told defense officials to develop a plan requiring troops to get shots as part of a broader campaign to increase vaccinations in the federal workforce. It reflects similar decisions by governments and companies around the world, as nations struggle with the highly contagious delta variant that has sent new U.S. cases, hospitalizations and deaths surging to heights not see since the peaks last winter.

Austin said in his memo says that the military services will have the next few weeks to prepare, determine how many vaccines they need, and how this mandate will be implemented. The additional time, however, also is a nod to the bitter political divisiveness over the vaccine and the knowledge that making it mandatory will likely trigger opposition from vaccine opponents across the state and federal governments, Congress and the American population.

It also provides time for the FDA to give final approval to the Pfizer vaccine, which is expected early next month. Without that formal approval, Austin would need a waiver from Biden to make the shots mandatory.

Troops often live and work closely together in barracks and on ships, increasing the risks of rapid spreading. And any large outbreak of the virus in the military could affect America's ability to defend itself in any national security crisis.

The decision will add the COVID-19 vaccine to a list of other inoculations that service members are already required to get. Depending on their location around the world, service members can get as many as 17 different vaccines.

Credit: AP
FILE - In this July 21, 2021 file photo, Defense Secretary Lloyd Austin speaks at a press briefing at the Pentagon in Washington.

Austin's memo also said that in the meantime, the Pentagon will comply with Biden's order for additional restrictions on any federal personnel who have not been vaccinated. Those restrictions will include wearing masks, social distancing and travel limits.

According to the Pentagon, more than 1 million troops are fully vaccinated and another 237,000 have received one shot. But the military services vary widely in their vaccination rates.

Military officials have said the pace of vaccines has been growing across the force, with some units — such as sailors deploying on a warship — seeing nearly 100% of their members get shots. But the totals drop off dramatically, including among the National Guard and Reserve, who are much more difficult to track.

Some unvaccinated service members have suggested they'd get the shot once it's required, but others are flatly opposed. Military officials have said that once the vaccine is mandated, a refusal could constitute failure to obey an order, and may be punishable under the Uniform Code of Military Justice.

Army guidance, for example, includes counseling soldiers to ensure they understand the purpose of the vaccine and the threat the disease poses. The Army also notes that if a soldier "fails to comply with a lawful order to receive a mandatory vaccine, and does not have an approved exemption, a commander may take appropriate disciplinary action.”

Military service officials have said they don't collect data on the number of troops who have refused other mandated vaccines, such as anthrax, hepatitis, chicken pox or flu shots over the past decade or more. And they weren't able to provide details on the punishments any service members received as a result of the refusal.

Officials said they believe the number of troops refusing other mandated vaccines is small. And the discipline could vary.

Also, service members can seek an exemption from any vaccine — either temporary or permanent — for a variety of reasons including health issues or religious beliefs. Regulations involving the other mandatory vaccines say, for example, that anyone who had a severe adverse reaction to the vaccine can be exempt, and those who are pregnant or have other conditions can postpone a shot.

Some have argued that those who have already had the virus — and have antibodies — are immune and thus should not have to get the shot. It's not clear how the military will act on those types of assertions.

According to defense officials, some senior military leaders have expressed support for making the vaccine mandatory believing it will help keep the force healthy. Military commanders have also struggled to separate vaccinated recruits from unvaccinated recruits during early portions of basic training across the services in order to prevent infections. So, for some, a mandate could make training and housing less complicated.

The other military services did not provide similar data.