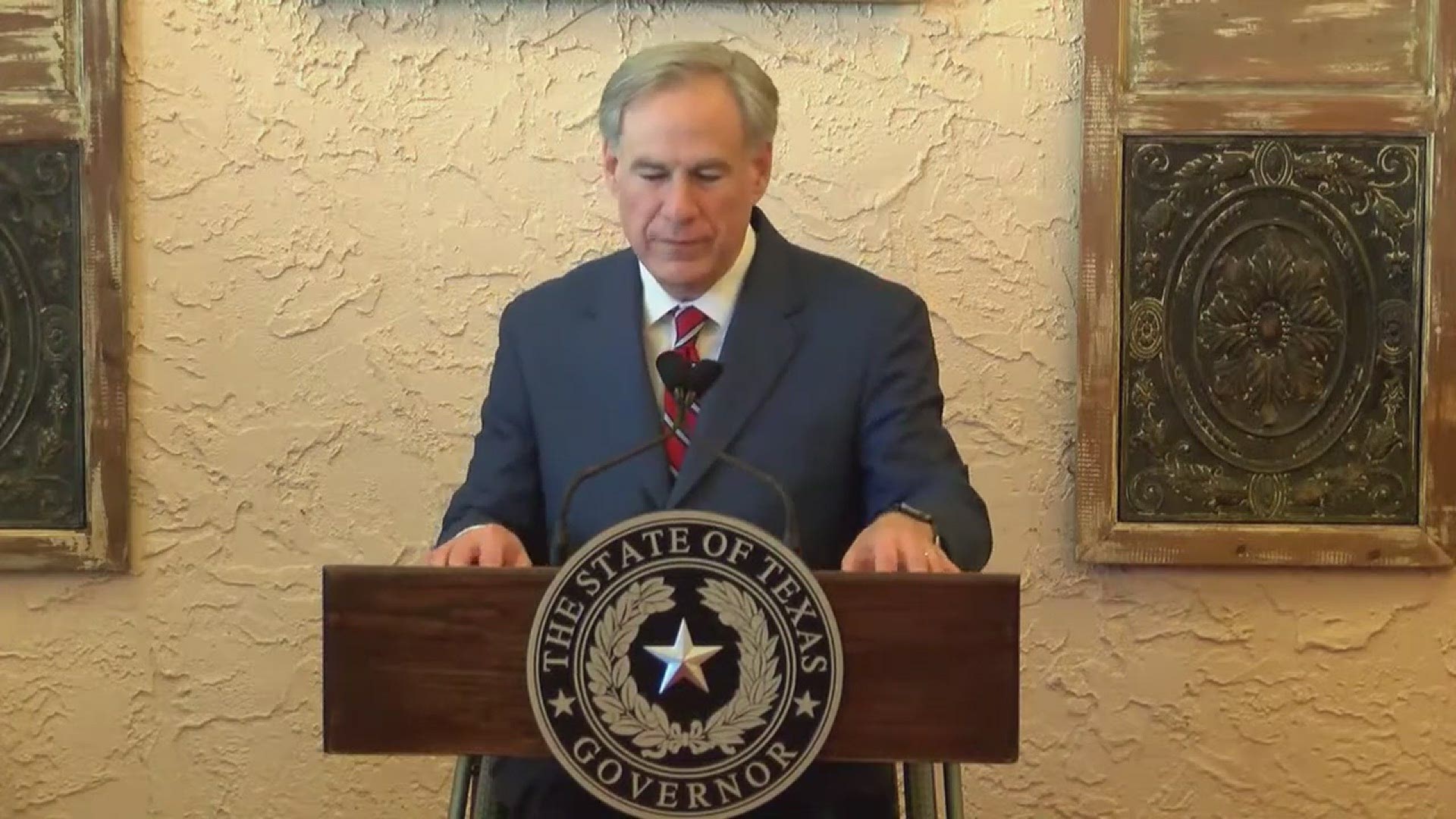 DALLAS — Local and state leaders across Texas had a lot to say about Gov. Greg Abbott's Tuesday announcement that he would rescind the statewide face mask order and lift most business restrictions starting next Wednesday, March 10.

In Tarrant County, leaders said they were lifting the local mask mandate for businesses following the governor's decision. And Denton County officials said they would follow Abbott's decision in allowing businesses to open at 100%.

Here are more reactions from state and local leaders:

Stephen Love, the president/CEO of the DFW Hospital Council, said that removing the mask mandate "is very unfortunate."

"The COVID-19 virus with variants is still here and we have not achieved herd immunity," Love said. "This decision will cause the community spread to increase, forcing our exhausted healthcare heroes to diagnose, treat and save the lives of newly infected patients."

"It's unfortunate that on a day we record 25 deaths, which takes us above 3,000 [COVID-19] deaths for Dallas County since COVID began nearly a year ago, the governor has removed all of the state orders that he designed to protect you and the people that you care about from contracting COVID," the judge said. "But for us here in North Texas, and for all Texans, we need to focus not on what the governor tells you the law allows, but on what doctors and the facts and the science that we all know well at this point tell us is necessary to keep us safe and give us our best chance of reaching herd immunity as quickly as possible."

RELATED: Enough COVID vaccine for every US adult by end of May, Biden says

Jenkins noted that while the county is receiving its first shipment of Johnson & Johnson today, he said only 7% of the entire county is fully vaccinated, and just 13.5% of the county has received a first shot of the vaccine.

"We need to continue to care for one another and to do the Texan thing of being friendly and recognizing that others are depending on us to keep them safe as well as ourselves safe...I think most Texans are spurred not by what the governor demands of them but just what a good neighbor does for one another, which is to protect each other during this time of a pandemic."

"The people of Dallas should continue to mask up and take precautions to slow COVID-19’s spread and mutations," he wrote in a news release. "We are getting closer to achieving herd immunity, and now is not the time to let down our guard. Vaccines, masks, and social distancing are the best tools we have for fighting this virus, which has claimed far too many lives in the last year.”

Denton County officials said they would follow the state guidelines to allow all businesses to operate at 100% beginning March 10.

"Twice before when I had the legal authority to open our local businesses, I immediately opened them that same day," Judge Andy Eads.

Denton County has never issued a mask mandate and will follow the state's guidelines, officials said in a release.

#NEW Nearly ONE YEAR after issuing a Declaration of Local Disaster for Public Health in response to #COVID19 @JudgeChrisHill of @CollinCountyGov has rescinded the order. @wfaa pic.twitter.com/VIhNVGT0Up

In Tarrant County, which is forecast to go over the 2,900-death mark from COVID-19 Wednesday, County Judge Glen Whitley also rescinded the county's mask order.

“There's absolutely nothing I can do about it. [Abbott] did it. It's his decision,” Whitley said. “And he basically did it in such a way as to not allow local officials to deal with their local areas.”

Whitley told WFAA that he had hoped the governor would wait until after spring break to rescind the mask mandate.

“I believe very strongly in local control, and this governor believes very strongly in running everything from the Capitol. And I just don't think that's the best place in the world to run it from,” Whitley said.

“It's my [mask] order, so I simply just rescind it,” Whitley said. “And then the Commissioners Court -- they'll talk about it next week, I'm sure, but we're just going to go ahead and do it right now. There's no use in keeping it in play when the governor is saying we're going to do away with it."

"I’ve been saying this: Somebody telling you or not telling you by an order should not be the reason why you do something. This is the right thing to do for your family, for your friends, for your neighbors.

"Until we put COVID away for good, I think all of the public health measures, which include wearing a mask, social distancing, avoiding large crowds and washing our hands: I think they all need to be done, together with getting vaccinated when your time comes. All of these together will put a lot of downward pressure on COVID and put it away for good."

In Fort Worth, Mayor Betsy Price said in a news release she was withdrawing a planned agenda item relating to a mask order for Tuesday night's city council meeting.

But she followed that up with a state calling Abbott's executive order "premature," and calling for people to continue following the CDC's recommendations to wear masks, social distance and wash hands frequently.

In light of the Governor’s Executive Order today, which I believe was premature, and an anticipated increase in vaccine supply in Texas in the coming weeks, two things are vital going forward.

First, we must continue taking all of the same safety precautions recommended by the CDC, including mask-wearing, social distancing, hand washing, etc.

Additionally, I am calling on Governor Abbott to open up additional vaccine tier categories so that more people are eligible to get a vaccine if they want one. As the State’s directive has changed, so must our response. Now, more than ever, vaccines and testing must be readily available.

Congressman Colin Allred (TX-32) questioned where Gov. Abbott was getting the medical advice necessary to make such a decision.

“Texas has made progress in the fight against Covid, due in large part to statewide efforts that have limited the spread of this virus, helping to keep Texans safe and healthy. With our state just months away from widespread access to the vaccine, the Governor’s move today jeopardizes the progress we have made and unnecessarily puts lives at risk," he wrote in a news release. "Just yesterday, the CDC noted we are facing more contagious variants and urged state leaders not to do this exact thing, which begs the question: whose medical advice is the Governor relying on?”

Lieutenant Governor Dan Patrick called the decision "one step closer to a return to normalcy":

"The Texas economy is coming back stronger than ever and Governor Greg Abbott’s announcement today will help us restore the livelihoods of millions of Texas even faster. Texas has proved what I have said throughout this long year of the pandemic — we can do two things at once  — maintain our economy and fight COVID-19. Today, Texas is one step closer to a return to normalcy," he wrote in a news release.

Congressman Joaquin Castro (TX-20) said this decision will be deadly for Texans.

"Governor Abbott’s failure to listen to science and medical advice will cost Texans their lives. This decision is reckless and dangerous—and a desperate distraction from the Governor’s dereliction of duty during the power outages. He’s putting politics above the people of Texas," he tweeted Tuesday.

“Governor Abbott has shown tremendous leadership throughout this pandemic, and that leadership continued today. Texas will remain the best state in the nation to do business and raise a family.”

“What Abbott is doing is extraordinarily dangerous. He is the worst Governor in modern Texas history. This will kill Texans. Our country’s infectious disease specialists have warned that we should not put our guard down even as we make progress towards vaccinations. Abbott doesn’t care.

“On this Texas Independence Day, once again Abbott’s actions are made independent of logic or reason. From leaving Texans to literally freeze to death, to letting a deadly virus have an open season on our residents, Governor Abbott has proven many times over that he neither understands the struggles of everyday Texans, nor does he care about doing his basic duty to protect them.

“What Abbott calls pro-business is anti-people. Make no mistake: opening Texas prematurely will only lead to faster COVID spread, more sickness and overcrowding in our hospitals, and unnecessary deaths. There is no economic recovery without beating the coronavirus pandemic. This will set us back, not move us forward.

“By removing all previous state mandates and opening the state to 100 percent, Governor Abbott, who has never taken this pandemic seriously, is doing what he does best: leaving Texans to fend for themselves."

Many districts in North Texas are still awaiting specific guidance from the Texas Education Agency, which supplied districts with health and safety protocols to return to classrooms safely.

"Gov. Abbott needs to quit obeying his political impulses and listen to the health experts, who are warning that it is too soon to let our guard down without risking potentially disastrous consequences. The experts caution us to continue the safety practices that have worked against this disease, including widespread mask use and social distancing.

"The Texas State Teachers Association urges the governor to keep his mask mandate in place, especially in our public schools, and see that it is enforced. We also repeat our call for the governor to give teachers and other school employees priority for the COVID vaccine."

“Lifting the mask mandate at a time when most educators still don’t have access to a COVID-19 vaccine and are anxious about being in close proximity to large numbers of students and fellow staff only adds stress to the already crushing pressure placed on our school employees during the pandemic,” said Shannon Holmes, ATPE Executive Director. “This ill-advised move is likely only to prompt educators to resign or retire.”