Live COVID-19 updates: Most of North Texas to be under 'stay at home' orders as cases cross 300-mark

Seven people in North Texas who had COVID-19 have died thus far, according to health officials. 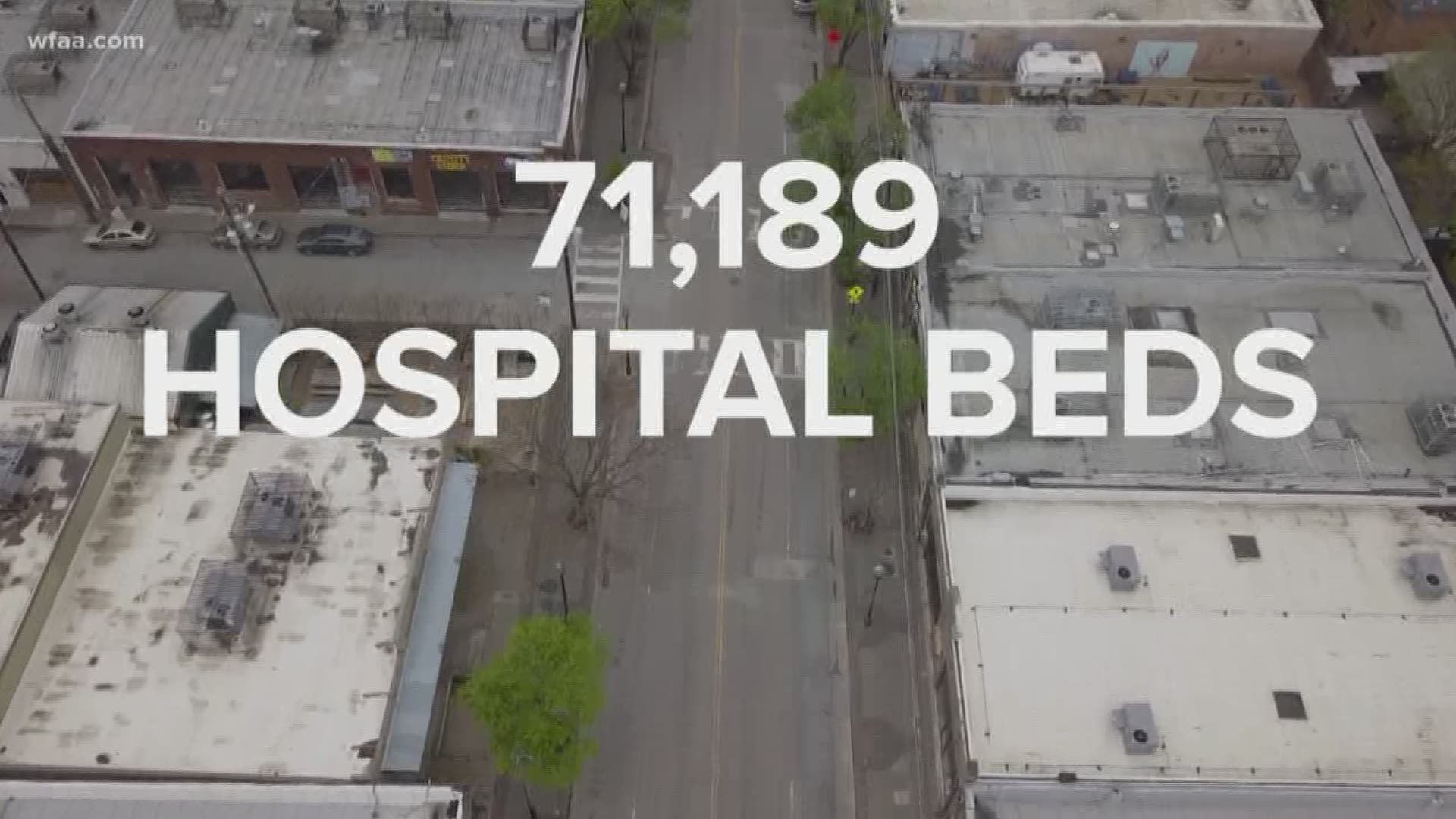 More than 300 positive cases of COVID-19 have been reported in North Texas, including seven deaths. That number is expected to increase as new testing centers open to the public and more people are able to get tested.

Dallas County began its shelter-in-place order at 11:59 p.m. Monday, shutting down all non-essential businesses and requiring residents to stay at home except in certain circumstances.

Exceptions include trips for medical care, to the grocery store, outdoor exercise and or other events that contributes to the health or safety of the people — all while maintaining social distancing.

Collin, Denton and Tarrant County leaders each followed Dallas' lead, all issuing their own versions of "stay at home" orders Tuesday morning.

The efforts are all in order to help flatten the curve of the spread of the virus so that sick patients do not overwhelm the area's healthcare system.

County Judge Todd Little issued a "Stay Home, Stay Safe" order as a part of an amended disaster declaration March 24 that begins at 11:59 p.m. on March 25. Restrictions include people staying inside their homes unless shopping for essentials. Non-essential businesses are ordered to close.

Tuesday night, city officials confirmed there are two positive COVID-19 cases in Kaufman County. The city then issued a "shelter in place" order.

The University of North Texas Health Science Center at Fort Worth (HSC) has opened an off-campus, drive-thru COVID-19 testing site for Tarrant County area first responders who may have been exposed to the novel coronavirus.

The drive-thru testing site is a partnership that includes HSC, Catalyst Health Network, the Fort Worth Fire Department and Keith Argenbright, M.D., Professor at UT Southwestern and Director at the Moncrief Cancer Institute, according to the news release.

If you're looking for work in Dallas County, call this number

Near the end of the first full day that Dallas County's shelter-in-place rule was in effect, county judge Clay Jenkins held a press conference Tuesday night with Dr. Philip Huang and Peter Urbanowicz, who has been named the Special Advisor for Integrated Health System Response for the county.

Jenkins thanked the county for staying at home, and said that anyone who was looking for work right now should call the Texas Workforce Commission at 1-800-939-6631 or visit its website to see available jobs that are deemed "essential" during this pandemic.

"These are hard decisions, we understand that, but we have to be guided by the science. I hate that people can't get to work," Jenkins said, adding that he estimates about "5.6-5.7 million people out of 7.6 million people who live in North Texas are under orders similar if not identical to the one Dallas passed."

"But it's important for all of us...that all the counties work together. This disease is not going to appreciate a border."

As Jenkins held this press conference, the county's second testing site at Ellis Davis Field House reached its federal capacity of 250 tests per site per day.

Jenkins also asked any retired healthcare professionals to step forward and volunteer to help out.

Urbanowicz also said that the Dallas County Medical Society and the hospital systems have been working together to form solutions.

No statewide 'stay at home' order

Gov. Greg Abbott said Tuesday that he doesn't currently plan to implement a statewide ban on gatherings and order for people to stay home, but he encouraged people to limit their movements to stop the spread of the novel coronavirus.

There have been 11,000 tests conducted across the state, a significant increase since Friday when about 2,300 had been completed.

There are 715 confirmed cases of the disease, including 11 deaths, Abbott said. He said he expects the cases to increase as testing capabilities expand and results are confirmed. The governor said a new executive order requires all private and public testing facilities to release daily reports of how many tests have been completed.

Abbott was surrounded by boxes of masks and personal protection equipment when he spoke during an afternoon news conference. He said 10,000 masks and new gear will be delivered to health care workers.  He did express concern that he saw a lot of cars on the road Tuesday.

He said he receives data daily that he is using to decide whether to further restrict people's movements to stop the spread of COVID-19.

"Stay home unless you need to be out," he told Texans.

According to a news release email sent by the City of Dallas at 3 p.m., the COVID-19 testing facility at the American Airlines Center has already reached its federal testing limit for the day. The federal limit is 250 tests per site per day. Additional testing will start again Wednesday at 8 a.m.

If you are experiencing symptoms, you may still be able to get tested today at the Ellis Davis Field House at 9191 South Polk Street.

Denton County Public Health announced Tuesday that two more residents of the Denton State Supported Living Center have tested positive for COVID-19. This brings the total number of cases at the center to six, after four others were identified last week.

Texas Gov. Greg Abbott is expected to share an update Tuesday on efforts in the state to combat COVID-19. The news conference is slated to start at 2:30 p.m.

The Transportation Security Administration has confirmed a screening officer who works at DFW Airport has tested positive for COVID-19.

WFAA is reaching out to DFW Airport to find out additional details regarding the employee's current health condition.

Collin, Denton and Tarrant counties have joined Dallas County in issuing some variation of a "stay at home" order to limit gatherings and nonessential travel.

County leaders announced the new measures Tuesday in response to the spread of the novel coronavirus.

In Denton County, residents have been told to stay home. Only essential businesses will stay open after the order goes into effect at 11:59 p.m. Wednesday.

Denton County Judge Andy Eads said the measure "can save your life, the life of a friend or a family member."

In Collin County, residents have been told to stay home but Judge Chris Hill said "all businesses, all workers are essential to our local economy."

Collin County's order does not distinguish any particular business as "essential" as other county and city orders have. Hill said that businesses should stay open as long as they comply with the statewide executive order put in place last week.

The statewide executive order limits gatherings to fewer than 10 people and order the closure of all bars, theaters, gyms and dine-in restaurants.

Of those 71, 67 are active cases, three people have recovered and one person who had the disease has died, according to health officials.

The death occurred in Arlington, where there are 14 active cases at this time.

One person in Benbrook has recovered, county health officials said. A White Settlement resident and a Southlake resident are the other two people to have recovered since contracting the virus.

There are 24 active cases of the disease in Fort Worth and five in Mansfield. There are four cases in Keller and Southlake. There are three in Colleyville and two each in Euless, Grapevine, Haltom City, Keller, Lakeside and North Richland Hills. Forest Hill, Grand Prairie and Watauga each have one case, according to the county. Two cases are also in unincorporated areas of the county.

A woman in her 70s who had chronic high-risk health conditions has died from COVID-19, county health officials said.

Her death marks the fifth in the county from the disease.

"We simply must flatten the curve and save lives," Whitley said. "No amount of economic activity is worth loss of life."

Residents should only leave home for essential activities and work, Whitley said.

Those essential activities can include travel, business, government service or critical infrastructure, according to the order, or to perform 'minimum basic operations.'

All businesses that are not considered essential will be required to close to the public, but will be allowed to continue "minimum basic operations" as long as social distancing is maintained.

The public will be allowed to leave their homes for outdoor activity, but all gatherings of any group of people that don't live together have been banned under the order.

"We have been in communications with all of our mayors and we are all on the same page as we move through this," Whitley said.

The order will be in effect starting at 11:59 p.m. Tuesday through April 7, county officials said.

The mayor of Fort Worth had already announced earlier that morning that the city would be under a similar order to stop the spread of COVID-19.

Mayor Betsy Price urged people to stay home unless they are picking up medical supplies or groceries. And she said people should work remotely if they are able.

Arlington Mayor Jeff Williams also announced that the city is working on a similar order to reflect what Fort Worth is implementing. 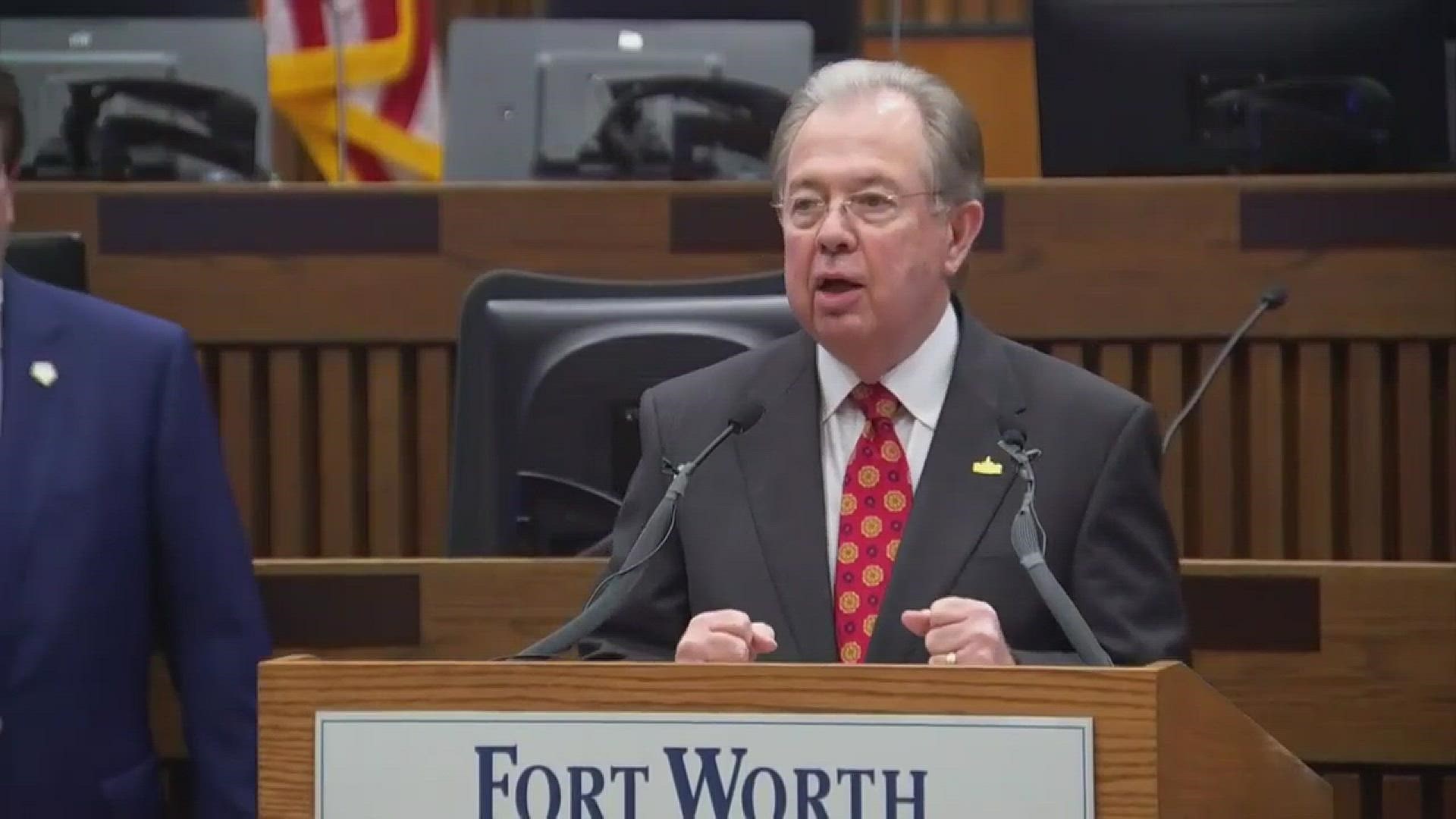 RELATED: Fort Worth issues 'stay at home' order to stop spread of COVID-19

Hidalgo made the remarks while announcing a new "Stay home, Work safe" order for both the City of Houston and Harris County. The order is similar to what many other communities are referring to as a "stay-at-home order" or a shelter-in-place.

Similar to Dallas County, restaurants will remain open for takeout, delivery and drive through. Daycares that provide support for essential employees will also remain open.

Health officials reported seven new cases of COVID-19 in the county on Monday, raising the total to 45.

None of the seven people had previous underlying health conditions, officials said.

A 43-year-old McKinney man has been hospitalized, while the rest are self-isolating.

As hospitals across the country prepare for a rise in COVID-19 patients, many healthcare systems are facing possible equipment shortages.

Businesses have stepped in to fill that void-- distilleries have begun to create items like high-proof alcohol for sanitizer, including right here in North Texas.

Now, Dallas County Judge Clay Jenkins is asking more businesses in the area to get involved and work with the county.

"If you can retool to make hand sanitizers, PPEs, [ventilators] or have donations or other help, please use the link," he tweeted.

The Garland City Council held a special session on Monday to issue a shelter-in-place order. The order will last through midnight April 7, city officials said, and requires residents "to stay at home for all but essential work and shopping."

Under the order, people who live in a household with someone who has tested positive for the disease will be ordered to remain in isolation, according to city officials.

The council created a list of essential businesses that can continue to work, as well as a committee that can respond to appeals regarding this list.

Council members also decided to push back the city's general elections that were originally scheduled to be held on May 2. Those will now take place on Nov. 3. The voter registration will, therefore, be extended until Oct. 5.

City officials also said during the special session that the city will not disconnect electric or water service for late or lack of utility bill payments, though they do ask customers call or email to discuss their situation.

Six Garland residents have tested positive for COVID-19 so far, according to the Garland Health Department. The most recent patient is in their 60s.

While most of Garland is covered under the already-existing order from Dallas County, small parts of the city are in Collin and Rockwall counties.