One of the new Dallas County cases announced Monday is linked to "community spread." 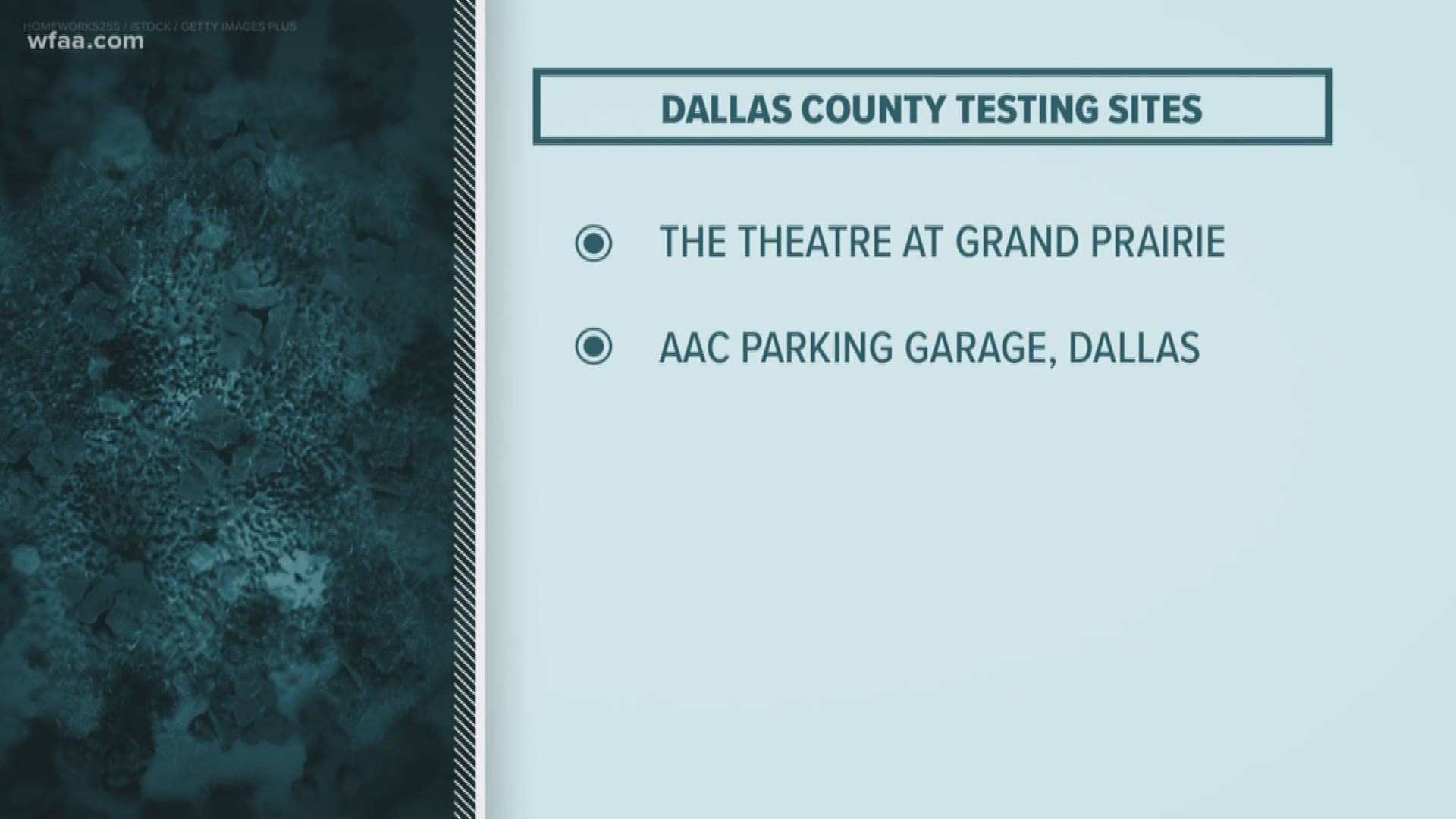 This story is from March 16. For the latest updates, click here.

The City of Dallas has ordered the closure of all bars, lounges, taverns, gyms and theaters. Additionally, the Dallas Independent School District has announced it is closing indefinitely.

The measure is in place for at least seven days. It will be up to the Dallas City Council to determine whether the regulation will stay in place longer.

Mayor Eric Johnson announced the measure Monday afternoon hours after another case of community spread was confirmed in Dallas County.

As part of the decision, the local government entities are limiting all gatherings to 50 or fewer people, beginning at midnight.

Johnson also said that the new restrictions will ask for the closure of dining rooms. Restaurants will now be to-go only.

The City of Fort Worth also announced Monday it would enact a mandatory reduction in the occupancy limits of local businesses.

DISD said Monday afternoon it was closing all schools indefinitely to slow the spread of the disease, based on advice from Dallas County Health and Human Services.

Teachers are working to start distance learning and are coming up with a plan to distribute meals at a number of campus locations.

DISD is the second-largest district in the state and has more than 155,000 students.

One of the cases is likely due to community spread, health officials said. Four of the cases are linked to "domestic out-of-state travel."

A 77-year-old man who was previously diagnosed with the novel coronavirus in Dallas County has already been released from the hospital.

His was the first recovery reported in Dallas-Fort Worth.

Dallas County Judge Clay Jenkins said in a news conference Monday that there will soon be two new drive-thru testing centers in the Dallas area, one in Grand Prairie at the former Verizon Theater and one at the American Airlines Center in a parking garage.

"We will get more information on that in the coming days and we will make an announcement about that, but we think it's important for you to know there are good things happening too.

"With those two new facilities that will open, those will be a joint operation with the county and the city and the federal partners and that will be led by our county hospital, Parkland Hospital along with Dr. Huang."

Jenkins said that will allow healthcare professionals to test up to 5,000 people a week.

Watch more in the video below. 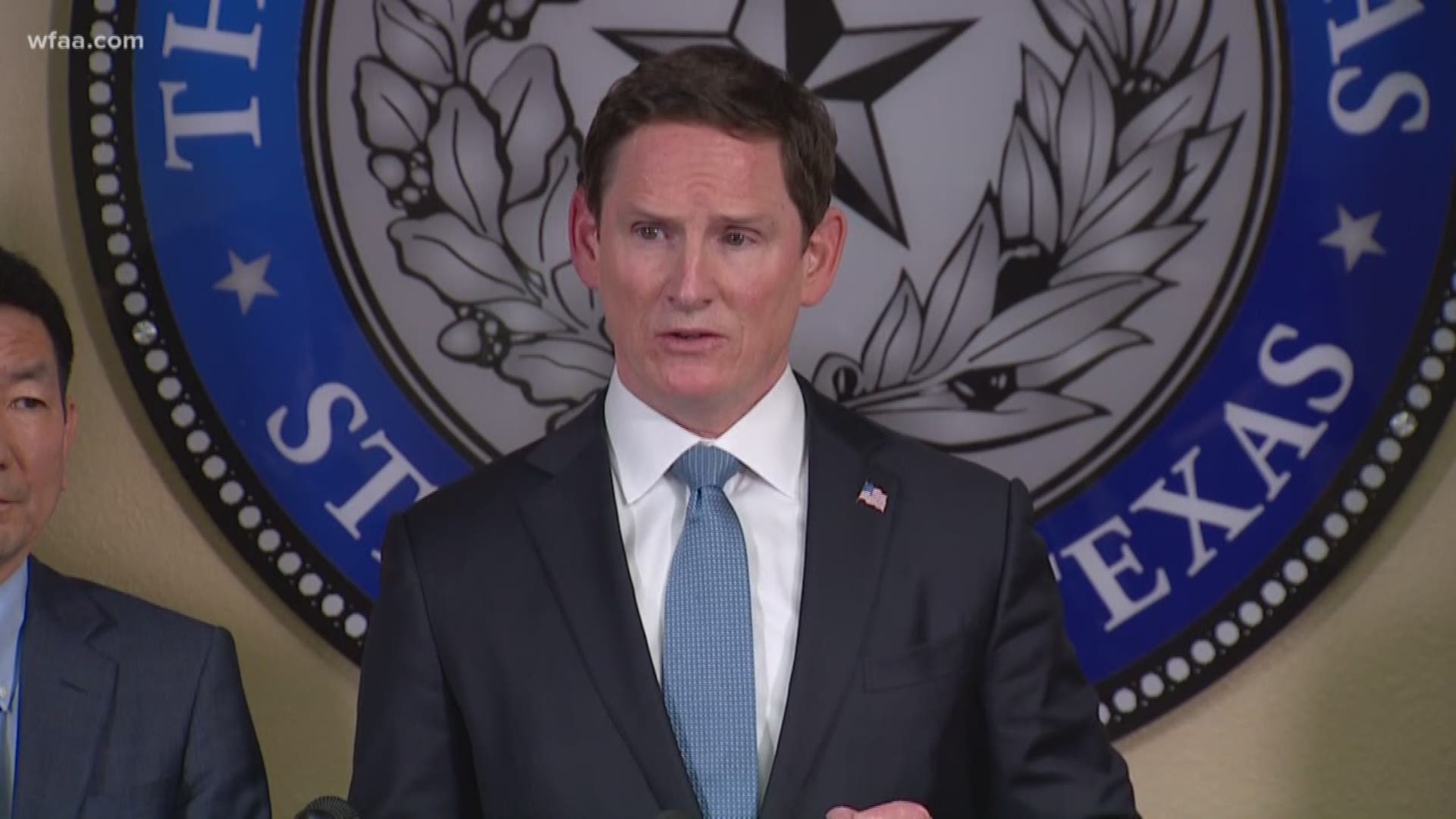 Tarrant County officials said Monday that a fifth positive case of COVID-19 has been identified.

A resident of Tarrant County contracted the disease on a trip outside of Texas, then developed symptoms when they returned home.

This person has now tested positive.

“This fifth case has been isolated at home after developing symptoms,” said Tarrant County Public Health Director Vinny Taneja, in a release.

Gov. Greg Abbott and other state and local officials came together in San Antonio to give an update on what Texas is doing to combat COVID-19.

As of Monday morning, the state had 57 confirmed cases across 15 counties. So far Abbott says, around 200 people have been tested in Texas and another 300 are currently being tested.

The county announced Monday that there were five new positive tests for COVID-19, bringing the total number of cases in Dallas County to 19. Four of those positive tests were of out-of-county residents.

Three of the people are Dallas residents, one is a Farmers Branch resident and one is from out of state.

“Significantly, there’s another likely case of community spread among the five cases we are reporting today," Dallas County Judge Clay Jenkins said in a written statement.

County health officials said the tests will no longer need to be sent to the Centers for Disease Control and Prevention for confirmation.

Collin County was the first to announce a case but is the last of the four big counties in Dallas-Fort Worth to issue a disaster declaration.

The county has recorded eight confirmed cases of the novel coronavirus, according to health officials. There are 82 people under monitoring in the county as of Monday.

The mayors of Allen, Frisco, McKinney and Plano also issued similar declarations in cooperation with the county. That means many public facilities will be closed starting Monday or Tuesday as a result.

Officials hope it will help the county be better positioned to respond to public health emergencies that arise out of the COVID-19 pandemic.

He also requested that the Department of Education waive federal testing requirements for the school year as well as communities across the country deal with the COVID-19 pandemic.

"Your health and safety are top priorities, and the state of Texas will give school districts flexibility to protect and ensure the health of students, faculty, and their families," Abbott said. "We will empower schools to make the best decisions to protect their communities from COVID-19."

Defendants who are in custody will continue to have court procedures, officials said. Judges in the county plan to extend currently empaneled Grand Juries until April 27.

Schools could be closed through academic year due to COVID-19

Texas Education Commissioner Mike Morath told school superintendents and lawmakers Sunday to be prepared for long-term school district closures, potentially through the end of the school year, especially in areas where the new coronavirus has spread.

According to individuals who participated in two separate conference calls with the commissioner, Morath said he would still leave the decision up to local superintendents. This comes as hundreds of school districts announced they would suspend classes for at least a week, with concerns about COVID-19 spreading through their communities. --Aliyya Swaby from The Texas Tribune

Read the full story from The Texas Tribune.

The energy company announced Monday it would waive late fees and extend payment due dates, with no down payment required to help customers during the outbreak.

It will also reduce down payments and defer balances over five equal installments, officials with the company said in a news release.

The company will also provide additional bill-payment assistance for customers who need help paying a bill through its TXU Energy Aid program. If a customer is unable to pay their bill, they should call TXU Energy at 1-800-242-9113.

Despite the Federal Reserve's decision to slash interest rates down to zero on Sunday, futures for the Dow and S&P fell by about 5%, prompting a halt in trading.

Markets had gained some of last week's losses back on Friday, but those gains may not last long once the markets open at 8:30 a.m.

The tests will be by appointment only.

State health officials said Sunday there are at least 56 cases of the disease across the state. That number is updated at noon CST each day.

That case count is expected to rise, though, as it does not reflect the most recent numbers from county officials.