Hospitalizations overall have been increasing for the disease in Dallas County, according to officials. 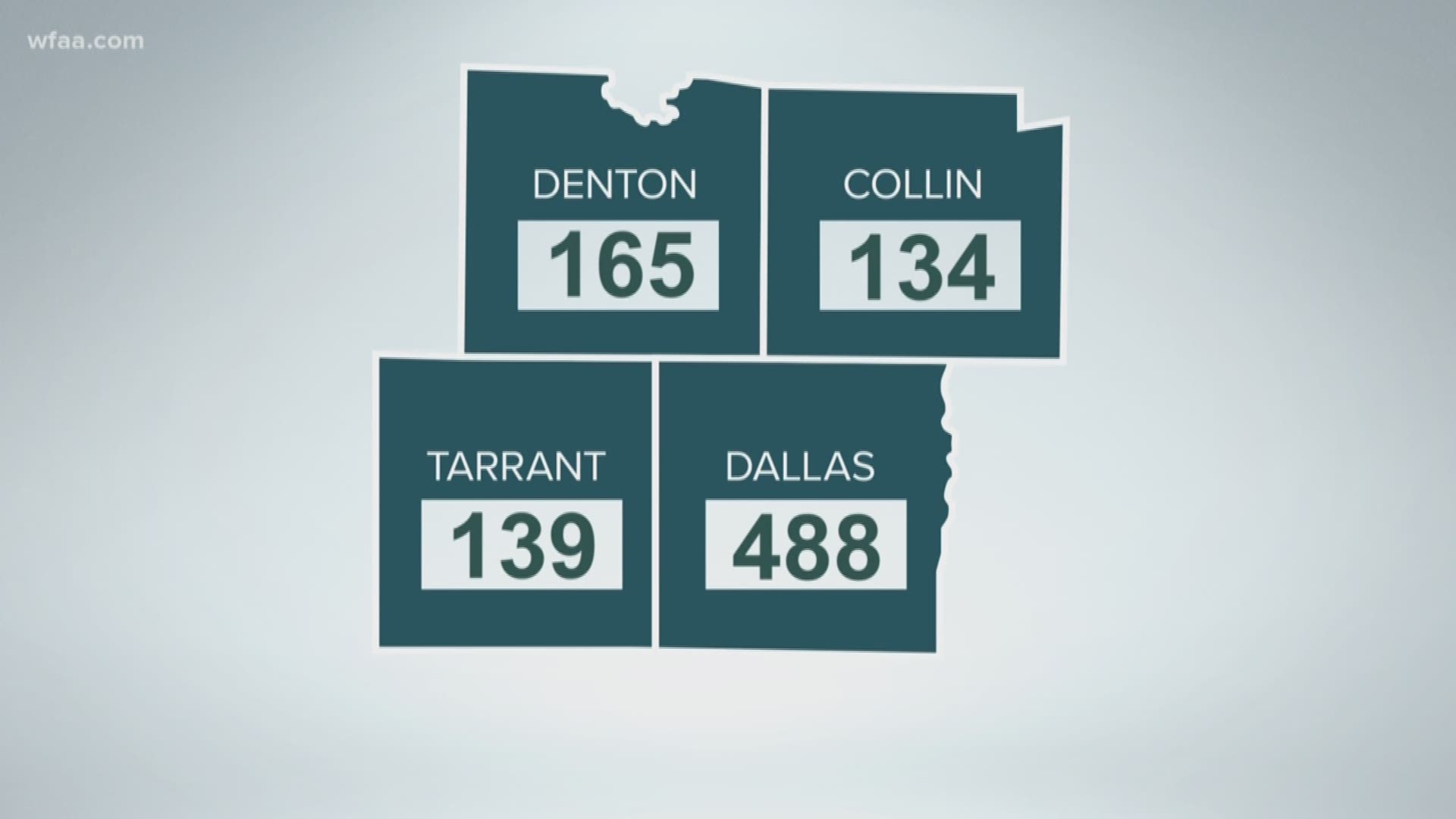 North Texas has officially passed the 1,000 mark for positive COVID-19 cases. But more concerning is the spread of cases occurring inside a number of care facilities across the region.

Those cases include 14 cases at one facility and four more — including two deaths — at a second in Dallas County, 12 at a care home in Arlington, and the biggest spread in Denton, where 49 residents and 22 staff have tested positive at a state-assisted living center.

During a Monday evening briefing, Dallas County Judge Clay Jenkins said nursing homes are the front lines of this fight, adding that it’s harder to stop the spread in these facilities.

Dallas County has been the hardest hit in North Texas, with 61 news cases on Monday, bringing its total to 549, and 12 deaths, less than three weeks after the county reported its first case.

The county is working with state and local officials to deal with the increasing need in the community. Jenkins says they have a list of 130 retired doctors and nurses who are willing to help efforts to combat COVID-19.

And on Sunday, Gov. Greg Abbott announced plans to remake the convention center into a field hospital, fully staffed by Navy personnel. The Kay Bailey Hutchison Convention Center is expected to be ready by April 10, Jenkins said, but could be ready for use sooner.

Hospitals around the state are also taking measures to increase their bed capacity to prepare for an expected increase in hospitalized COVID-19 cases.

Hospitalizations among people who contract COVID-19 have been rising in the Dallas County, according to officials. Almost two-thirds of the people who have been hospitalized have been either over 60 years old or have had at least one known underlying condition.

The problem will come, Jenkins says, when the first wave of healthcare workers contract the virus and have to step away.

The Dallas Police Department confirmed a third officer has tested positive for COVID-19. This officer works at the In-Service Academy and has been out of the office since March 18 when they felt sick. The officer is at home and recuperating and no other officer that worked with them has shown signs of the disease, police said.

Dallas County jails have total of 17 cases of COVID-19

Dallas County Judge Clay Jenkins said on a conference call Monday that a 114-bed COVID-19 unit is ready to open on top of the George Allen Court Building if needed. Jenkins also said he doesn’t think that non-violent drug offenders should be in jail right now.

There are a total of 17 positive cases of COVID-19 in Dallas County jails at the moment, Jenkins said.

"We are going to keep people in jail because of a violent crime, it should be now, not at any time in the past," he said.

He also added that a $50 million Parkland Medical mod is in use in the county jail now to help fight the virus and the Kay Bailey Hutchison Convention Center should be set up by this Friday or Saturday. Jenkins said he hopes to have it open by April 10, give or take a few days.

Child care facilities in Fort Worth open for essential workers

Parents employed by essential businesses can access an app for appropriate child care: find.bestplace4kids.com. The facilities on this app are vetted licensed child care facilities, officials said. No class will exceed more than 10 kids or adults. The app will be expanded to be available to all Tarrant County workers in the future, officials said.

Health officials in Tarrant County said an additional 16 cases have been confirmed, bringing the total in the county to 155 cases of COVID-19.

In addition, officials reported an additional 83 provisional cases. Provisional cases are lab confirmed, but are pending due to missing investigational data, according to Tarrant County officials. This number is new to their report.

There have been no additional deaths in Tarrant County, leaving the total at one.

Additionally, eight people have recovered from the novel coronavirus.

Manhattan Construction Company confirms they learned of a positive case of COVID-19 of a trade partner's employee on March 25.

Since learning of the positive test, the company has disinfected the affected work area and made changes to their processes to protect workers moving forward.

As of Thursday, all specialty trades personnel began entering the site at one location and had their temperature taken before being allowed inside, according to the company. They will also have to wear a wrist ban that shows they entered the site properly.

The work day is now limited from 7 a.m. to 5 p.m. and cleaning is taking place through the day, Manhattan Construction Company said.

Deliveries are also happening through a single point of entry, company officials said.

The Northwest Independent School District's trustees voted to postpone the district’s school board and bond elections to the Nov. 3 elections during a special video meeting Friday, district officials said Monday.

"This action will allow district residents to abide by county shelter-in-place proclamations and social distancing recommendations," a news release said. "Though the vote on this bond referendum is very important to the district, the NISD Board of Trustees wants to make sure the health and safety of voters and election workers are maintained."

Fort Worth to close all basketball, volleyball courts

The Fort Worth Park and Recreation Department announced Monday that it would close all the basketball courts and volleyball courts throughout the city in an effort to maintain social distancing practices.

Mayor George C. Fuller confirmed to WFAA that one of his family members has tested positive for COVID-19.

The mayor and his entire family will be tested and is quarantine while they await the results.

RELATED: How to make sure you actually get your coronavirus stimulus check