Dallas County is waiting on additional testing materials and reagents for labs at UT Southwestern and Parkland, which could provide an additional 6,500 tests a day. 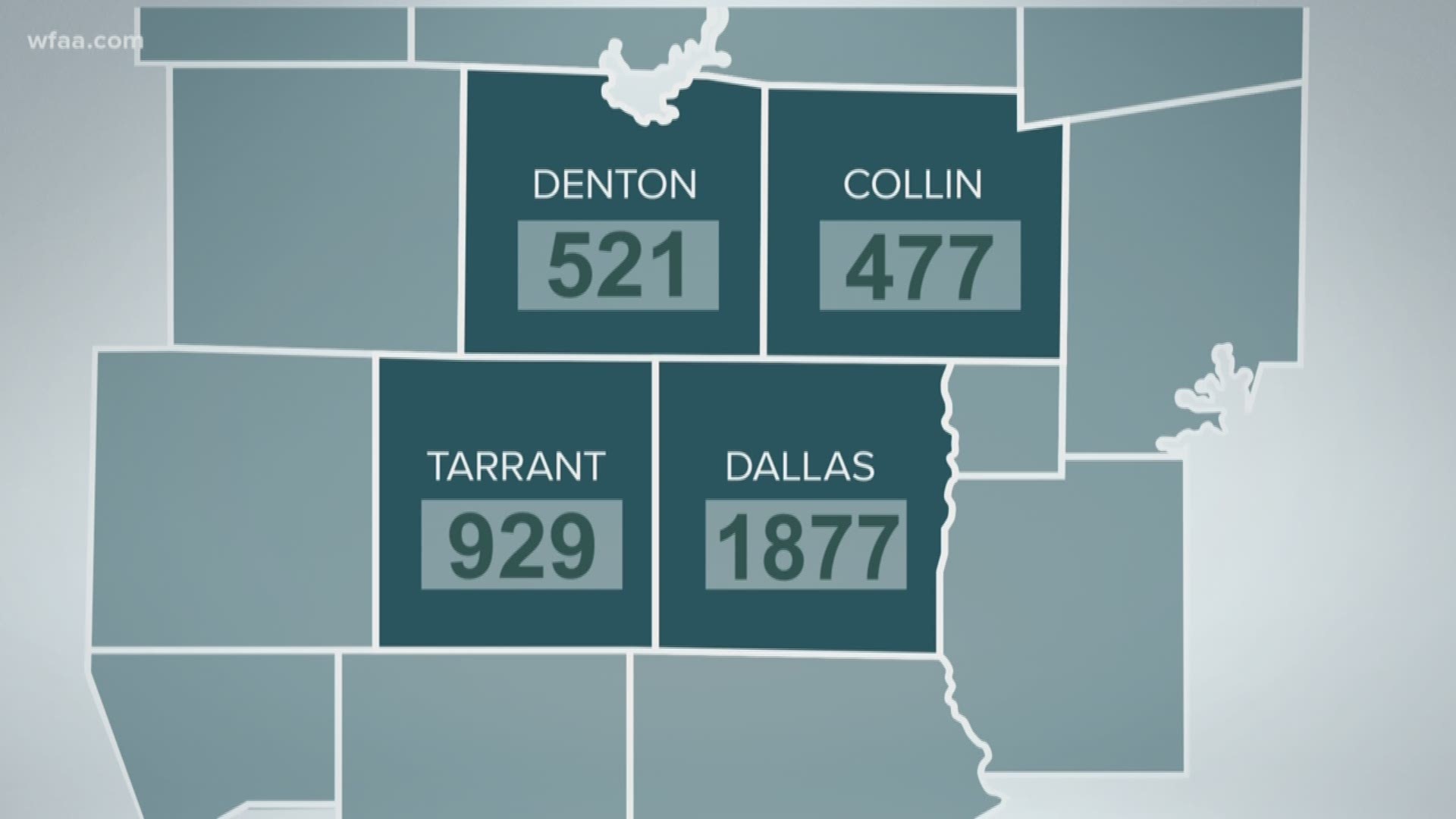 Testing capacity for the new coronavirus in Dallas County will more than double in coming days, according to Judge Clay Jenkins.

Jenkins tweeted that U.S. Health and Human Services has given Dallas County permission to up the number of tests at each of its drive-thru sites from 250 to 500. He said they are waiting to receive an official letter authorizing this increase.

Additionally, Jenkins tweeted that Walgreens will be opening two testing locations of its own — one at 2060 S Buckner Boulevard in Dallas and a second at 8600 Camp Bowie West in Fort Worth. Both of those locations will be able to provide 160 tests a day at no cost.

Jenkins said they are still waiting on test materials and reagents for the labs at Parkland Hospital and UT Southwestern Medical Center. Once those locations are fully stocked, they'll be able to provide 6,500 tests a day with same-day results. Those tests would be offered at sites across the county.

Jenkins did not give a timeline for when those materials are expected so testing can begin.

Another person has died from the novel coronavirus in Dallas County, health officials said Wednesday.

There are also 109 additional positive cases of COVID-19 in the county, according to the latest data. This brings the total case count to 1,986.

A Garland resident in her 80s is the 43rd person to die from the disease in Dallas County.

Officials say she had been hospitalized and did not have underlying high-risk health conditions.

On Tuesday, Judge Clay Jenkins said he believes Dallas is "in the middle" of its coronavirus fight since the number of reported cases has remained steady each day.

Jenkins also said the peak is projected for the end of April or early May.

The Dallas Police Department is the latest law enforcement agency to announce that two more officers have tested positive for COVID-19.

The command staff was notified Tuesday that a 10th and 11th officer within the department have tested positive, officials say.

The 10th officer to test positive works at the southeast patrol and has not been at work since April 2.

Dallas police officials say out of an abundance of caution, the officer has been in quarantine since April 2 because the officer’s work partner had previously tested positive.

Dallas police say the officer will continue to stay home for an additional 14 days or more until cleared to return by DPD’s medical team.

According to Dallas police officials, the infected officer didn’t pose a threat to other employees because they had not been to work in 12 days.

The 11th officer to test positive is a background detective whose last day of work was April 11. The officer began experiencing symptoms of coronavirus after going home Saturday and went for testing. The officer learned of those test results on Wednesday.

The officer is also under quarantine for two weeks or until cleared by DPD's medical team. The area where the officer worked was sanitized by a professional contractor, the department said.

The department also has two civilians at the department who have tested positive for COVID-19. They work as a communications dispatcher and a public service officer.

"Please keep the officers and civilian employees in your thoughts and prayers for a full recovery," the department said in a statement.

RELATED: Dallas police officer recovers from COVID-19, tells people to 'think of others'

The City of Dallas has launched a new COVID-19 resource and information hotline that is available 24/7.

The following information is available in English and Spanish:

Additional information can also be found on the City's website.

The new process allows the person being tested to swab shallowly in their nose, instead of a health professional collecting a sample from further up the nasal cavity, officials said.

"The self-swab testing method proves to be less invasive and is safer for patients and healthcare providers," incident commander Randall Payton said.

According to Dallas officials, a practice run of using the self-swab kits was conducted Monday at the Ellis David Field House.

"Health and safety are the primary goals for workers and those being tested. We’re confident this new method will decrease the risk of contamination," Payton said.

Dallas mayor calls for a citywide ovation for frontline workers

Mayor Eric Johnson is asking the residents of Dallas to participate in a public ovation for frontline workers in the COVID-19 combat.

Johnson requested that at 7 p.m. Thursday, the community step outside and applaud healthcare workers, police officers, firefighters, and other workers.

"We have heroes among us, and they deserve to know they have supporters all around them," he said on Twitter Tuesday afternoon.

The number of ICU beds in Dallas hospitals being occupied continues to increase, according to data released by Mayor Eric Johnson's office.

Twenty-five hospitals reported ventilator and bed capacity numbers to Johnson’s office on Tuesday. Johnson made it a daily requirement in late March for hospitals to report their numbers to his office.

Tuesday's data shows that 505 ICU beds are being used, this is 20 more beds than the day before, according to Johnson's office.

Below is an aggregate list of totals from the 25 hospitals: