The Dallas-Fort Worth area has reported almost 4,000 cases of the coronavirus. 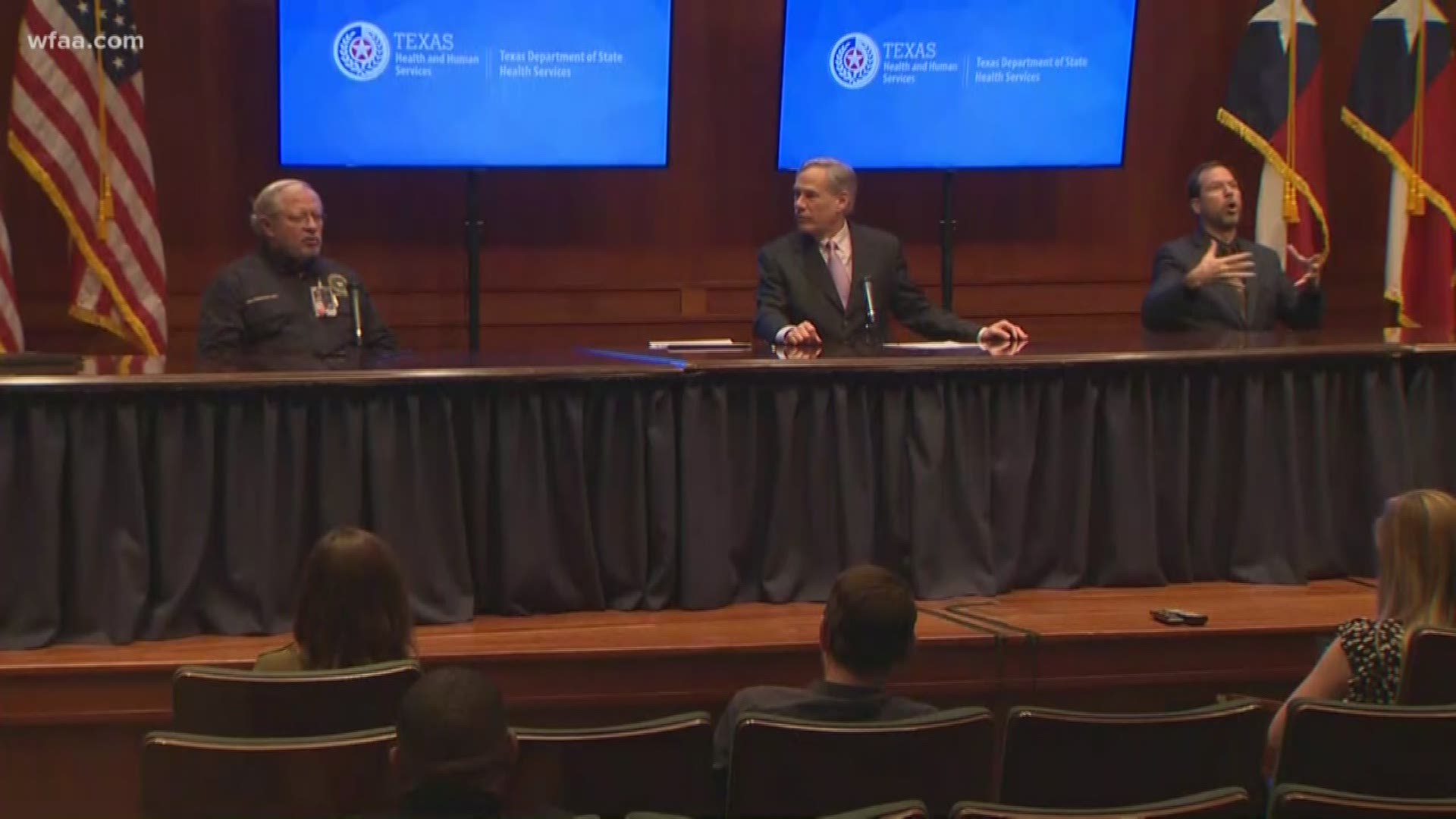 The governor, who has extended the statewide disaster declaration, said he's optimistic that the curve is flattening in the state.

While local health officials have said the curve likely won't flatten until late April or early May, Abbott said new cases seem to have peaked across Texas.

Abbott emphasized the number of people who have recovered from the disease: 2,269.

"Texas ranks second highest in the number of recoveries reported," the governor said.

He also said that across the country, fewer people tested positive in the past week than in previous weeks.

But, despite the optimism, Abbott said he's not ready for all businesses, entertainment venues, restaurants and workplaces to reopen.

"This is not going to be a rush the gates, everybody can reopen all at once," he said.

The governor's office announced an initiative to get loans to small businesses that have closed "as a result of our efforts to limit the spread of the coronavirus in the State of Texas."

A statewide executive order encourages people to stay at home, limits gatherings and only allows businesses deemed essential to remain open. The order is in effect until April 30.

The governor’s office partnered with Goldman Sachs and the LiftFund, along with other community development institutions on the effort.

Abbott hosted a news conference for the announcement Monday morning.

The loans will be made through the Small Business Administration’s Paycheck Protection Program (PPP) will be mainly used for payroll so that employees can continue to get paid and these affected businesses can retain their team.

About half of the hospital beds in Dallas are not occupied, data from Mayor Eric Johnson's office suggests. Twenty-four hospitals reported the total number of beds, ICU beds and ventilators they had in use on Sunday.

Of total hospital beds, 51% were occupied, while about 60% of ICU beds were in use. Around one-third of available ventilators were being used Sunday.

Notably, the total number of hospital beds, ICU beds and ventilators all increased from Saturday to Sunday. There were 61 more beds, 30 more of which were ICU beds, and 24 more ventilators, according to the numbers collected by the city.

Below are the total numbers reported to the city:

A woman in her 80s who lived at a long-term care facility in Dallas is the 32nd person in the county to die from COVID-19, officials said Monday. She had been critically ill at an area hospital and had had underlying health conditions.

The county also reported 65 new cases, though Dallas County Judge Clay Jenkins cautioned that number may be "artificially low" since some labs were closed on Easter Sunday.

The county has now reported at least 1,788 cases.

Officials reported 70 new cases in Tarrant County on Monday, bringing the total there to 876 cases since the outbreak began.

No new deaths were reported, and 103 people have recovered since contracting the disease, according to county numbers.

When it came to hospital beds, 113 COVID-19 patients were currently hospitalized in the county, officials reported.

Of the 5,714 total hospital beds, 2,763 are occupied across the county. About a fourth of the county's 822 ventilators are in use, county data shows.

RELATED: Lockheed Martin employee dies after being exposed to COVID-19

Over the weekend, two inmates at the Tarrant County Jail tested positive for COVID-19, according to officials. Both have been quarantined since their symptoms were first reported last week.

As the 15th largest jail in the nation, officials said they have enacted strict protocols to keep inmates and employees safe and prevent the spread of the disease, including steps like multiple mandatory daily temperature checks.

RELATED: Dallas County has most jail inmates who have tested positive for COVID-19 in Texas

Hunt County health officials have reported the first death from COVID-19, a woman between 31 and 49 with "underlying medical issues."

Officials said the woman was the 18th positive case of the coronavirus in Hunt County.

She had been hospitalized in critical care at Hunt Regional Medical Center in Greenville when she died, health officials said.

At least 85 people in the Dallas-Fort Worth area have died from the disease.

Officials in Dallas County on Sunday announced four more people had died from COVID-19, bringing the county's total to 31 deaths since the outbreak began. The county by far leads North Texas in the number of confirmed cases, with 1,723 reported.

But while Tarrant County has seen about half as many cases at 806, it's also had a high number of deaths from the disease: at least 25 of its residents have died after testing positive for the new coronavirus.

The Dallas-Fort Worth area has reported almost 4,000 cases of the coronavirus.

Those already on the plan will automatically receive a three-month service credit for their service line.

Those who are not currently members of the plan are also now eligible for the plan, which gives them priority access to the network. They can also get a $200 activation credit when getting a new smartphone on a new plan, company officials said.

"The COVID-19 health crisis illustrates precisely why public safety fought for the creation of FirstNet, the only nationwide high-speed broadband communications platform dedicated to and purpose-built for America’s first responders," a news release said.

Fort Worth ISD will move from daily meal distributions to twice weekly for families picking up meals for their children while the schools remain closed.

Pickups will be on Mondays and Thursday and each child will receive six meals at a time, with district officials saying it will help them better practice social distancing and better maximize everyone's time.

Students will be on holiday on Monday, April 13, so the first pickup will be on Tuesday, April 14 before the district moves to every Monday and Thursday.